DAMAGE TO FOUNDATIONS FROM EXPANSIVE SOILS 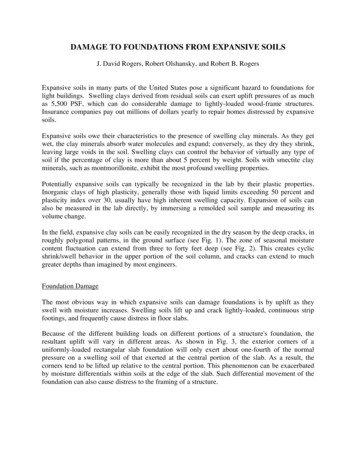 DAMAGE TO FOUNDATIONS FROM EXPANSIVE SOILSJ. David Rogers, Robert Olshansky, and Robert B. RogersExpansive soils in many parts of the United States pose a significant hazard to foundations forlight buildings. Swelling clays derived from residual soils can exert uplift pressures of as muchas 5,500 PSF, which can do considerable damage to lightly-loaded wood-frame structures.Insurance companies pay out millions of dollars yearly to repair homes distressed by expansivesoils.Expansive soils owe their characteristics to the presence of swelling clay minerals. As they getwet, the clay minerals absorb water molecules and expand; conversely, as they dry they shrink,leaving large voids in the soil. Swelling clays can control the behavior of virtually any type ofsoil if the percentage of clay is more than about 5 percent by weight. Soils with smectite clayminerals, such as montmorillonite, exhibit the most profound swelling properties.Potentially expansive soils can typically be recognized in the lab by their plastic properties.Inorganic clays of high plasticity, generally those with liquid limits exceeding 50 percent andplasticity index over 30, usually have high inherent swelling capacity. Expansion of soils canalso be measured in the lab directly, by immersing a remolded soil sample and measuring itsvolume change.In the field, expansive clay soils can be easily recognized in the dry season by the deep cracks, inroughly polygonal patterns, in the ground surface (see Fig. 1). The zone of seasonal moisturecontent fluctuation can extend from three to forty feet deep (see Fig. 2). This creates cyclicshrink/swell behavior in the upper portion of the soil column, and cracks can extend to muchgreater depths than imagined by most engineers.Foundation DamageThe most obvious way in which expansive soils can damage foundations is by uplift as theyswell with moisture increases. Swelling soils lift up and crack lightly-loaded, continuous stripfootings, and frequently cause distress in floor slabs.Because of the different building loads on different portions of a structure's foundation, theresultant uplift will vary in different areas. As shown in Fig. 3, the exterior corners of auniformly-loaded rectangular slab foundation will only exert about one-fourth of the normalpressure on a swelling soil of that exerted at the central portion of the slab. As a result, thecorners tend to be lifted up relative to the central portion. This phenomenon can be exacerbatedby moisture differentials within soils at the edge of the slab. Such differential movement of thefoundation can also cause distress to the framing of a structure.

Figure 1: Polygonal pattern of surface cracks in the dry season. These cracks are approximately one inch wide atthe top. Note sewer manhole in background.Figure 2: This crack is at least 32 inches deep. The yardstick was easily inserted to this depth; narrower, lessstraight cracks may extend much deeper.

Figure 3: A rectangular slab, uniformly loaded, will tend to lift up in the corners because there is less confinement.Figure 4: Damage to home supported on shallow piers. (1) At the beginning of the rainy season, the piers are stillsupported by friction with the soil. When it begins to rain, water enters deep into the soil through the cracks. (2)After 5 to 10 large storms, the soil swells, lifting the house and piers. (3) In the dry season, the groundwater tablefalls and the soil dries and contracts. As tension cracks grow around the pier, the skin friction is reduced and theeffective stress of the soil increases (due to drying). When the building load exceeds the remaining skin friction, orthe effective stress of the soil increases to an all-time high, adhesion is broken by this straining, and the pier sinks.

Drilled pier foundations have been used in California, Colorado and Texas since the late 1950s toreduce expansive soil damage. However, these types of foundations can also be adverselyaffected by expansive soil behavior if the piers are not sufficiently deep. Frequently, the cornerpiers of a pier-supported structure are lifted up during swelling in the wet season, and then breaktheir skin friction bond with the ground when the soil shrinks away from the pier in the followingdry season (Fig. 4). Loss of this "skin friction" decreases the pier's ability to support buildingloads. This straining to the soil can become great enough that the pier falls. To prevent this styleof damage, the piers must be drilled well below the zone of seasonal moisture fluctuation, andthey must be designed with the assumption that the upper portions of the pier will lose contactwith the adjacent soil.Shallow pipes, especially plastic pipes, buried in the zone of seasonal moisture fluctuation, areexposed to enormous stresses by shrinking soils. If water or sewage pipes break, then theresultant leaking moisture can exacerbate swelling damage to nearby structures.Concrete drainage devices can be adversely affected by expansive soils (see Fig. 5). Swellingclays can lift and crack concrete ditches, seriously impairing their ability to convey runoff.Subsequent contraction may leave a void under the concrete, leading to piping and erosion asrunoff flows under the ditch.Figure 5: Void created under concrete drainage interceptor ditch by contraction of clay soils.Expansive soils pose the greatest hazard in regions with pronounced wet and dry seasons. Theannual cycle of wetting and drying causes soils to shrink and swell each year. Thus, the aridregions of the country are much more susceptible to damage from expansive soils than regionsthat maintain moist soil conditions throughout the year.The biggest problem in expansive soil areas is that of differential water content. Sources of waterin developed areas are not limited to temporal weather cycles, but can be introduced by people.A frequent source of damage is the differential swelling caused by pockets of moist soil adjacentto dry soil. For example, lawn and garden watering creates a moist zone on the exterior of afoundation, whereas the interior is dry; this creates differential swelling pressure on foundationelements. There is frequently a moisture differential between the soils beneath a house and those

that are more directly exposed to changes in the weather. Cesspools, leaky pipes, and swimmingpools are other common sources of water.Mitigation MeasuresThe best way to avoid damage from expansive soils is to extend building foundations beneath thezone of water content fluctuation. The reason is twofold: first, to provide for sufficient skinfriction adhesion below the zone of drying; and, second, to resist upward movement when thesurface soils become wet and begin to swell.Successive drought years have demonstrated that the zone of seasonal fluctuation can extendmuch deeper than previously believed. Piers extending to depths of six feet can withstandnormal annual fluctuations, but do not appear adequate when taken over the long haul, such as atwo-year drought followed by an extremely wet year.Another way of mitigating expansive soil problems is to collect surface runoff and to limitsurface infiltration during the rainy winter months. In Orange County, California, considerableexperience in subdivisions has shown that it is important to provide for positive surface drainageaway from all points around building foundations. Much of this experience was incorporatedinto the Appendix Ch. 18 Excavation and Grading statutes of the Uniform Building Code (UBC),which were not adopted in the 2000 IBC.Case Study - Swimming PoolsSwimming pools constructed near home foundations in expansive clay soils are frequentlysources of damaging moisture. Such swimming pool shells are typically constructed of airblownmortar (gunite). The gunite skin of a swimming pool is rarely designed for swell pressuresgenerated by expansive clays. Furthermore, in all swimming pools the water percolates throughthe shell and adds significant amounts of water to adjacent soils. Since pools are generally in aridclimates, this creates a moisture differential which can be severe enough to differentially liftadjacent pool decks and house foundations, as shown in Fig. 6. It can lead to destruction of thepool itself.A design for a swimming pool shell in a highly expansive soil environment is presented in Fig 7.Pools of this design have been constructed at several locations in California with great success.Construction begins with overexcavation for the pool. The excavation is lined with a single sheetof Hypalon R or similar HDPE membrane material to provide a barrier for the collection ofmoisture that seeps naturally through the pool shell. A second line of defense consists ofcrushable Enkamat K to retard potential swelling pressures against the pool sides. This alsoserves as a vertical subdrain material to guide water to a central collection drain beneath the pool.This drain between the liner and gunite shell then feeds into a drain pipe to convey water off thesite. This system works best in sloping areas that can provide positive drainage from below thepool. The same design, however, could be used in flat terrain through the use of an impervioussump and automatic pump beneath the pool.Conclusion - A Problem That Can Be Solved

Expansive soils cause major damage to light foundations and associated structures. However,engineers have the ability to recognize swelling clay soils and to design structures that canwithstand the effects. Enlightened design of deep foundations, and effective drainage oflandscape irrigation and swimming pool leakage could dramatically reduce damage to newhomes. Grading codes and building codes need to recognize the hazards of expansive soils andprovide explicit mitigations.Figure 6: Pool shells always leak some amount of water from natural percolation through the structural gunite skin.If the pool is close enough to adjacent foundations, the entire building can be lifted differentially.Figure 7: A design for a swimming pool placed in expansive soils. A liner prevents pool leakage from seeping intoadjacent soils. The leakage is collected in a gravel drain beneath the pool and conveyed offsite via a drain pipe. Thecrushable Enkamat R retards soil swelling pressures against the sides of the pool and also aids vertical drainage.

supported by friction with the soil. When it begins to rain, water enters deep into the soil through the cracks. (2) After 5 to 10 large storms, the soil swells, lifting the house and piers. (3) In the dry season, the groundwater table falls and the soil dries and contracts. As tension crac

The Essential Guide to Cargo Damage - Shipping and

Restricted Use License for Foundations in Personal Finance .