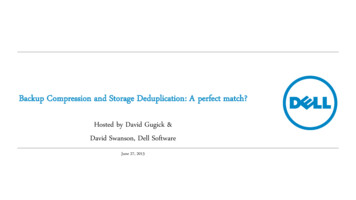 Deduplication Effectiveness Varies Variables that influence the dedupe ratio for a given workload include:––––The type of data being backed up: Not all data sets have the same amount of duplicate data or compressibilityThe frequency of backups: More frequent backups will build the dedupe dictionary more quicklyThe retention period for backup jobs: Longer retention yields higher ratiosThe types of backups: Full backups will dedupe better than differential or transaction log backups Estimated deduplication ratio– Ratio estimates range from 9-12:1 for databases – same as 90-92% compression– Not a lot of duplicate data between databases– Benefits with databases are largely due to chunk matches within a single database Retention recommendations– Keep only what you need: Don’t keep more backups simply to raise the ratios Full or differential backups?– Most vendors will estimate logical storage (dedupe ratios) based on whether the customer performs full backups or leverages differential /incremental backups5

Takeaways Backup compression and deduplication are a good match Test your environment– Your results will vary based on many factors including: Rated speed of appliance, network design, backup job coordination, compressibilityof the database, database data change rate– Don’t expect much deduplication between different databases – most of the benefits are gained from backups of the same database Deduplication storage appliances are almost always shared in an environment– A single test on a single database in the lab is not representative of production– Furthermore, running full backups on the same database 30 times in a row as a test is not representative of production either– Even with exclusive access to deduplication storage by DBA team, there will usually be contention from parallel backup streams You won’t know the full effect of performing uncompressed backups until you test– Maintenance windows and RTOs may be affected15

Takeaways Test using lightweight backup compression– Avoids CPU load on the database server– Allows the deduplication storage the opportunity for some extra dedupe– Avoid Adaptive Compression to maximize deduplication If backup and restore times are most important, don’t be concerned with actual storage consumed– At worst, it’s a wash. At best, you’re saving space with compression– Don’t be overly concerned with final deduplication ratios - don’t keep 30 days of backups for each db just to get better deduplication ratiosif you only need 14 days Consider reducing data backed up using differential backups– Reduces the data read from SQL Server, sent over the network, and processed by the storage– Reduced backup windows– Can be compressed just the same16

Jun 27, 2013 · – Don’t be overly concerned with final deduplication ratios - don’t keep 30 days of backups for each db just to get better deduplication ratios if you only need 14 days Consider reducing data backed up using differential backups – Reduces the data read from SQL Se