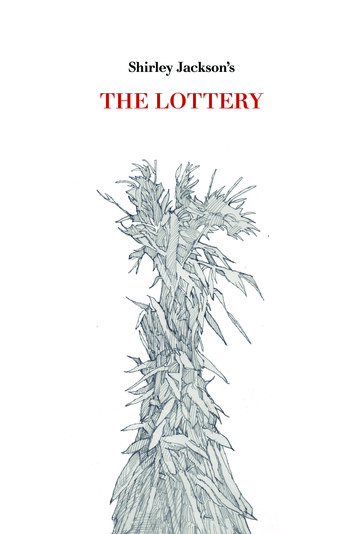 For my sister Gretchen.Hill and WangA Division of Farrar, Straus and Giroux18 West 18th Street, New York 10011Copyright 2016 by Miles HymanAll rights reservedPrinted in the United States of AmericaPublished simultaneously in hardcover and paperbackFirst edition, 2016Library of Congress Cataloging-in-Publication DataOur books may be purchased for promotional, educationor business use. Please contact your local bookseller orthe Macmillan Corporate and Premium Sales Departmentat 1-800-221-7945, extension 5442, or by e-mail ks.comwww.twitter.com/fsgbooks — www.facebook.com/fsgbooks10 9 8 7 6 5 4 3 2 1ivI would like to thank my wife Carole,my parents Corinne and Laurence,my children Juliette, Charlotte and Eliot.v

PrefaceBy Miles HymanVisits with my father often include a ceremony,a unique sort of family séance. The traditiongoes something like this: an ornate Victorianbox is carefully carried from its corner restingplace into the center of the living room. Thebox is placed on a table as my father and therest of us—his children and grandchildren—gather around it.By now even the youngest members of the family know whatis afoot: we are about to listen to Grandma Shirley’s music box.Etched with lace bunting and trim, roughly the size and shape ofan old-fashioned gramophone that has lost its bell horn, the objectwe see resembles a relic from Hill House itself. Fashioned fromdark exotic wood, the box has antique charm counterbalanced by avaguely menacing quality that glows through years of dusting andvarnish, making it inexplicably ageless—inanimate yet strangelyalive.After a careful winding up (which only my father is allowed to do),a metallic disk begins to rotate inside the box, a disk that is widerand thinner than a vinyl LP and riddled with an almost imperceptible stubble, the surface illustrated to the rim with the frolic ofsome long-lost Italian festeggiamento.vii

THE LOTTERY - PREFACETHE LOTTERY - PREFACEAt that point, something magical happens: the room fills with music, surging from the wooden box into the space around us. Thevast flow of sound is incommensurate with the modest object we’restanding around. The music itself—a highly ornamental arrangement of the once-popular tune “The Carnival of Venice”—is hardto describe, as if someone had condensed the ephemeral charm ofa thousand ancient carousels into one acoustic rush. The originalmelody is all but lost under layers of labyrinthine harmony andcounterpoint—an auditory experience so rich as to create what Ican describe only as a visual effect on the senses that is as arrestingas the box itself.Lottery” and “Charles” were one and the same! How could thelighthearted Raising Demons and the dark We Have Always Livedin the Castle have sprung from the same creative mind?The music box was probably already an antique during my grandmother Shirley’s lifetime and may indeed have been handed downby her mother, Geraldine—we grandchildren knew her as Grandmom—or from someone even higher up the Bugbee family tree.Whatever the facts of this obscure transmission, the music boxmust have seemed a relic even to Grandma Shirley—an heirloom,both elegant and vaguely sinister.My grandmother passed away unexpectedly during a nap on anAugust day in 1965. I was just shy of my third birthday. We reallynever got the chance to know each other in person and, to tell thetruth, I have only one clear memory of her: I see her sitting ona chair or stool in her kitchen in what seemed to me like a palatial Victorian house on upper Main Street in North Bennington,Vermont. She seems to be onstage, framed by a doorway in thedim light as she talks to someone I can’t see. Whenever I mention this image to my father or one of his siblings, they smile andnod in recognition. I’ve been told that typically, after a day spentwriting, doing housework, and parenting, Shirley would repair tothe kitchen to begin preparing the family dinner, always sitting onthe same stool, relaxing with a cigarette and a glass of J. W. Dantbourbon. It’s not much but it’s one of my earliest, most vivid memories—of her or of anyone, I might add.Beyond the haunting nature of the music itself, playing the musicbox is moving for other reasons. It represents a curious bond to theperson who is not there with us, the most notable absence in theroom: Grandma Shirley. It is perhaps the music box’s dual capacityto attract and to repel, to enchant and to terrify, that makes it sofascinating—such a fitting representation for an artist whose ownwork so deftly treads the line between light and darkness, betweenhumor and horror! That paradox—the dual creative vision thatallows contrasting qualities to coexist so comfortably, almost festively, mutually enhancing each other’s potent charm—permeatesso much of what both Shirley and her husband, the literary criticStanley Edgar Hyman, left behind them. As Shirley herself put itin an unsent letter to the poet Howard Nemerov: “I delight in whatI fear.” With time the mystery of her dual literary personae grewto be terribly vivid for me. How intriguing that the writer of “TheI grew up surrounded by the physical resonance of my grandparents’lives: stacks and stacks of books, mountains of mystery stories withharrowing covers, books on the occult, erudite studies on ancient civilizations and obscure scholars. There was a formidable collectionof blues and jazz records that filled an entire wall of the house Igrew up in and which my grandparents and father had put togetherwith the help of their dear friend Ralph Ellison—a collection thatincluded Child Ballads and old English folk songs that would haveplayed a fitting role in Shirley’s work.viiiixThen there are those intangible things they left behind, includinga ferocious love of Christmas, cats, cutthroat poker games, andspirited and intellectually rigorous (and sometimes stormy) dinner-table conversation. Most of the anecdotes are unverifiable—tainted evidence in the eyes of any seasoned researcher. But the

THE LOTTERY - PREFACETHE LOTTERY - PREFACEtruth is there somewhere, barely audible in the echoes of songsand dinner-party laughter, those late-night conversations aboutliterature, myth, and ritual, ragtime and bedtime stories, pressedbetween the pages of a coffee-stained literary review or swept under the rug of the bar at the Algonquin Hotel.naturally stands out, one of the most enduring works in Americanliterature. For me, as an artist who has spent much of his professional life adapting novels and stories into graphic form, it is only natural that my grandmother’s harrowing tale should entice over theyears—not only because, like the music box, it had become a sortof family heirloom but because of how precise and nuanced theadaptation of this powerful piece of fiction would have to be to succeed. The story is such a perfect apparatus that it leaves little roomfor meddling. Some books sprawl and dream and carry on in waysthat seem to invite imagery in spades. “The Lottery” does none ofthat—it is a no-nonsense, largely hermetic structure, words joinedwith a jeweler’s precision.There were always so many wonderful stories that included somany intriguing people: games of catch in the backyard with myfather and J. D. Salinger, all-night poker games with celebratedpainters and sculptors (debts were settled up with works of art ata time when Bennington College was the haunt of many an auspicious contemporary artist). There were countless dinners and parties with their closest friends—writers such as Ellison, Nemerov,and Bernard Malamud, to name a few. Brendan Gill, in his 1975memoir, Here at the New Yorker, describes an inebriated DylanThomas pursuing my grandmother through the house until Stanley, who had been trying to watch a baseball game on television,grew irritated by the spectacle and subdued the rowdy Welsh bardby grabbing hold of his suspenders.No one knew it then, but these were members of a disappearingtribe, an endangered species in the American cultural ecosphere:smoking, drinking, hard-partying mid-century intellectuals whowere passionate about politics and ideas, art and literature, sportsand good food. Between trips to New York City, where Shirley metwith her agent while Stanley, a staff writer for The New Yorker,turned in copy, their North Bennington home was filled with literary figures, artists, critics, musicians. Their dinners became legendary: arguments broke out about jazz, baseball, and books and weresettled over dubious wagers. They threw outrageous, imaginativecocktail parties and generally lived large lives at a time when livesseemed larger across the board.So for nearly three decades, I passed.Then a few years ago, while working on a graphic novel adaptationof James Ellroy’s The Black Dahlia, based on a masterful script byFrench comics writer Matz and the filmmaker David Fincher, Ihad a key insight into how I might adapt “The Lottery.” The bookyou are about to read represents both a faithful rendering of thestory and a complete visual restructuring of its delicate architecture, a meticulous visual retelling of the story in what is ultimatelyan entirely new language.The experience has been daunting and immensely rewarding forme, both as a professional artist and as a grandson who has longgrappled with this enigmatic, intangible inheritance. I waited thirty years to draw my grandmother’s “The Lottery,” but it was wellworth the wait.Of all the things left behind by my grandparents, Shirley’s writing is particularly vivid. Her iconic masterpiece “The Lottery”xxi

Frederick Jackson Turner, 'The Significance of the .