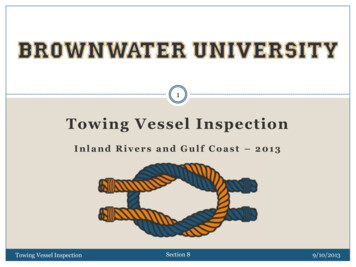 American Waterway Operators9 1998 – Made “Responsible Carrier Program” mandatory forits members. Must undergo 3rd party auditsBy 2000 all members had been audited (10% every 3 years)13 companies left the organization rather than face the audit.Towing Vessel Inspection9/10/2013

The Future of Auditing27 Following the evolution of the TSAC Subchapter M processthat began in 2004 that included: the review of 2 sets of draft language,the publishing of the NPRM in August of 2011,and the public hearings, It appeared there was an area of Subchapter M that neededmore attention9/10/2013

More Work To Be Done28 There were several issues to consider: Would there be enough qualified auditors for Sub M?How would they be trained?What would happen if there were 20 different accepted organizations, eachusing different methods for conducting audits and each and submittingdifferent audit reports?Could the Industry and Coast Guard reasonably expect consistency inauditing?With inevitable inconsistency could there be long-term acceptance of Sub M?What would be the fallout?Who would suffer most from any push back?9/10/2013

A Solution29 Formation of TVIB as a Professional Trade Organization forMarine Auditors and Surveyors to: Review credentials, experience and work historyDevelop a common audit tool for management and vessel auditsProvide Training on the Regulatory StandardSet Member Standards and GuidelinesAdvocate on behalf of the Auditor Member9/10/2013

What Is TVIB?30 Non-profit organization formed in 2010 Filed for 501(c)(6) in 2013 Two Member Categories: Auditor MembershipSupporting Organization Membership Member-owned and governed Organization was turned over to the membership in May of2013 and is now governed by the 21-member Board ofDirectors and an Executive Director9/10/2013

The AWO Responsible Carrier Program 32 Early Fall of 1993 – External and Internal Factors April 1994 – Development of the RCP April 1998 January 1, 2001 – 100% of the AWO Carrier Members werein compliance SIDE NOTE – 2004 Subchapter M began 2008 – the board voted to get out of the auditoraccreditation business and later reaffirmed that decision 2013 - TVIB entered into a 10-year agreement to assumethe RCP Auditor Accreditation and Training Function fromAWO9/10/2013

AWO-TVIB Agreement Overview33TVIB will provide the following in connection with the RCP: Certification of Auditors Conduct initial and recertification training Address auditor questions concerning the RCP TVIB will not directly oversee auditor’s performance of audits Provide Continuing Education to the Auditors Develop and administer procedures for appeals and grievances Develop and enforce a substantive Code of Ethics Utilize an internal quality system based on an ANSI/Amer.Society of Quality Control Q9001-2000 or equivalent and attainISO certification9/10/2013

Tugs and Tows - A Practical Safety and Operations Guide