Norwegian Reveals How To Get A Free Upgrade And Long-haul . 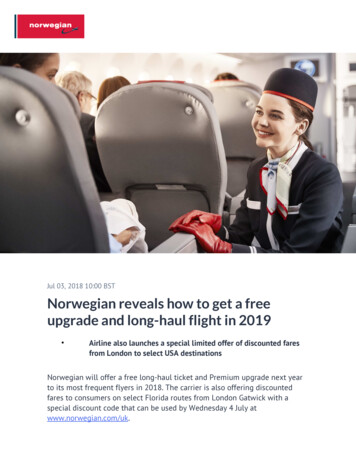 Jul 03, 2018 10:00 BSTNorwegian reveals how to get a freeupgrade and long-haul flight in 2019 Airline also launches a special limited offer of discounted faresfrom London to select USA destinationsNorwegian will offer a free long-haul ticket and Premium upgrade next yearto its most frequent flyers in 2018. The carrier is also offering discountedfares to consumers on select Florida routes from London Gatwick with aspecial discount code that can be used by Wednesday 4 July atwww.norwegian.com/uk.

Norwegian has grown to become the second largest long-haul airline atLondon Gatwick offering 13 long-haul routes with an average of 60 weeklydepartures to the USA, Argentina and Singapore. The airline’s award-winningloyalty scheme, Norwegian Reward, has amassed 1.1 million members in theUK. Members benefit from earning CashPoints when they book flights andpurchase services from Reward’s growing number of UK partners which canbe used to cover the cost of any Norwegian flight.Last year, Limited Edition Rewards first launched and gave NorwegianReward members a free long-haul flight or an upgrade in 2018. This year,Norwegian and Norwegian Reward are giving customers the opportunity tobenefit from free flights and extra comfort in 2019.The carrier reveals how:1. Join Norwegian RewardOnly Norwegian Reward members will be eligible to earn a free long-haulflight and Premium upgrade. The loyalty programme is free to join for allat www.norwegianreward.com2. Fly at least 10 round trips (20 one-way flights)To receive a free Premium upgrade, members must fly at least 10 round trips(20 one-way flights) on flexible tickets before the end of this year.Themember’s Reward Number must be added to the booking and CashPoints canbe claimed up to 30 days after departure.Premium is available on all 14 Norwegian long-haul routes from LondonGatwick and includes lounge access, fast track and more than a metre oflegroom as part of a high quality upgraded service. The free upgrade can beredeemed by booking Norwegian’s lowest long-haul economy fares whichstart from 149.90 one way. The upgrade must be booked by 31 January2019.3. Fly at least 20 round trips (40 one-way flights)

To receive a free long-haul ticket, members must fly at least 20 round trips(40 one-way flights) and have earned at least 3000 CashPoints on flighttickets in 2018.Norwegian flies modern Boeing 787 Dreamliners on all long-haul routes to11 US cities including Ft. Lauderdale (Miami), Orlando and Chicago and onthe UK’s only low fare flights to South America and Asia.The free long-haul ticket is a round trip LowFare ticket to any ofNorwegian’s destinations and includes seat reservation, meal service and achecked bag.Brede Huser, Managing Director at Norwegian Reward said: “Our most loyalcustomers can receive a free long-haul flight and upgrade to Premium as a thankyou for regularly flying Norwegian.“Our generous annual Limited Edition Rewards promotion builds upon itspopularity from last year and even if consumers aren’t able to qualify, they canstill earn CashPoints while flying in high quality comfort at unmatched fares toglobal destinations.”Norwegian Reward is also giving qualifying members the opportunity tocombine the free long-haul ticket and Premium upgrade. Qualifying membersmay instead use the free long-haul ticket to fly any of Norwegian’s short-hauldestinations. If a connecting flight is required to reach the desireddestination, Norwegian will cover one connecting flight each way.Customers can earn their way to Norwegian’s Limited Edition rewards onflights booked directly on Norwegian.com and through a travel agent, whenthe Reward number is applied to the booking.Florida flight saverHolidaymakers seeking a post-summer break in the Sunshine State can nowbook a discounted fare from London Gatwick to Fort Lauderdale (Miami) andOrlando using discount code: FLORIDAFALL18 by Wednesday 4 July 2018.The travel period is from September to October 2018, excluding weekends orpublic holidays, and flights are subject to availability.

Norwegian Reward won ‘Programme of the Year Europe/Africa’ for the secondconsecutive year at the 2018 Freddie Awards which marks the most voted forairline loyalty programmes.For more information visit ard.com/about-us/about-rewards/limitededitionNotes to editors*Terms and conditions apply The qualification period for the long-haul ticket and Premiumupgrade is the entire year of 2018The travel period for the long-haul ticket and Premium upgradeis the entire year of 2019, except for the following dates:From 1 January to 13 January 2019From 11 April to 24 April 2019From 14 June to 18 August 2019From 13 December to 31 December 2019 The free ticket is personal and may only be used by the Rewardmember/customer who earned it.The ticket is a round trip LowFare ticket to any of Norwegian’sdestinations and includes seat reservation and luggage. Mealsare also included on long-haul flights.The ticket follows the same fee, change and cancellationrestrictions as ordinary LowFare tickets.The trip must start and end at the same airport in the country inwhich the member resides.More details can be found at ds/limited-edition

About Norwegian RewardNorwegian Reward is the award-winning loyalty programme of Europe’s thirdlargest low-cost airline, Norwegian. The loyalty programme launched in 2007and currently has more than 7 million members worldwide earningCashPoints which helps reduce the cost of travel with Norwegian. NorwegianReward won ‘Program of the Year Europe and Africa’ and ‘Best Promotion’ atthe 2018 Freddie Awards and Airline Program of the Year and Best LoyaltyCredit Card Europe/Africa at the 2017 Freddie Awards. For more informationplease visit www.norwegianreward.comNorwegian in the UK and Ireland: Norwegian carries 5.8 million UK passengers each year fromLondon Gatwick, Edinburgh and Manchester Airports to 50destinations worldwideNorwegian is the third largest airline at London Gatwick, with 4.6million yearly passengers, and with more than 1,000 UK-basedpilots and cabin crewIn 2014, Norwegian introduced the UK’s first low-cost, long haulflights to the U.S. - the airline now flies to 11 U.S destinations,Buenos Aires and SingaporeIn 2017, Norwegian also launched affordable transatlantic flightsfrom Edinburgh, Belfast, Dublin, Cork and Shannon to the USEast Coast, using the brand new Boeing 737 MAX aircraftNorwegian is the only airline to offer free inflight WiFi on UKflights to more than 30 European destinationsThe airline has one of the youngest aircraft fleets in the worldwith an average age of 3.7 years, including next-generationBoeing 787 Dreamliner, Boeing 737 MAX and Boeing 737-800sNorwegian has been voted ‘Europe’s best low-cost carrier’ bypassengers for five consecutive years at SkyTrax World AirlineAwards from 2013-2017, along with being awarded the ‘World'sbest low-cost long-haul airline’ in 2015, 2016 and 2017Norwegian Reward is the airline's free to join awardwinning loyalty programme offering members CashPoints andRewards that reduce the cost of Norwegian flights

In English language translation, the Norwegian text shall .

APT10 Targeted Norwegian MSP and US Companies in