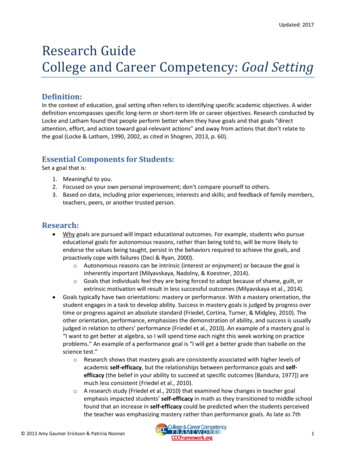 Updated: 2017Research GuideCollege and Career Competency: Goal SettingDefinition:In the context of education, goal setting often refers to identifying specific academic objectives. A widerdefinition encompasses specific long-term or short-term life or career objectives. Research conducted byLocke and Latham found that people perform better when they have goals and that goals “directattention, effort, and action toward goal-relevant actions” and away from actions that don’t relate tothe goal (Locke & Latham, 1990, 2002, as cited in Shogren, 2013, p. 60).Essential Components for Students:Set a goal that is:1. Meaningful to you.2. Focused on your own personal improvement; don’t compare yourself to others.3. Based on data, including prior experiences; interests and skills; and feedback of family members,teachers, peers, or another trusted person.Research: Why goals are pursued will impact educational outcomes. For example, students who pursueeducational goals for autonomous reasons, rather than being told to, will be more likely toendorse the values being taught, persist in the behaviors required to achieve the goals, andproactively cope with failures (Deci & Ryan, 2000).o Autonomous reasons can be intrinsic (interest or enjoyment) or because the goal isinherently important (Milyavskaya, Nadolny, & Koestner, 2014).o Goals that individuals feel they are being forced to adopt because of shame, guilt, orextrinsic motivation will result in less successful outcomes (Milyavskaya et al., 2014).Goals typically have two orientations: mastery or performance. With a mastery orientation, thestudent engages in a task to develop ability. Success in mastery goals is judged by progress overtime or progress against an absolute standard (Friedel, Cortina, Turner, & Midgley, 2010). Theother orientation, performance, emphasizes the demonstration of ability, and success is usuallyjudged in relation to others’ performance (Friedel et al., 2010). An example of a mastery goal is“I want to get better at algebra, so I will spend time each night this week working on practiceproblems.” An example of a performance goal is “I will get a better grade than Isabelle on thescience test.”o Research shows that mastery goals are consistently associated with higher levels ofacademic self-efficacy, but the relationships between performance goals and selfefficacy (the belief in your ability to succeed at specific outcomes [Bandura, 1977]) aremuch less consistent (Friedel et al., 2010).o A research study (Friedel et al., 2010) that examined how changes in teacher goalemphasis impacted students’ self-efficacy in math as they transitioned to middle schoolfound that an increase in self-efficacy could be predicted when the students perceivedthe teacher was emphasizing mastery rather than performance goals. As late as 7th 2013 Amy Gaumer Erickson & Patricia Noonan1

Updated: 2017 grade, teachers can positively impact mathematics self-efficacy beliefs (and counter lowself-efficacy beliefs from previous classroom experiences in math) by emphasizinglearning and improving understanding (mastery goals). Simply put, teachers can undoprevious negative effects.Students as young as five to six can be taught to set goals through the application of the SelfDetermined Learning Model of Instruction. While the model was originally developed foradolescents (with and without disabilities), it can be successfully adapted for early elementarygrades (Palmer & Wehmeyer, 2003) [See the Instructional Strategies section below for theinstructional process for implementing the model].The path from setting goals to accomplishing goals is complex and requires both 1) sufficientcommitment to goals during goal setting and 2) effective planning and goal-oriented behaviorsduring goal-striving (i.e., working toward the goal) (Boekaerts & Corno, 2005; Duckworth, Grant,Loew, Oettingen, & Gollwitzer, 2011). Research (Duckworth et al., 2011) conducted with 66second-year high school students at an urban school showed that self-regulatory strategies forsuccessful goal pursuit can be taught directly.o The self-regulatory strategies consist of mental contrasting and implementationintentions, which are defined below.o Mental contrasting involves imagining a desired future (e.g., graduating high school,doing well on a test) and then reflecting on the present reality and any obstacles thatmight stand in the way (Oettingen & Gollwitzer, 2010).o Implementation intentions specify when, where, and how the goal will be pursued(Oettingen & Gollwitzer, 2010). They can take the form of “if-then” plans that highlightwhat step the student will take in different situations to stay on track during goalstriving. For example, in the study by Duckworth et al. (2011), students identified twopositive outcomes of completing practice tests in a PSAT preparation workbook and twopotential obstacles to completing the tests (mental contrasting). They then wrotepotential solutions in the form of if/then statements to overcome the obstacles(implementation intentions). These students completed 60% more practice questionsthan students who did not use the mental contrasting/implementation intentions.Self-determination theory (Deci & Ryan, 1985, as cited in Dietrich & Salmela-Aro, 2013) suggeststhat supportive and structured parenting will foster autonomous (versus controlled) goalmotivation and goal pursuit. In a study of 807 Finnish adolescents, students with parents whosupported their career goals were more likely to reach those goals (Dietrich & Salmela-Aro,2013). This research reinforces the importance of including others in the goal setting process.Goals that are specific and challenging (but attainable) lead to better task performance thaneasy or vague goals (Locke & Latham, 2006).Goal setting positively affects performance and enhances achievement (Boekaerts, 2002;Edwins, 1995; Griffee & Templi, 1997; Moriarity, Pavelonis, Pellouchoud, & Wilson, 2001;Schunk, 2003, as cited in Moeller, Theiler, & Wu, 2012).“Studies have shown that appropriate goal setting, along with timely and specific feedback, canlead to higher achievement, better performance, a high level of self-efficacy, and selfregulation” (Moeller et al., 2012, p. 154).High school students learning Spanish who set goals, developed action plans to achieve theirgoals, and reflected on their attainment achieved higher language proficiency than studentswho were not proficient in goal setting (Moeller et al., 2012). 2013 Amy Gaumer Erickson & Patricia Noonan2

Updated: 2017Assessments: Goal Attainment Scaling (GAS) is a process where a target goal is identified and then more thanexpected and less than expected outcomes are defined (Kiresuk & Sherman, 1968).o A GAS is prepared for the individual student using an established goal and potentialoutcomes identified by the teacher and the student. The result is a five-point scale goingfrom most unfavorable to most favorable. The midpoint of the scale is “expectedoutcome.” Both teachers and students rate their perception of goal completion (Palmer& Wehmeyer, 2003).o An overview of GAS procedures can be found on the Massachusetts SchoolPsychologists Association uments/DDM-Goal Attainment Scaling.pdf(2014).Several assessments can provide an indication of a student’s ability to set and achieve goals. Forexample, the Arc’s self-determination scale has a section on goal setting. The Grit Scale also asksabout goal setting. Though neither of these assessments deals solely with goal setting, theyincorporate it as an important dimension.o For the Arc’s self-determination scale (Wehmeyer & Kelchner, 1995), seeo %20version%20REV2013.pdf and %20The%20Arc%27s%20Self-Determina.pdf for the associated procedural guidelines.o For the Grit Scale (Duckworth, Peterson, Matthews, & Kelly, 2007; Duckworth, 2013),see http://www.sas.upenn.edu/ .Instructional Practices: Apply the Self-Determined Learning Model of Instruction (SDLMI), which consists of threeinstructional phases. The SDLMI can be integrated into any teaching model and incorporatesmany student-directed learning strategies that directly involve students in setting and pursuinggoals linked to desired outcomes (Shogren, 2013, p. 68). Goal setting is found in phase 1 (Palmer& Wehmeyer, 2003; Wehmeyer, Palmer, Agran, Mithaug, & Martin, 2000).o See the Teacher’s Guide /uploads/2017/04/SDLMI-Teachers-Guide 4-2017.pdf (Shogren, Wehmeyer,Burke, & Palmer, 2017).o See the National Secondary Transition Technical Assistance Center’s (2012) resource onUsing the self-determined learning model of instruction to teach goal attainment(accessed via http://transitionta.org/node/133; login required)Teach students to write SMART goals: goals that are Specific, Measureable, Attainable, Relevant,and Time-bound.o Using this technique, a basic goal like “I will study for my test,” becomes “Tonight I willspend two hours studying my class notes and the textbook to prepare for tomorrow’smath test.”When assigning important long-term projects, ask students to use mental contrasting to“mentally elaborate the benefits of completing the project as well as the obstacles that may 2013 Amy Gaumer Erickson & Patricia Noonan3

The path from setting goals to accomplishing goals is complex and requires both 1) sufficient commitment to goals during goal setting and 2) effective planning and goal-oriented behaviors during goal-striving (i.e., working toward the goal) (Boekaerts & Corno, 2005; Du