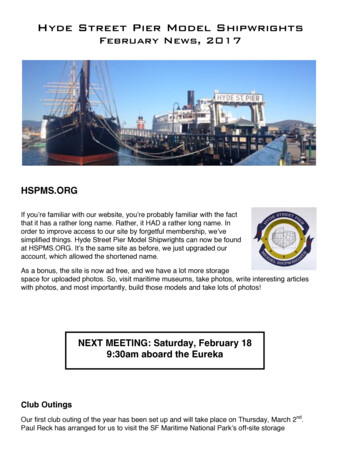 Hyde Street Pier Model ShipwrightsFebruary News, 2017HSPMS.ORGIf you’re familiar with our website, you’re probably familiar with the factthat it has a rather long name. Rather, it HAD a rather long name. Inorder to improve access to our site by forgetful membership, we’vesimplified things. Hyde Street Pier Model Shipwrights can now be foundat HSPMS.ORG. It’s the same site as before, we just upgraded ouraccount, which allowed the shortened name.As a bonus, the site is now ad free, and we have a lot more storagespace for uploaded photos. So, visit maritime museums, take photos, write interesting articleswith photos, and most importantly, build those models and take lots of photos!NEXT MEETING: Saturday, February 189:30am aboard the EurekaClub OutingsOur first club outing of the year has been set up and will take place on Thursday, March 2nd.Paul Reck has arranged for us to visit the SF Maritime National Park’s off-site storage

warehouse in San Leandro. This is a rare opportunity for members to see what is not accessibleto the general public. Paul already emailed details to club members. If you didn’t get the info andare interested in attending, make sure to contact him.Basically, we’ll be meeting up at 10am at the warehouse, which is located at 2435 Polvorosa Dr,San Leandro. We’re leaving it up to individuals to organize carpools. Looks pretty easy to get tofrom the 880 Freeway via the Davis St. or Marina Blvd exits. There is no fee for the visit. ContactPaul Reck with any questions.Some of us are thinking that it might be nice to find a place in the area for lunch afterwards. Anysuggestions?Dues are DueHave you paid your annual dues yet? Fees haven’t changed, and are still at 24/year (not 24/month as was misstated in previous newsletter issues). Remember that we don’t maintain aseparate bank account, so it’s best to bring cash to pay our treasurer, Paul Reck.Paul and Leo will be updating the club roster, so if you’re going to miss the meeting and youhaven’t paid yet. but plan to, make sure to let Paul know.January Meeting NotesThe first meeting of 2017 was held on Saturday, January 21, at 9:30 a.m. aboard the Eureka.Being the first meeting of the new year, coffee and pastries were served to the attendees.Announcements and Club BusinessTreasurer’s ReportToday was the due date for our annual club dues of 24/month. Paul Reck reported that we nowhave 825.03 in our coffers. This hasn’t gone down much, since Terry Dorman, the NPSVolunteer Coordinator, has offered to reimburse the club for small expenses.Since the meeting, Paul gave the okay to upgrade our website at a cost of 36/year.Web ReportClare Hess reported on activity on our web/blog site, http://hspms.wordpress.com and ourFacebook page at ’re presently averaging about 40 visitors a month on our website, with a total of 525 for theyear. This compares with 420 in 2015 and 81 in 2014, the year we started the site.

Group Activity IdeasWe continued our discussion on club activities and we agreed to look at visiting the Museum’soff-site storage facility in San Leandro. It was decided that a weekday was best, as we need topick a day when Park Service personnel can be there. We tentatively chose a date to follow theFebruary meeting, to make sure that everyone would get the word.The date of Thursday, March 2, was chosen, and Paul said he would contact the head of theSmall Boat Shop to confirm the date and email the membership with details.[Note: if you have not received the emails from Paul, please let him know]Show and Tell SegmentThe free coffee and pastries wasn’t enough to bring in a lot of the membership, but it wasenjoyed by those who attended!Warren Gammeter – Fishing Net HandleNot a ship model, but his fishing net handles have been an ongoing project that Warren hasbeen keeping us up-to-date on. Warren made five of these for his two sons-in-law and twograndsons.Last month, he was describing the issues he was having with cutting the grooves for the netting.So, he pointed out that with all the issues he had trying to get the grooves to look good, it all gotcovered up anyway when he installed the nets.Leo Kane – DeadeyesLeo brought in some deadeyes he purchased from Syren Ship Model Company. Thesedeadeyes come in various sizes and must be assembled from 3 laser-cut sheets. They areidentical in construction style to the paper deadeyes that are produced by the Polish papermodel manufacturer, Shipyard.

There are three parts to the sheets that must be glued-up together. The outer layers havedeadeye sections slightly larger than the middle section, and they all fit together like an Oreocookie. The parts are boxwood and can be painted, stained or dyed as necessary. They areavailable in several sizes from www.syrenshipmodelcompany.com.Paul Reck – Pryo Bomb KetchPaul took a break from wooden ship model building when he acquired this little out of productionkit by Pyro Plastics Corporation. The kit is a 1:170-scale model of an English Bomb Ketch. Pyromade a whole selection of these miniature scale plastic model kits, which sold for something like50 cents at the time. Today, these old vintage kits can be found on Ebay as collectors items.One is currently listing for 90!Paul Reck’s completed 1:170-scale Pyro Plastics Bomb KetchPaul seemed to really enjoy the detail of the kit and painting it in realistic tones. He even paintedthe Union Jack at the stern!

Not wanting to mount the plastic sails, he had to fashion new yardarms as the ones in the kitwere molded to the sails. Paul also rigged his own shrouds and ratlines instead of using the kit’spre-molded ratlines. A beautiful looking miniature model that, by his talk about how much heenjoyed it, probably won’t be his last.Paul also brought in his 1:48-scale Anchor Hoy model that he’s been scratch building again thismonth. He reviewed the application of the copper sheathing to the hull and answered questions.A Hoy There – The hull of Paul’s 1:48-scale U.S. Navy Anchor Hoy

Finally, Leo Kane brought in a pair of construction molds he borrowed from Paul to build theship’s boats for his ongoing project, the U.S. Frigate Essex. So, Paul gave us a little info on themand how they are used to build small boats.Clare Hess – Kamakura Period Sea Boat and FriendsClare Hess updated the group on the progress of his 1:50-scale, scratch built, JapaneseKamakura period sea boat. Since bringing the model to the meeting for the first time last month,he has added deck planking, the rails and rowers platforms and the framework for the long deckhouse, and basic construction of the single mast.Clare Hess’s Kamakura period sea boat now sports a mast and deck house structure.

Clare also brought in a couple recent projects, one of them, a just completed 1:72-scale papermodel of the Crowdy Head Lighthouse, which was built on the coast of Australia’s New SouthWales in 1878. The model kit is from the Polish manufacturer, Shipyard, and was purchased atAges of Sail in San Lorenzo.Shipyard’s Crowdy Head Lighthouse 1:72-scale paper model kit.The other model brought in was part of an ongoing group build by some ship modelers thatperiodically gather at the Vallejo Naval and Historical Museum. The idea was that each modelerwould build his own model and they would discuss issues in the construction and share ways toresolve them. The model is that of a Swedish gunboat of 1778, built from an Amati kit inapproximately 1:40 scale.Swedish Gunboat model from an Amati kit.

That’s all for this months meeting report and newsletter. Did I miss anything?Let me know at [email protected] meeting is Saturday, February 18th9:30 am Aboard the EurekaPlease bring your projects to share and discussVisit our blog site at http://hspms.wordpress.comVisit us on Facebook at ghts

SUCCESS WITH BIOGRAPHY STEEL: THE I- Paseo del Norte

THE CORNERSTONE TO LIFE Male Street and Black Street,