A Timeline Of Hilton History 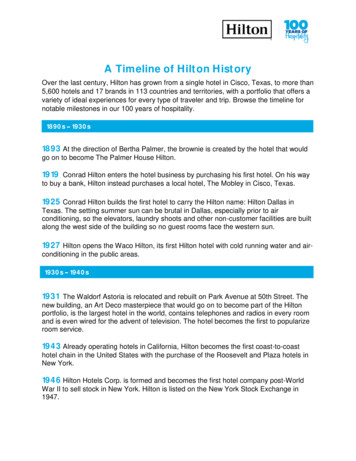 A Timeline of Hilton HistoryOver the last century, Hilton has grown from a single hotel in Cisco, Texas, to more than5,600 hotels and 17 brands in 113 countries and territories, with a portfolio that offers avariety of ideal experiences for every type of traveler and trip. Browse the timeline fornotable milestones in our 100 years of hospitality.1890s1930s1893 At the direction of Bertha Palmer, the brownie is created by the hotel that wouldgo on to become The Palmer House Hilton.1919 Conrad Hilton enters the hotel business by purchasing his first hotel. On his wayto buy a bank, Hilton instead purchases a local hotel, The Mobley in Cisco, Texas.1925 Conrad Hilton builds the first hotel to carry the Hilton name: Hilton Dallas inTexas. The setting summer sun can be brutal in Dallas, especially prior to airconditioning, so the elevators, laundry shoots and other non-customer facilities are builtalong the west side of the building so no guest rooms face the western sun.1927 Hilton opens the Waco Hilton, its first Hilton hotel with cold running water and airconditioning in the public areas.1930s1940s1931 The Waldorf Astoria is relocated and rebuilt on Park Avenue at 50th Street. Thenew building, an Art Deco masterpiece that would go on to become part of the Hiltonportfolio, is the largest hotel in the world, contains telephones and radios in every roomand is even wired for the advent of television. The hotel becomes the first to popularizeroom service.1943 Already operating hotels in California, Hilton becomes the first coast-to-coasthotel chain in the United States with the purchase of the Roosevelt and Plaza hotels inNew York.1946 Hilton Hotels Corp. is formed and becomes the first hotel company post-WorldWar II to sell stock in New York. Hilton is listed on the New York Stock Exchange in1947.

1947 The Roosevelt Hilton in New York City becomes the first hotel in the world toinstall televisions in guest rooms.1948 Hilton becomes the first hotel company to introduce a multi-hotel reservationssystem, the Inter-Hilton Hotel Reservation System. This is the beginning of the modernday reservation system.1948 Hilton Hotel Corp. merges the various credit records and cards from its separatehotels into one uniform system. The first uniform credit card that can be used at anyHilton Hotels property is mailed to the previous 175,000 plus cardholders.1949 The first Hilton outside of the continental United States opens, the Caribe Hiltonin Puerto Rico.1949 Conrad Hilton, who for many years kept a photograph of the Waldorf Astoriaunder the glass on his desk with the phrase "The Greatest of them All" written on it,purchases the hotel.1949 Conrad Hilton becomes the first hotelier to appear on the cover of TimeMagazine. He later becomes the first hotelier to make Time's cover twice when heappears in the July 19, 1963 issue.1950s1960s1950 The Stevens Hotel, now Hilton Chicago, creates its first special amenity forfemale travelers: a folder containing social note paper, a sewing kit and a booklet withnames and telephone numbers for babysitters, places to get a dress hemmed or ironedand gift shops. Many male travelers take these hotel kits home to their wives as gifts.1951 The Stevens Hotel in Chicago is renamed the Conrad Hilton by the hotel's boardof directors in honor of the hotel's visionary owner. It remains the Conrad Hilton hoteluntil 1985.1953 The first Hilton opens in Europe, The Castellana Hilton in Madrid.1954 The iconic Piña Colada is created at the Caribe Hilton in San Juan, Puerto Rico.In 1954, the hotel's bartender, Ramón “Monchito” Marrero experimented with a newrecipe that blended rum, coconut cream, and pineapple juice in an icy beverage. Afterthree months of perfecting the recipe, Marrero felt that the drink finally captured the

flavors of Puerto Rico and named it the “Piña Colada.” The new cocktail was served byMarrero for 35 years, and became the official drink of Puerto Rico in 1978.1954 Hilton purchases the Statler Hotel chain for 111 million dollars, the largest realestate deal in history at the time.1955 Hilton Istanbul, the first modern hotel built from the ground up in post-World WarII Europe, opens in June. It is a development involving Hilton, the U.S. Department ofState and the Turkish government.1955 Hilton begins a multi-million dollar program to air condition every hotel in thechain and HILCRON, Hilton's first central reservation office, opens. Reservations can bemade at any domestic or international Hilton hotel and by telephone, teletype andtelegram.1958 Barron Hilton introduces the new Hilton Carte Blanche credit card, the premiertravel and entertainment card owned by Hilton Hotels.1959 Hilton opens its first airport hotel, Hilton San Francisco Airport, pioneering theairport hotel concept. The same year, Her Majesty Queen Elizabeth II attends a dinnerin her honor at The Conrad Hilton, now Hilton Chicago, with Conrad Hilton.1959 The 1st Annual GRAMMY Awards dinner ceremony was held on May 4th, 1959at The Beverly Hilton Hotel in Beverly Hills, California. Hilton has remained the officialhotel partner of Music’s Biggest Night for more than 30 years.1961 Elvis stays at the Hawaiian Village while filming “Blue Hawaii” in 1961.1963 Hilton establishes its first department of women's services to stimulate greaterinterest amongst women traveling either in connection with a convention, orindependently for business or pleasure. These services evolve into the Lady Hiltonconcept.1964 Hilton International is spun off as a separate corporation, with Conrad Hilton asPresident. Two years later, Conrad Hilton's son Barron succeeds him as president ofthe domestic Hilton Hotels Corp.1965 Hilton begins franchising hotels in the United States, becoming the first upscalelodging company to develop the concept of franchising hotels. Lady Hilton, Hilton's firstconcept designed for women travelers is introduced, offering female-only floors orrooms and special amenities at select hotels.

2010 - Present2010 Already one of the world's largest spa providers with 123 spas in operationacross its portfolio, Hilton Hotels & Resorts introduces its first global spa concept:eforea: spa at Hilton.2010 Hilton introduces a new brand logo and name - Hilton Hotels & Resorts.Embassy Suites celebrates opening its 50,000th suite, while Homewood Suites byHilton celebrates its 300th hotel opening.2011 Hampton by Hilton becomes the first hotel brand to ever be ranked #1 inEntrepreneur Magazine's annual Franchise 500, known as the world's first, best andmost comprehensive franchise ranking. The same year, Home2 Suites by Hilton opensits first property in Fayetteville, NC.2012 Home2 Suites by Hilton and Hampton Inn & Suites break ground on first dualproperty in Huntsville, AL, catering to diverse market segments and offering enhancedamenities. DoubleTree by Hilton celebrates the brand’s 300th hotel opened and250,000,000th chocolate chip cookie served at check-in.2013 Hilton returns to the New York Stock Exchange, to trade under the same tickersymbol, HLT.2014 Hilton launches two new brands: a collection brand, Curio – A Collection byHilton, and a lifestyle brand, Canopy by Hilton. The same year, Hilton is the first hotelbrand to live stream a concert on YouTube, from Hilton Times Square.2016 Hilton launches new brand Tru by Hilton, which goes on to achieve the fastestgrowing pipeline in the history of the hospitality industry. The same year, HiltonWorldwide expands its footprint to 100 countries and territories around the world withthe opening of Hilton N'Djamena in Chad.2018 Hilton announces a strategic alliance with Playa Hotels & Resorts, with plans tonearly double our all-inclusive portfolio over the next several years, including twoadditional all-inclusive resorts by year-end.2018 The Hampton by Hilton Dubai Airport opens in September, marking the brand'sfirst property in the region and the brand's largest hotel in the world by room count at420 rooms.

A Timeline of Lesbian, Gay, Bisexual, and Transgender .

via Sysmon, WEF, and ELK Quick and Easy Forensic Timelines