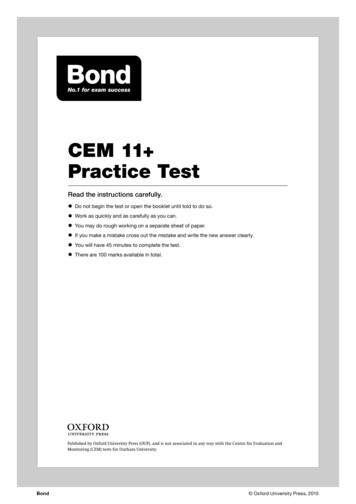 CEM 11 Practice TestRead the instructions carefully. Do not begin the test or open the booklet until told to do so. Work as quickly and as carefully as you can. You may do rough working on a separate sheet of paper. If you make a mistake cross out the mistake and write the new answer clearly. You will have 45 minutes to complete the test. There are 100 marks available in total.3Published by Oxford University Press (OUP), and is not associated in any way with the Centre for Evaluation andMonitoring (CEM) tests for Durham University.Bond Oxford University Press, 2015

Opposite WordsUnderline the one word on the right that has the most opposite meaning to the wordon the left.Example: rosethorn / flower / fell / down / up1illegalillicit / lawful / doubt / questionable / suspect12convenientsuitable / apt / untimely / early / helpful13immaturedeveloped / silly / unripe / juvenile / gentle14advanceprogress / recede / move / graduate / difficult15incapableessential / extra / qualified / dreadful / gigantic1Superfluous WordsRearrange these words to make the longest sentence you can and underline the wordthat is superfluous.Example:so cream eat the were cakes delicious(eat – The cream cakes were so delicious.)1fortnight summer holiday hour on we are going for in the a12hot weather gloves necessary mittens are cold in or13the tower traffic suspension carried over the river bridge14it is a baby moment when a magical toy is born1TotalContinue to the next page3Bond Oxford University Press, 20159

At last, another glimmer on the horizon and again I stared hard. The sun was sobright the image was fuzzy, but this looked more promising. I was right. A relativelysmall convoy of camper vans and small lorries snaked towards the village, alwayspartially hidden by the twists and turns of the road and the thick greenery of hedgesand tree foliage. Now more colourful snakes appeared, each one longer and moreexotic than the previous one. The bottom field was soon filled with cheery tents,enticing rides and the promise of excitement. This was the event that the villagerslooked forward to all year and there was a tangible buzz in the air.I hopped off the fence and walked along the lane home. I had mentally calculatedhow many vans and lorries had appeared, but it didn’t sound nearly enough. I mighthave added a few more than were truly there, but I relished the attention given byeveryone, all of them desperate to know what had arrived, how it arrived, how it alllooked, whether the music had started, whether the posters had gone up. I told agood story and everyone from grandma to the sheepdog had been whipped up intoa frenzy of anticipation. For one marvellous moment, I was the only person talkingin the room. The power and adoration was amazing as all eyes were fixed on me.For a little girl with six brothers and sisters, this attention was most welcome and itwas worth the discomfort of sitting on the fence for hours on end.The following day I woke early to blue skies and bright sunshine. I rememberpulling on my favourite dungarees, my multi-coloured striped top and a redscarf that I tied haphazardly in my hair before bolting down some breakfast andrunning down the lane to the village. As expected there were huge, gaudy posterseverywhere. “Enjoy the THRILLS of the travelling fair,” they proclaimed. My heartbeat faster as I knocked on friends’ doors. Arrangements were hastily made beforeI had to return to my chores: collecting eggs, feeding the pigs, moving the cowsfrom the byre to the field and all of the time the fair was on my mind.After an early tea my friends called and we all walked across the fields down tothe bottom field. The journey seemed to take forever and every step quickenedmy heart. The evening was wonderful with even more rides than the year before.The Satellite, Maxwell’s Waltzer, the Twist, the Dodgem Cars, the Carousel andthe potato sack Helter Skelter. We stood around the crackling, sizzling bonfire toeat hot spit-roast pork rolls oozing with sticky, sweet, apple sauce followed bycrispy, salty baked potatoes dripping in butter and cheese. Even in tin foil they wereunbearably hot and yet too delicious to complain. It was much later on before wehad room left to eat crispy battered apple slices dipped in sugar, the molten hotapple a sweet mush in our mouths. We then enjoyed handfuls of huge, pink puffs ofspun candyfloss that seemed to disappear as soon as it touched our tongues. Howcould the wooden sticks so full of candyfloss clouds disappear into nothing at all?As the late August sunlight ebbed away the music seemed louder, the brightfairground lights seemed even brighter and we began to try our hand at the sidestalls. We tossed heavy balls at the coconut shy; we tried in vain to hook duckswith a pole and threw hoops at the hoopla. There were darts to throw, pennies toroll, our futures to be read in the mystic tent until we were so tired it became hard tofocus on anything. Between us we had won two goldfish, one small, rubber bouncyball, a silver slinky stair climber and a HUGE cuddly dog. How we got up the fieldand back home with our spoils was a miracle, but we did get home and fell into bedwith the smell of smoke in our hair and the taste of salt still on our lips.Continue to the next page5Bond Oxford University Press, 2015

1What season of the year do you think the text is set in? Find three pieces ofevidence to support your answer.22What word could replace the following words as used in the text?3a Fuzzyb Gaudyc Spoils3What do you think is meant by the phrase: ‘whipped up into a frenzy’?14Give two reasons why you think that the vehicles are likened to snakes? Use thetext to support your answer.25Describe what you think the ‘side stalls’ were.26Which phrase is used in the text to mean the following:3a Ate food very quicklyb As I got closer I got more excitedc As it grew darkerTotalText continues over the page6Bond Oxford University Press, 201513

7Explain why she didn’t tell the truth about the number of vehicles that arrived atthe camp. Refer to the text to support your answer.28Draw a line to match these literary effects with the following examples that aretaken from the text.2Alliterationspiders like tiny specks of bloodA similecrackling, sizzlingA metaphorsilver slinky stairOnomatopoeiaNow more colourful snakes appearedCloze TestsUnderline one word in the brackets that is the best fit in these sentences.Example: The quacking of the (chickens, ducks, pigs) was never ending.1Before we light a fire we have to clean the old (oak, pine, ash) away from the grate.12A rockery is a (garden, pond, shop) feature with alpine plants, rocks and stones.13There are lots of (state, regional, country) cheeses in the UK.14Picture books are especially suitable for (pensioners, students, toddlers).15(Microphones, headphones, speakers) are a way of limiting music to one person.1Find the missing three letters that need to be added to these words so that thesentence makes sense. The three letters do not have to make a word.Example: The child happily played on the bouncy castle.ts.6The contestants had to bake cakes, pastries and bis7Jupiter and Saturn are planets in our s8The tw9Using a kettle is an e10It is cruel to keep an animal as a pet unless you can look after it pr1r system.1e months have between 28 and 31 days in them.1ctive method for boiling water.1rly.1TotalContinue to the next page7Bond Oxford University Press, 201514

Find the three letter word that is needed to complete each word so that each sentencemakes sense. The missing three letters must make a word and the word must be speltcorrectly.Example: The teacher was proud of her well-behaved class.1The fleet of little fishing trawlers returned to the harb2The little mermwatched the waves as she sat on her rock.glasses help to protect our eyes from sun damage.34.Father p111red the walls of the morning room so that it looked neat.1Short MathsFill in the missing numbers so that these mathematical sentences make sense.1a 57 31 135b 912 62 2a 72 8 27 b3a 72 43 b 0.62 4191 3 29 801 1.37 6.511Solve the following maths problems.4A new game costs 16.49 and I pay with a 20 note. How much change should Iexpect to receive back? 15This morning it was 4 outside and now it is 18 . How many degrees warmerhas it become? 16A triangle has one angle of 36 and another angle of 85 .What is the third angle? 17If x 26 30 and x3 22 86 what is the value of x?1Long MathsSolve the following mathematical problems.1I was born on Tuesday 28th and I was baptised 5 days later on Sunday 5th. Ifboth statements are true, what month was I born in?12At the library it takes 5 librarians 3 hours to put all of the returned books awayin the correct place. If 2 librarians are away, how long will it take the remaininglibrarians to put all of the books away?13Shop A is selling paint at 5.99 a tin. Shop B is selling paint at 7.99 a tin butthey have an offer of one tin free for every 2 tins purchased. Shop C is sellingpaint at 8.49 a tin or 29 for 5 tins.Which shop will work out the cheapest if I need to buy 6 tins of paint?1TotalText continues over the page8Bond Oxford University Press, 201514

Michael is baking 240 cakes for the school fair and Zara is decorating them. Sheices every 4th cake in pink icing. She puts silver sprinkles on every 5th cake andevery 3rd cake she adds a white chocolate star.How many cakes in total will have pink icing AND silver sprinkles AND a whitechocolate star?41DataThe following table shows the cost of stationary from the wholesalers, the cost of theitem in the shop and the profit made:NotebooksEnvelopesPensCrayonsPencilsWholesale Price 5.20 8.75 11.30 15.60 10.45Retail Price 8.99 12.99 14.50 19.99 14.25Profit 3.79 4.24 3.20 4.39 3.801What is the difference between the highest and lowest retail price? 12Which product produces the most profit? 13What is the average wholesale price? 14If I sold each item, how much profit would I make altogether? 1Distance in metresThe following chart shows Philip’s journey to the station to pick up tickets beforereturning home. He stops at the newsagent’s part way for a newspaper and ablock of chocolate. After he collects the tickets, Philip stops off at the shops forsome vegetables and bread before continuing back home.3500m3000m2500m2000m1500m1000m500m0m2:00 2:10 2:20 2:30 2:40 2:50 3:00 3:10 3:20 3:30 3:40 3:50 4:00 4:105At what time does Philip reach the newsagents?16How long does it take Philip to reach the station?17How long does Philip spend at the shops?18How far are the shops from Philip’s home?1TotalContinue to the next page9Bond Oxford University Press, 20159

CEM 11 Practice Test Read the instructions carefully. Do not begin the test or open the booklet until told to do so. Work as quickly and as carefully as you can. You may do rough working on a separate sheet of paper. If you make a mistak