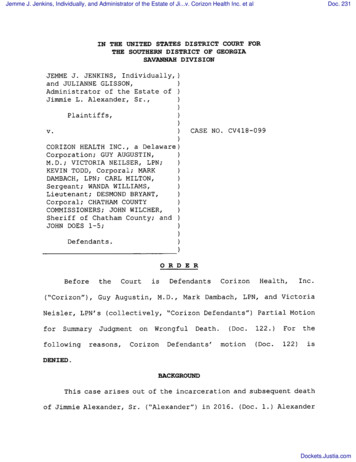 etention. Defendant Corizon Health, Inc. ("Corizon") providedmedical services to detainees at CCDC pursuant to a contract withChatham County. (Doc. 87, Attach. 1.) At all relevant times.Defendant Dr. Guy Augustin was the acting onsite medical directoremployed by Corizon. (Doc. 156 at 94.) Defendant Corizon lnurse( "LPN"), and Defendant Victoria Neisler, also an LPN. (Doc. 48 at17-18; Doc. 52 at perience pain in his right hip and leg. (Doc. 96 at 5 15; Doc.145 at 5 15.) Alexander was evaluated by Dambach and Dambach notedthat Alexander complained of sudden onset of right leg pain, thatAlexander had a weak thready pedal pulse in his right foot, andthat his blood pressure was elevated. (Doc. 96 at145at17-19.)DambachinformedDefendant17-19; Doc.AugustinofAlexander's symptoms and Alexander was prescribed medications totreatthe55 5 at 55 26-29.) However, later that evening,Alexander crawled into the middle of Unit 6D floor, vomiting onthe floorat somepoint. (Doc.96 at 55 38-39;Doc.145 at55 38-39.) Dambach responded and checked Alexander's vitals, at

5.1 mmol/L. (Doc. 11, Attach. 1 at 87.) At 4:36 a.m. on May 24,2016, after surgery, the basic metabolic panel, which includes otassiumlevel was recorded at 7.3 mmol/L. (Id. at 91.) At 4:37 a.m., thehigh lab value was reported by lab staff. (Id.) Dr. Moon, the chiefresident working that night, was informed of Alexander's potassiumlevel and he and his team went to the PACU and found Alexander incardiac arrest.(Doc.96 at If113-14;Doc.77,Attach.1at12-13.) Alexander could not be revived and was declared dead byDr. Moon on May 24, 2016 at approximately 5:13 a.m. (Doc. 96 atf 116; Doc. 90, Attach. 3 at 1.)Alexander's autopsy was performed by the Georgia Bureau ofInvestigations ("GBl") medical examiner.Dr.(Doc. 96 at f 117; Doc. 145 at f 117.) shawDowns.Downs opined thatresultofrightlowersubsequent generalizedextremityacuteonsethyperkalemia." (Doc. 90, Attach. 3 at 8.) Dr. Downs found duringreperfusion post-surgery contributed to Alexander's cardiac arrestand death.After his death, Alexander's son, Jemme Jenkins, brought suitin both his individual and representative capacity for the benefitof, and on behalf of, the Estate of Jimmie Lee Alexander, Sr. in

the State Court of Chatham County, Georgia. (Doc. 1, Attach. 1 at2-17.) After amending his complaint to add a claim under 42 U.S.C.§ 1983 for the alleged deliberate indifference to Alexander'smedical needs, the action was removed to this Court. (Doc. 1 at1-2.) Subsequently, on May 24, 2018, Plaintiff Jenkins filed asecond amended complaint adding Julianne Glisson, in her capacityas Administrator for the Estate of Jimmie Lee Alexander, Sr., asplaintiff. (Doc. int.(Doc. 26, Attach. 1.) In their third amended complaint. Plaintiffsallege the following claims: (1) a professional negligence claimagainst Corizon Defendants, (2) a negligence claim against CorizonDefendants, (3) a negligence claim against Defendants Wilcher,Todd, Milton, Williams, and Bryant, (4) a claim against the ChathamCounty Commissioners alleging that they are liable for failing tocorrect inadequate funding to the Chatham County Sheriff's orgiaConstitution against all Defendants, (6) a claim of deliberateindifference pursuant to 42 U.S.C. § 1983 against all Defendants,(7) an intentional infliction of emotional distress claim againstallDefendants,(8) aclaim forpunitivedamages against allDefendants, and (9) a claim for breach of sheriff and deputy bonds.(Id.at 11-24.) CorizonDefendantshavenowmoved forsummaryjudgment on Plaintiffs' claim of wrongful death. (Doc. 122 at 2.)

STANDARD OF epositions, answers to interrogatories, and admissions on file,together with the affidavits, if any, show that there is no genuineissue as to any material fact and that the moving party is entitledto a judgment as a matter of law." Fed. R. Civ. P. 56(c). The 'purpose of summary judgment is to pierce the pleadings and toassess the proof in order to see whether there is a genuine needfor trial.' " Matsushita Elec. Indus. Co. v. Zenith Radio Corp.,475 U.S. 574, 587, 106 S. Ct. 1348, 1356, 89 L. Ed. 2d 538 (1986)(citing Fed. R. Civ. P. 56 advisory committee notes). Summaryjudgment is appropriate when the nonmovantfails to make a showingsufficient to establish the existence of an element essential tothat party's case, and on which that party will bear the burden ofproof at trial." Celotex Corp. v. Catrett, 477 U.S. 317, 322, 106S. Ct. 2548, 2552, 91 L. Ed. 2d 265 (1986). The substantive lawgoverning the action determines whether an element is essential.DeLong Equip. Co. v. Wash. Mills Abrasive Co., 887 F.2d 1499, 1505(11th Cir. 1989).As the Supreme Court explained:[A] party seeking summary judgment always bears theinitial responsibility of informing the district tions of the pleadings, depositions, answers tointerrogatories, and admissions on file, together withthe affidavits, if any, which it believes demonstratethe absence of a genuine issue of material fact.

Celotex, 477 U.S. at 323, 106 S. Ct. at 2553. The burden hepleadings, that there is a genuine issue as to facts material tothe nonmovant's case. Clark v. Coats & Clark, Inc., 929 F.2d 604,608 {11th Cir. 1991). The Court must review the evidence and allreasonable factual inferences arising from it in the light mostfavorable to the nonmovant. Matsushita, 475 U.S. at 587-88, 106 S.Ct. at 1356. However, the nonmoving party must do more than simplyshow that there is some metaphysical doubt as to the materialfacts." I , 475 U.S. at 586, 106 S. Ct. at 1356. A mere ''scintilla"of evidence, or simply conclusory allegations, will not suffice.See, e.g., Tidwell v. Carter Prods., 135 F.3d 1422, 1425 (11thCir. 1998). Nevertheless, where a reasonable fact finder may "drawmore than one inference from the facts, and that inference createsa genuine issue of material fact, then the Court should refuse togrant summary judgment." Barfield v. Brierton, 883 F.2d 923, 93334 (11th Cir. 1989).ANALYSISIn their motion, Corizon Defendants argue that Plaintiffscannot prove that they were the cause-in-fact of Alexander's deathbecause the evidence shows that it was Memorial's failure to elythatultimately led to Alexander's death. (Doc. 122, Attach. 1 at 12.)Corizon Defendants contend that Plaintiffs' experts cannot specify

when Alexander ''passed the point of no return such that his deathwas a foregone conclusion." (Id.) In response. Plaintiffs arguethat they have produced expert witness testimony that opines thatAlexander'sinjury couldhavebeenavoidedifDefendantshadcomplied with the standard of care. (Doc. 188 at 13.) lityforthenegligent acts as a matter of law by pointing to the later acts ofMemorial. (Id. at 20-25.)The Court finds that Corizon Defendants' motion is due to bedenied.To recover in a medical malpractice case, a plaintiffmust show not only a violation of the applicable medicalstandard of care but also that the purported violationor deviation from the proper standard of care is theproximate cause of the injury sustained. In other words,a plaintiff must prove that the defendants' negligencewas both the cause in fact and the proximate cause ofhis injury.Walker v. Giles, 276 Ga. App. 632, 638, 624 S.E.2d 191, 197 (Ga.Ct. App. 2005). Under Georgia law, causation in medical malpracticecases must be established through expert testimony. Id. "Questionsregarding causation are peculiarly questions for the jury exceptin clear, plain, palpable and undisputed cases." Id., 276 Ga. zonDefendants abided by the standard of care, Alexander would not

leg. (Doc. 79, Attach. 2 at 2-4.) Dr. Blais further opines thatthe delay caused excessive tissue death which ultimately led tothe development of hyperkalemia. (Id.)Further, Plaintiffs have presented expert evidence connectingCorizon Defendants' deviations from the standard of care to thecause of Alexander's death. Plaintiffs have presented evidencethat connects the delay in medical care Alexander experienced atCCDC to hyperkalemia and Alexander's resulting cardiac entofhyperkalemia is directly related to the tissue death in an ischemiclimb.Whentissuediesdue tolackof bloodflow, themusclecreates toxins and by-products, like potassium, in the limb. Uponthe restoration of blood flow, or revascularization, the toxinsand by-products are released into the bloodstream. Dr. Blais, Dr.Lewinstein, and Dr. Downs all discuss this process. The Court willspecifically review the experts' explanations of how delay intreating an ischemic limb can contribute to high potassium.Dr. Lewinstein, Corizon Defendants' own expert, testified asfollows:Q.Okay. Now, Paragraph 4. You say, quote. Themorbidity of thrombectomy in the presence ofprolonged ischemia relates to the presence of deador necrotic muscle in the extremity, which becomesrevascularized. End quote. Did I read that right?A.Yes.Q.So when you say "prolonged ischemia," what are youreferring to?10

A.The amount of time between the onset of ischemiaQ.times zero and the time that you are doingintervention, however many hours that would be.Okay. The longer the ischemia was prolonged themore dead or necrotic tissue in the extremity youwould expect?A.Once you - yeah. Once you pass the point in timewheremusclesstarttodie,thenthemoreprolongation there is the more necrotic by-productsof the muscle there will be.(Doc. 81 at 104.) He also testified that Alexander's potassiumlevel of 5.1 and a CPK of 35,000, from Alexander's first round oflab panels, were both consistent with necrotic muscle. (Id. at106.) Additionally, Dr. Lewinstein testified in his depositionthat, if at 9:00 p.m. on May 22, Alexander had motor function andsensory function, then he could have been treated with lysisagents, which are drugs that dissolves clots. (Id. at 13; 104.)Dr. Blais states in his Rule 26 report that "[t]he delay of20.5 hours was a significant cause of the severe condition ofAlexander's right leg . . . during such an extended period of time,an ischemic lower extremity will suffer severe tissue injury."(Doc. 79, Attach. 2 at 4.) He further explains that the lack ndpotassium that can contribute to cardiac arrest, that with a totalocclusion, the time could be as short as 5-6 hours before permanentdamage occurs, and cites to peer reviewed articles that discussthe progression and severity of acute limb ischemia. (Id.) Dr.Blais attributed Alexander's cause of death, e.g. cardiac arrest11

due to hyperkalemia, to the amount of potassium that built up inAlexander's leg due to the delay in treatment. (Id. at 5.)Dr. Downs opined in his Rule 26 report that Alexander Miedas the result of right lower extremity ischemia following . . .vascular occlusion, status post emergent revascularization" whichresulted in rhabdomyolysis which in turn directly resulted in alethal elevation in potassium." (Doc. 90, Attach. 4 at 5.) yreperfusion injury. (Id. at 6.) Dr. Downs found that the delay intreatment necessitated the surgery performed by Dr. Avino, ntcontributing cause to Alexander's death. (Id. at 8-9.)Thus, Plaintiffshaveproducedexpert testimony that theprocess by which Alexander died, hyperkalemia, is directly tied tothe amount of dead tissue he had which, again, depends on thelength of time ischemia existed without treatment. The Court findsthat Plaintiffs have presented evidence creating a genuine issueof material fact on the issue of causation. See Knight v. Roberts, In his expert report. Dr. Blais attributes Alexander's death tothe delay Alexander suffered at CCDC. (Doc. 79, Attach. 2 at 5.)However, in his deposition Dr. Blais stated that his prior opinionthat '[t]he electrolyte imbalance originating in Alexander's rightleg was most likely the cause of his death," was not trulyaccurate." (Doc. 79 at 68.) He stated that it was hard to say therewas just one cause but Mhe] would be more likely to blame acombination of cardiac disease and hyperkalemia." (Id. at 69.)12

316 Ga. App. 599, 605, 730 S.E.2d 78, 84 {Ga. Ct. App. 2012);Walker, 276 Ga. App. at 642, 624 S.E.2d at fendants' argument that summary judgment is appropriate becausethe experts cannot opine on a time in which Alexander passed the point of no return." In MCG Health, Inc. v. Barton, 285 Ga. App.577, 583, 647 S.E.2d 81, 87 (Ga. Ct. App. 2007), the ionsweredeviations from the standard of care: (1) the hospital staff's actof negligently misplacing his form from the hospital's emergencycommunication center in which his hospital admission had alreadybeen approved, and (2) the triage nurse's act of classifying himas non-urgent" following her examination of him. The plaintiff'smedical expert opined that these actions were deviations from thestandard of care and that the actions delayed Plaintiff from beingseen by a physician which ultimately led to the loss of histesticle. Id., 285 Ga. App. at 583-84, 647 S.E.2d at 87. TheGeorgiaCourtofAppealsfoundthat ''[t]hefactthat[theplaintiff's] medical expert could not testify as to the exact pointin time at which [the plaintiff's] testicle became unsalvageabledoes not render his testimony mere speculation." Id. Likewise, theinabilityof anexperttospecify the exactpointinwhichAlexander would die without treatment, or at what point lack isnot

86-87,616S.E.2d808,815(Ga.Ct.App.2005)("[F]oran intervening act of a third party to become the sole proximatecause of a plaintiff's injuries, the intervening act must not havebeen foreseeable by defendant, must not have been triggered bydefendant's act, and must have been sufficient by itself to causethe injury." ).As described above, there is sufficient evidence by which ajury could find that Memorial's failure to identify and treatAlexander's hyperkalemiapost-operatively, is not a Mistinct,successive, unrelated, efficient cause of the injury." Knight, 316Ga. App. at 608, 730 S.E.2d at 86. See MCG Health, Inc., 285 Ga.App. at 585, 647 S.E.2d at 88 {affirming trial court's denial ofdefendant hospital's motion for summary judgment based on thedefense of intervening negligence); Walker, 276 Ga. App. at 644,624 S.E.2d at 201 (reversing trial court's grant of terveningnegligence).CONCLUSIONFor the foregoing reasons, Corizon Defendants' Partial Motionfor Summary Judgment on Wrongful Death (Doc. 122) is DENIED.SO ORDERED this « day of August 2020.WILLIAM T. MOORE, JR.UNITED STATESSOUTHERN15DISTRICT COURTDISTRICT OF GEORGIA

Cost of Nonconformance and ROI Calculations for Training .

In 1983, under the directorship of the late John Baldwin .

The Bible of Options Strategies