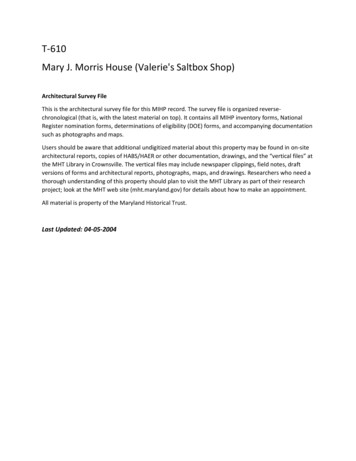 T-610Mary J. Morris House (Valerie's Saltbox Shop)Architectural Survey FileThis is the architectural survey file for this MIHP record. The survey file is organized reversechronological (that is, with the latest material on top). It contains all MIHP inventory forms, NationalRegister nomination forms, determinations of eligibility (DOE) forms, and accompanying documentationsuch as photographs and maps.Users should be aware that additional undigitized material about this property may be found in on-sitearchitectural reports, copies of HABS/HAER or other documentation, drawings, and the “vertical files” atthe MHT Library in Crownsville. The vertical files may include newspaper clippings, field notes, draftversions of forms and architectural reports, photographs, maps, and drawings. Researchers who need athorough understanding of this property should plan to visit the MHT Library as part of their researchproject; look at the MHT web site (mht.maryland.gov) for details about how to make an appointment.All material is property of the Maryland Historical Trust.Last Updated: 04-05-2004

c. 1881T-610Mary J. Morris Housest. MichaelsprivateArchitectural features suggest that the original portion of this twostory frame houses dates to the early 1880s, and the ell-shaped sectionthat faces the street was attached shortly afterwards.The chain-of-titlepoints to Mary J. Morris as the owner from 1881 to 1905, the estimatedperiod of construction.Mary Morris acquired two adjacent parcels of landin two deeds executed in 1881, and the Talbot Street frontage waspurchased from Sarah Orem, Franks.Orem, and James Seth.After 1905,the property was held by Mary's son, James T. Morris and not sold out offamily hands until 1961.On the 1877 St. Michaels town map a structureis indicated on the site.The research suggests the site was improved atthat time by an older building, probably Nicholas Orem' s storehouse whichis referred to in an 1856 deed.During the last twenty years the house has been fully converted toa commercial use with the high demand of shop space in the centralbusiness district.A documentary photograph of the house taken around1910 indicates the building was used as a residence in addition to a barbershop.porch.Filling the inside corner of the ell was a two-story turned post

7. DescriptionConditionexcellent goodfairdeterioratedruinsunexposedSurvey No.Check oneunaltered alteredCheck oneoriginal sitemoveddateT-610xof movePrepare both a summary paragraph and a general description of the resource and itsvarious elements as it exists today.The Mary J. Morris house, known recently as Valerie's Saltbox shop,is a two-story ell-shaped house that stands at 310 South Talbot street inthe central business district of st. Michaels, Talbot County, Maryland.The structure faces east with the main gable oriented on a north/southaxis.Built in stages, the southern section dates to around 1881, while thenorthern ell was attached at a slightly later date. The entire structurerests on a minimal brick foundation and is sheathed with aluminum siding.The various gable roofs are covered with asphalt shingles. Extending tothe rear is a two-story service wing.The east (main) elevation is an asymmetrical facade with a reworkedfirst floor storefront. The main entrance, now located in the northernmostbay of the ell addition, is marked by a nee-colonial style entrance with asix-panel door framed by a fluted surround.A large multi-pane displaywindow pierces the adjacent wall surface. The second and third floors ofthe projecting ell are pierced by replacement single-pane sash windows.Filling the recessed corner of the ell-shaped structure and covering theoriginal entrance to the house is a single-story shed roofed storefrontfitted with large multi-pane display windows. The second floor is lightedby three two-over-two sash windows.The south gable end is defined by two-over-two sash windows oneach floor and round arched two-over-two attic sash flank the interior endbrick stack. The eaves to the gable end are extended and finished withshort returns at the base. There is a gabled elevation on the north sideas well that is lighted by round arched two-over-two sash windows to eachside of an interior end brick stove stack.Attached ·to the back of the house is a two-story, two-bay servicewing that is extended farther by a single-story shed roofed section. Twoover-two sash windows light each floor.Although some changes have been made in converting this house toa store, some original woodwork survives undisturbed.The centrallylocated stair retains a square oak newel post and oak balusters whichsupport a molded handrail. Late nineteenth-century Victorian mantels alsosurvive on the first floor. The second floor was not seen.

8. SignificancePeriodprehistoric. -. 1400-1499- 1500-15991600-16991700-1799 1800-18991900-Survey No.Areas of Significance-Check and justify belowarcheology-prehistoriccommunity economics ific datescheck:Applicable Criteria:and/orApplicable Exception:T-610landscape architecture nmenttranspo ationother (specify)Builder/ArchitectB xALevel of Significance:ABnationalCCDDstateEFGLlocalPrepare both a summary paragraph of significance and a gert ral statement of history andsupport.1 ---The Mary J. Morris house has been converted to commercial usesince it is located within the central business district of st. Michaels.The two-story ell-shaped structure has been signilicantly altered on thefirst floor with the addition of large multi-pane display windows, a neocolonial style entrance and a shed roofed eave. Replacement sash windowsfill the second and third floors of the projecting ell. Inside a few lateVictorian features including the centrally located stair, mantels, and doorsremain in place.HISTORY AND SUPPORTArchitectural features suggest that the original portion of this twostory frame house dates to the 1880s, and the ell shaped section wasattached shortly afterwards.The chain-of-title points to Mary J. Morrisas the owner from 1881 to 1905, the estimated period of construction forthe entire building.Mary Morris acquired two adjacent parcels in twodeeds executed in 1881, and the Talbot street frontage was purchasedfit:r m Sarah Orem, Frank S. Orem and James Seth. ( 92/346) After 1905 theproperty was held by Mary's son, James T. Morris, and not sold out offamily hands until 1961. ( 371/58)On the 1877 st. Michaels town map astructure is indicated on the site. The research suggests the building wasthe storehouse of Nicholas Orem, who purchased the lot in 1856. ( 67/303)

MARY J. MORRIS HOUSET-610PAGE TWOYEAR: 1881 VOL: 92 PAGE: 346FROM: Sarah Orem, Frank S. Orem and James Seth* PRICE: 414TO: Mary J. MorrisNOTES Begins at the SE corner of a lot of Teresa Sears; run with Talbot StreetS 27'8" to heirs of Thomas Bruff, dcd.; then west with Bruff 35 feet; then north22'8 11 ; then est 42 feet; then north 32 feet to Sears; then east with Sears 17';then south 27 feet; then east 60 feet to the beginningComposed of two tracts, one conveyed to Nicholas Orem by Thomas Bruff, Sr.,(1853, 65/212).The other to Nicholas Orem by Teresa Sears 1856, 67/303.YEAR: 1881 VOL: 92 PAGE: 345FROM: A. Emmeline Bruff and T Quigley Bruff PRICE: 130TO: Mary J. MorrisNOTES Begins at SW corner of a lot about to be conveyed to Mary J. Morris bySarah W. Orem, et al. Run west 83 feet to Denny Williams; with Williams 58 feetnorth to Susan Tarr (belonging to Teresa Sears); then east 45 feet with Sears tothe line of the lot about to be conveyed to Mary J. Morris by Orem; then south22'8" to the beginning.Part of a tract which the late Thomas Bruff died siezed and possessed. TheronQ. Bruff is the heir-at-law. Emmeline and T. Quigley reserve an alley 3' widebetween this property and that of Emmeline and T. Quigley extending from TalbotStreet to the back line at the west and bounding the property here conveyed onthe south.YEAR: 1853 VOL: 65 PAGE: 212FROM: Thomas Bruff, Sr. PRICE: 125TO: Nicholas OremNOTES Begins at a "boundary stone on Talbot Street". Run with Talbot Street22'8"; then west 35 feet to a lot of Thomas Bruff, Sr.; then north 22'8"; then35 feet to the beginning.Thomas Bruff, Sr. (1772-1857) was the oldest of six children of John Bruff, thejoiner-wheelwright. He inherited the land along Talbot and Grace Streetspurchased by John.This lot probably contained Nicholas Orem's storehouse mentioned in deed 1856,67/303 which follows.

MARY J. MORRIS HOUSET-610PAGE THREEYEAR:VOL:PAGE:FROM: James Braddock and John Thompson PRICE:TO: John BruffNOTES Between 1781 and 1790, John Bruff wheelwright and joiner, bought threeparcels from James Braddock and John Thompson totaling 145 feet on the "mainroad or Market Street". These have not been definitely located, but the distanceon Talbot Street can adequately cover lots from Grace Street to the Searsproperty. The Town Survey of 1804 notes that the property lines in this areacannot be shown because of problems with the configuration of the lots.Thename "Bruff" can be made out in pencil on the original plat of the town in thissection. The following deeds are the purchases made by John Bruff on the MainRoad:1781, 21/223 James Braddock to John Bruff pl80 sp 60' x 60'1790, 24/52 John Thompson to John Bruff pl5 cm 50' x 60'(on road)and another 60'x 25'(on road)The deeds give the original tracts as "Chance" and/or "Jane's Progress".Note: John Bruff also bought a lot 297' x 280' about 90 feet back from themain road behind the road frontage lots. (From John Thompson, 1791, 24/276)

RR-148 Frankenstein by Lowell Liebermann with the San .