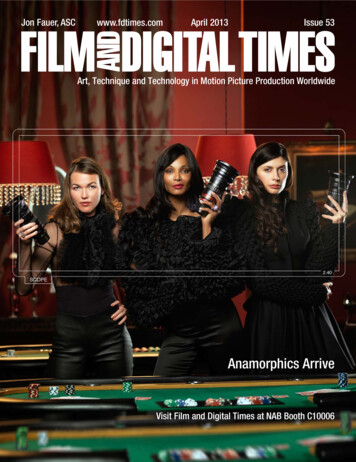 IntroductionLooking Through a LensLet the games begin with another FDTimes NAB edition. Articlesare arranged partly by theme but mostly in order of diligently metor missed deadlines.Caution: this article may raise a few eyebrows. Do not attempt:the picture above is the element of a very expensive lens droppedaccidentally. Curiously, continued shooting with the damagedlens resulted in images that weren’t unusable.NAB 2013 buzz will be anamorphic lenses, more K and 4K, waysto shape the image with new lenses, filters and effects. Ways toconnect cameras, recorders, rigs and accessories, ways to movecameras, to illuminate, and ways to stand out.Standing out was what the AFC Micro Salon was all about lastmonth. This annual expo and gathering of the Association ofFrench Cinematographers in the former Pathé Film Studios inMontmartre is a favorite show. Imagine Cine Gear with fine wineand finer food. Rental house owners and technicians were peeringintently into lenses with high powered Maglites and magnifyingglasses. Scrutinizing lenses on projectors. Counting lines, looking for distortion, searching for color aberrations. Looking “into”lenses or looking “through” lenses? All fine but why?While some at Micro Salon were looking into places offering thebest production incentives, cinematographers were engaged in passionate discussions on how best to customize the digital image, using vintage lenses, trying any deliberate or desperate measure togive their work a unique character in the face of digital cameraswhose sensors they felt were all similar. It’s not just France. We hearit worldwide: apprehension that digital cinematography sometimesseems like shooting with one film stock and using the same lab.Some have said that film was unique as a capture medium becauseof its random permutations of many different film emulsions, exposed with a panoply of different cameras, lenses, and filters, processed by many different labs, using different chemicals and evendifferent water, timed and printed in various ways. The concernlately has been with homogenized digital sensors, inside the samecameras, auguring a perceived reduction in creative possibilitiesthat a cinematographer might have.Cinematographers always had love-hate relationships with cameras. A camera was never built that didn’t suffer drilling, grindingand the ministrations of retrofit syndrome to make it unique. Butnot everyone has a Philippe Ros, Olivier Garcia, Nicolas Pollacchi,Hervé Theys or a company like HD Systems ready to redesign custom gamma curves for their digital cameras. So, it’s back to whatcinematographers always knew: lighting and lenses.Carey Duffy continues the theme with his “Chamber of Secrets”filters tutorial. The adjacent piece “Looking Through a Lens” is anopening salvo in this discussion.For years, I thought that dust, digs and little scratches inside anew lens or on the front element were the equivalent of a sloppysurgeon leaving a sponge inside the patient. How often did I torment lens manufacturers by asking for a dozen new lenses to bepresented, each of which I would painstakingly inspect and reject until I found the most pristine of the pristine. Ironically, allthis persnickety prep went out the window after the first day onlocation (EXT. SANDY, SALTY WINDSWEPT BEACH - DAY).Lenses are not hermetically sealed. Dust, dirt, smoke, and sootfind their way inside lenses the moment they leave the factory.Scratches on lens elements may cause a tiny part of the image to bea little less sharp. In most cases, we won’t notice the difference unless it occurs along an edge that’s supposed to be razor sharp, liketext or a straight line, or part of a flare. For faces, fashion and beauty, there could be a benefit—although using a filter to soften theimage is a much less costly and eminently more reversible methodthan attacking your 25,000 Summilux-C with sandpaper. At widerapertures, much less of the scene is in focus, so a scratch is morelikely to blend in with everything else. When you stop down to T16,you may notice the effects of a scratch because everything is muchsharper by comparison. In other words, scratches are less apparent at wider apertures. Nevertheless, camera rental houses will holdyou responsible if you scratch a front lens element. You’ll have topay for the replacement cost, just as Hertz and Avis will hold youresponsible for a dented bumper.It turns out that scratches, digs, sleeks, and other tiny marks fromthe polishing and manufacturing process, as well as scratches encountered in the real world, are not the end of the world.In his paper for the 2010 International Optical Design Conferencein Jackson Hole, WY, Cody B. Kreischer wrote that surface qualityspecification with most optical components is for cosmetic purposesonly. Cody is President of Kreischer Optics Ltd (www.kreischer.com).He explains, “It would take 26 optical elements with 2 pits of 0.5 mmdiameter and one scratch 0.008 mm wide by 10.0 mm long to producea 1% drop in contrast at the image plane. Although this is a simplifiedexample, for the majority of optical systems, surface quality has negligible effect on optical performance.” (The Adversarial Relationshipbetween Optical Performance and Scratch-Dig; opticsinfobase.org)Issue 53 Apr 20135

Tiffen and the Chamber of Secretsapart from those in the know. I am, of course, referring to theuse of camera filters. It seems that these highly sensitive opticaltools are rarely discussed in major cinematographic publicationsapart from broad, sweeping references. I hope to enlighten with adiscussion about the different technical and aesthetic advantagesthey provide. Their diverse use and intricate ways can help resolvethe anxiety of today: that my camera looks so very much like yourcamera, but I want to find a way to make my images look differentfrom yours.By Carey DuffyAs digital technology attempts to replace origination on film, longthe bastion of many cinematographers, a collective anxiety questions whether new image capture paradigms have led to a reduction of creative possibilities. This has fundamentally challengedthe cinematographer’s ability to work, poetically speaking, “in thedark.” What remains to enable a cinematographer to stand out?With the proliferation of on-set monitors and LUTs, the abilityto craft moving images without interruption from the video village is a thing of the past for many. Only too often do we hear thephrase “shoot it clean and fix it in post,” challenging the cinematographer’s pursuit to fulfill the creative brief.But, as this new digital broom sweeps film away, it introduces newand wonderful tools whose potential seem endless. With so muchto learn about these new technologies and workflows, the moderncinematographer (whether schooled in film or fresh to the industry)embarks on a new quest. However, the one remaining factor that hasbeen ever-present in this transition is the primary objective to process focused light on reaching a recording format. How the imageis crafted onto that format is now one of the hottest topics of debateabout what being a cinematographer is in this new digital age.For many the concept of “burning in the image” at the point oforigination has been a long-held doctrine. This is where the visualinterpretation of imagery begins its journey. The tools used arethe cinematographer’s primary instruments of control over thequality and character of light encountered on a production.Lens choice is the primary tool to advance the visual storytellingprocess, determining angle of view, point of view, focus, sharpness or softness, and “speed of light.” The cinematographer’s secondary tool kit is one that still often remains a guarded secret, anarsenal of “dark arts.” To the uninitiated, a clean image is all that isrequired for digital acquisition. The world of Post image manipulation is open to all who can turn on a computer.We do not forget that Post Production and effects work for cinematographers has always been an inherent part of the job. So,what is this guarded secret of dark arts that I refer to as a secondary tool kit? I am talking about all the other pieces of glassthat illuminate, craft and conjure up images and feelings thatenter our consciousness without ever being openly discussedCamera filters have been used since the beginning of photography. It is easy to simply split filters into two major categories:chromatic and non-chromatic (or think of it as color and effect,or filters you need and filters you like). This helps classify filtersbut it does not tell the full story. Filters are used to solve technicalproblems or add aesthetic mood and sensations. Nevertheless, anaesthetic effect can be achieved by using a technical filter and atechnical effect can be achieved by using an aesthetic filter. Useis open to an individual’s interpretation. The laws of physics govern capturing of moving images regardless of acquisition format,however these laws may also be tested and broken.False color or pollution - where it starts or endsOne of the biggest changes with the move to digital is the advantage of higher ISOs. This, in turn, has created a challenge forstandard neutral density transmission reduction filters (NDs).NDs are considered to be a vital tool for cinematography. Butthe problem with standard NDs is that they do not cut the wavelengths that adversely affect the sensor’s color reproduction. Inshort, they allow pollutant wavelengths and false color (Far Red680 nm to 700 nm, Near I. R. 700 nm to 750 nm, and sometimesFar I. R. 750 nm and beyond) onto the sensor. This new problemmeans that filter manufacturers have had to rethink NDs. Theiranswer has been to produce a new type of Neutral Density filter,the “IRND” to replace standard NDs for digital cameras. Everycamera model has a different sensor and algorithm designed toproduce their own color space. The goal of producing a specificanswer to reduce neutral light transmission across individual sensors reading and cutting wavelengths at different nanometers iscurrently not available. That’s why a one-size fits all answer hasbeen formulated by the filter manufacturers. Each different camera model also uses a different internal IR blocking filter and adifferent Optical Low Pass Filter. To complicate things more,Neutral Density translucent dyes used in the manufacture of filters from all manufacturers vary from batch to batch. Only noware camera manufacturers introducing internal IRND filters, buteven then they do not cover all stop eventualities.It is easy to understand why this issue causes so much confusion.One constant phenomenon is that digital sensors need to readlight into the Far Red end of the spectrum to produce great looking skin tones. And this is where pollution starts.There are other ways to cut polluting wavelengths with filters.These are specifically-designed band cut filters using coatings tocut at a given wavelength. The issue with these types of filters isthat they do not cover all focal lengths. The coatings used introduce chromatic vignetting on wider focal lengths.Filters that reduce Far Red and Near IR pollution on digital cameras need to start working within the visible spectrum. For someIssue 53 Apr 20137

Tiffen and the Chamber of Secrets, cont’dcameras, this issue appears under normal lighting conditionssuch as Daylight or Tungsten, even without the use of an NDfilter. Understanding your camera sensor’s response in variouslighting environments has never been so important.Therefore, reducing visible l

REVENUE FROM CONTRACTS WITH CUSTOMERS ASC 606,

A Practical Guide to ASC 718 - shoobx

Getting Merger and Acquisition Accounting Right