Hazards And Communities Affected By Those Hazards Name Of . 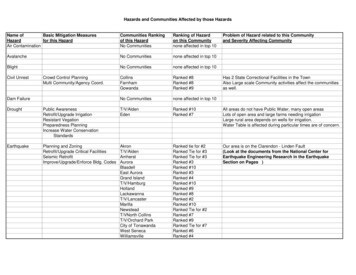 ndaHazards and Communities Affected by those Hazards

IntroductionPurposeThis Hazardous Materials Response Annex for Erie County has been prepared to meetstatutory planning requirements of the federal Superfund Amendments andReauthorization Act of 1986, SARA, Title III, and to provide for a higher degree ofpreparedness to deal with incidents involving extremely hazardous substances.The plan has been specifically designed to serve as an Annex to the CountyComprehensive Emergency Management Plan (CEMP) and supplements that document.Every effort has been made to integrate the Hazardous Materials Annex with the CEMP. Inthat regard the Plan is consistent with existing authorities, planning assumptions, systemsand procedures. The Erie County Department of Emergency Services, which as theSecretariat to the Erie County LEPC, maintains a computerized list of 302(c) facilities inErie County.This plan is based upon the New York State Hazardous Materials Response PlanningGuide for Counties and The Hazardous Materials Emergency Planning Guide (NRT-1)which was developed by the National Response Team.Objectives1. Set forth a course of action that will minimize hazards to life and property and adverseimpacts upon the environment from the release of a hazardous material.2. Establish procedures to provide for a coordinated effort on the part of the County, itscommunities, and industry in response to a hazardous materials emergency.3. Identify emergency response organizations, equipment and other resources, which canbe employed during such a response.4. Provide a mechanism to integrate community and facility response procedures into theCounty Emergency management Plan.Organization1.Section A through I represent local and County response procedures by function /applicable to any hazardous materials emergency.Appendices and attachments are identified in the Table of Contents.Revised 02/05/2010page 3 of 37

A. Notification and Alerting1. Purpose:To provide for the initial notification to the local fire department and the Erie CountyDepartment of Emergency Services of a hazardous material emergency and thesubsequent alerting of other response personnel.2. Situation:Timely, informative and accurate notification of a hazardous material emergencyis critical of an effective emergency response operation. Section 304 of SARATitle III requires the immediate notification of the Community EmergencyCoordinator (in Erie County, the Commissioner of Emergency Services) and theState (DEC) when a release of an extremely hazardous substance (EHS) or ahazardous chemical that requires notification under Section 103(a) of CERCLAoccurs. Specific information is required by the notification such as chemicalname, method of release, health effects, medical attention and protectiveactions.Although Title III does not require the emergency notification of the local firedepartment, the State Emergency Response Commission (SERC) believes sucha notification is critical. The SERC has provided a Title III Release Report Formthat provides for notification to the local fire department. Erie County endorsesthis form and has made it a part of its notification procedure.In addition to statutorily required notifications, this procedure is applicable to allhazardous materials emergency notifications.This procedure details the notification information required from the emergencysite to the local fire department and Erie County Department of EmergencyServices and the subsequent alerting of local and county and state responsepersonnel.This procedure reflects the belief that both local and County response personnelmust be immediately notified of a release. In Erie County, the Commissioner ofEmergency services has been designated as the Community EmergencyCoordinator, pursuant to Section 303(c) (3) of Public Law 99-499.3. Participating Agencies:a. Local Fire Departmentsb. Department of Emergency Servicesc. Medical Emergency Radio System (MERS)d. N.Y. State Department of Environmental Conservation (DEC)e. Federal National Response Centerf. Local Police, County Sheriff or State Policeg. Emergency CoordinatorsRevised 02/05/2010page 4 of 37

The DES will alert and inform the local fire department even if the notificationinformation indicates that this alert has already taken place.This procedure serves as the back-up to make sure that the local firedepartment has been notified of the emergency and is responding.d. When MERS receives an initial County notification, they will immediatelyalert and inform the Commissioner of Emergency Services of the emergencynotification information.e. The DES will then notify the following agencies:All Hazardous Materials Releases:N.Y. State DECAll Major Incidents:N.Y. SEMO Warning PointNational Response CenterReleases That May Impinge on Bodies of Water:U.S. Coast GuardReleases That May Impinge upon the Canadi

Information for Students Affected by the Closure of

Healthy Communities of Opportunity: An Equity Blueprint to .

Hazard Assessment and Control: a handbook for Alberta .