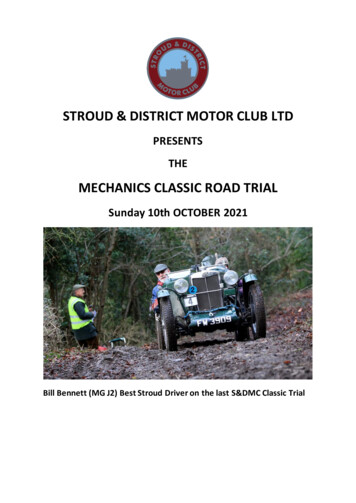 THE MECHANIC TRIALFollowing an extended and unwelcome hibernation Stroud & District Motor Club aredelighted to invite you to join us on the 10th October 2021 for THE MECHANICS TRIAL 2021THE MECHANICS TRIAL originates from the late 1970’s when the clubs Headquarters werelocated at the Mechanics Arms PH in Chalford. The Landlord and landlady, Jim & Liz Polly,presented the Mechanics Trophy to the Club giving us an opportunity to run an event in thepub’s name.The first Mechanics Trial ran in 1979 and was organized by Nigel Moss, Eric and Diana Wall,The single venue Classic Trial was held within a few miles of the pub in Badgers Wood,Cowcombe, Chalford. The event continued to run at various single venues includingCatswood and at Sallywood Farm from 1984 to 2001.In 2002 the event ventured out onto the road with Gill and Edwin Hayward doing a greatdeal of work to create a brand new road trial for the club. Various organizing teams havesince kept the event on the road.This year’s event is organised by a similar team to last year with, it will feature old favouritehills such as Wood Lane and Viaduct and will follow a similar format to recent successfulyears. The trial will include a couple of old sections used on the Cotswold Clouds in the early80’s, Hobbs Choice, a gentle rocky climb and a tricky old favourite Bulls Cross.The event offers what we hope is a good day’s motorsport visiting some different parts ofthe Cotswold’s to our Cotswold Clouds Trial in February. The organising team make everyeffort to give all competitors a chance to climb some sections during the day but alsomaking some a great challenge.The Mechanics Trial will run on a Clubman’s permit which means you do not need acompetition licence.IF YOU ARE NOT COMPETING ON THE EVENT PLEASE CONSIDER MARSHALING.CONTACT ANY OF THE ORGAINISING TEAM TO OFFER YOUR SERVICES ON;STEVE LOUKSMARK HOBBSDEL LLOYDJAMES MARTINRICHARD HAYWARDCLERK OF THE COURSEASSIST. CLERK OF THE COURSEASSIST. CLERK OF THE COURSECHIEF MARSHALLSECRETARY OF THE MEETING07974 23594207989 27767207836 31736407881 86604007505 701197

MECHANICS CLASSIC TRIAL – SUNDAY 10th OCTOBER 2021SUPPLIMENTARY REGULATIONS1. The Stroud and District Motor Club will promote a Clubman’s permit Classic Trial on Sunday 10thOctober 2020. The Meeting will be governed by the General Regulations of the Motorsports UK.Incorporating the provisions of the International Sporting Code of the FISA, these supplementaryregulations and any written instructions that the organizing club may issue for the event.2. MSA permit No. 122586DOT authorization. 28521OC103. The event is open to all fully elected members of the Stroud & District Motor Club Ltd. The event isalso open to fully elected members of :- Camel Vale MC, Torbay MC, Falcon MC. Holswothy MC,Minehead MC, Midlands Automobile Club, Ross & District MC, Woolbridge MC, VSCC, Bristol MC,Fellside Auto Club, IIIkey & District MC, The Motor Cycling Club, Windwhistle MC and New for 2018 theDellow register, Bukler register and the Pre-War Austin Seven Club4. All competitors must produce a current MOT certificate where applicable. All car drivers andpassengers must hold a valid Club Membership Card and a Motorsport UK RS Clubman’s Licence (as aminimum). Passengers under 16 years of age will not be deemed competitors for the purpose of licensesand Club membership and will not be required to sign on. All entries and declarations will be online andmust be submitted before the end of Wednesday 5th May. Any competitor or passenger under the ageof 18 will be required to produce a letter of consent from a parent or guardian before the event, whichwill be retained. Any passengers who occupy the rear seats of saloon cars must be not less than 2 yearsof age. H. Chart 7/T.4.1.5/T.4.1.6. Any child under 12 years of age or 135cm in height must be seatedusing an approved “Child Restraint”. No passengers under the age of 14 shall be carried in an open carT.4.1.8.5. The program of the event will be:Start : The start will be from SKF, Stonehouse, Nr. Stroud. Gloucestershire (MR 162/795054). A validMOT (where applicable) will be need to be shown for the car entered. Competitors and passengers mustsign on at the start at least 30 minutes before their starting time. Your start time will be advised in thefinal instructions. The first competitor will leave at 09:00 hrs. the rest at one minute intervals innumerical order, although gaps may be left between groups of competitors. No time schedule willoperate during the event.Finish: The finish will be at the Minchinhampton Gold Club – Old Course Club house, MinchinhamptonCommon where the competitors will be required to sign off and collect their finisher’s certificates.Competitor’s numbers must be handed in.6. The Trial will cover a course of approximately 60 miles and will include up to 18 observed sections andspecial tests on public roads and private land. A route card will be issued at the start. Competito rs failingto follow the authorised route will be excluded. Route check will be operated during the event.7. The event will consist of the eight standard classes as stated in the Motorsports UK rule T10 (butmodified by the ACTC) as follows:Class1Front engine front wheel drive production car. These cars can be fitted with Torquebiasing/Limited Slip Differentials for a trail period until December 2021