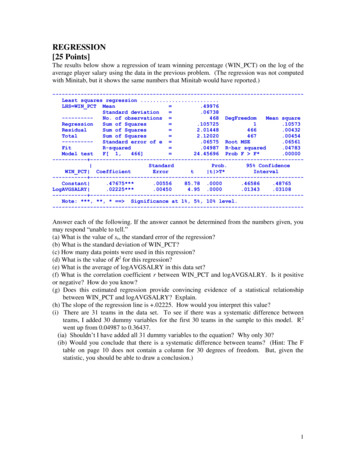 Part IX. Multiple Regression Modeling[50 points]The regressions on the next page show a study of box office revenues for a sample of movies in2008/2009. The variables in the model are as follows: The dependent variable is the log of box office revenues The predictors are:Log of production budgetIndex of ‘star power’Dummy variable for whether the movie is a sequelMPAA rating, G 1, PG 2, PG13 3, R 4Dummy variables for 4 kinds of movies (the left out category isevery other kind of movie other than these 4)CantWait3 is Fandango’s index of how much fans ‘can’t wait’LogAddct is Trailer Addict.com’s index of fans ‘can’t wait’LogFndGo is another internet buzz variable from FandangoLogCmSon is a buzz variable from RottenTomatos.coma. Based on the first regression, which variables are statistically significant in explainingLogBox?b. Form a confidence interval for the true coefficient on CNTWAIT3 using the first regression.c. Do the four internet buzz variables in the first regression provide a significant additional fit inthe model compared to the second regression? How can you determine this?d. Interpret the coefficient on SEQUEL in the first regression model.e. Is it possible to determine the regression sum of squares in the second regression? How?f. How many observations were used to compute the regressions?g. Do you think the third regression provides a “significant” explanation of LogBox? Explain.h. What does the reported value p 0.2122 reported with LogBudget in the first equation mean?i. Explain the meaning of the F statistic and the associated p value reported with the firstmodel.6

REGRESSION [25 Points] The results below show a regression of team winning percentage (WIN_PCT) on the log of the average player salary using the data in the previous problem. (The regression was not computed with Minitab, but it shows the same numbers that Minitab would have reporte

Maximise Your Investment In SPSS

STA 6093 Introduction to Applied Statistics for . - University of Florida