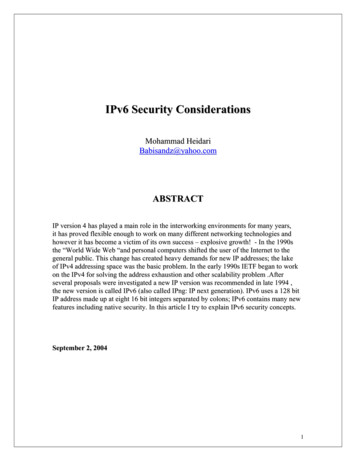 IPv6 Security ConsiderationsMohammad [email protected] version 4 has played a main role in the interworking environments for many years,it has proved flexible enough to work on many different networking technologies andhowever it has become a victim of its own success – explosive growth! - In the 1990sthe “World Wide Web “and personal computers shifted the user of the Internet to thegeneral public. This change has created heavy demands for new IP addresses; the lakeof IPv4 addressing space was the basic problem. In the early 1990s IETF began to workon the IPv4 for solving the address exhaustion and other scalability problem .Afterseveral proposals were investigated a new IP version was recommended in late 1994 ,the new version is called IPv6 (also called IPng: IP next generation). IPv6 uses a 128 bitIP address made up at eight 16 bit integers separated by colons; IPv6 contains many newfeatures including native security. In this article I try to explain IPv6 security concepts.September 2, 20041

Introduction to IP next generationIPv6 retains many of the design features that have made IPv4 so successful. Some of thechanges from IPv4 to IPv6 include:1- Address size: The length of address field is extended from 32 bits to 128 bits; theaddress structure also provides more level of hierarchy. With the increased IP addresssize, the address space can support to 3.4 * 10 38 hosts.2- Simplified header format: the IPv6 datagram header is completely different thanthe IPv4 header, some of the header fields in IPv4 such as check sum, IHL,identification flag and fragment offset do not appear in the IPv6 header.3- Extension header: IPv6 encodes information into separate headers, this features iscalled flexible support for option.4- Flow label capability: IPv6 adds a “flow label “to identify a certain packet flowThat requires a certain quality of service.5- Fragmentation at source only: Routers do not perform packet fragmentation if apacket needs to be fragmented, the source should check the minimum MTU alongthe path and perform the necessary fragmentation.6- Support for audio and video: IPv6 includes a mechanism that allows a sender andreceiver to establish a high quality path through the underlying network and toassociate Datagrams with the path. Although the mechanism is intended for usewith audio and video applications that require high performance guarantees, themechanism can also be used to associate Datagrams with low-cost paths.7- No checksum field: the checksum field has been removed to reduce the packetprocessing time in a router, Packets carried by the physical network are typicallyalready checked, furthermore, high-layer protocol such as TCP and UDP alsoperform their own verification, thus the removal of the checksum field is unlikelyto introduce a serious problem in most situations.8- Large packets: IPv6 supports payloads that are longer than 64 Kbytes.9- Extensible protocol: Unlike IPv4, IPv6 does not specify all possible protocol features,instead the designers have provided a scheme that allows a sender to add additionalinformation to a datagram .the extension scheme make IPv6 more flexible than IPv4 ,and means that new features can be added to the design as needed.10- Security: IPv6 supports built-in authentication and confidentiality.2

How is IP Security transmitted?IP Security adds a new header in the IP datagram between the original header and thepayload .In ESP, data are encrypted and a new datagram trailer is added.IP DatagramIP Security Datagram4

IP security has four main functionalities:1234-Security Associations ( SA )Authentication only ( Authentication Header or AH )Encryption and authentication known as Encapsulating Security Payload ( ESP )Key management1- Security Association (SA)A key concept that appears in both the authentication and confidentiality mechanisms forIP is the SA. An association is a one-way relationship between a sender and a receiverthat affords security services to the traffic carried on it. If a peer relation is needed fortwo way secure exchange, then two security associations are required .Security servicesare afforded to an SA for the use of AH or ESP, but not both. A security association isuniquely identified by three parameters:1- Security Parameter Index (SPI): Bit string assigned to the SA with local meaning, it isTransmitted in the AH and ESP headers to enable the receiving system to select the SAunder which a received packet will be processed.2- IP Destination Address: it supports only Unicast (The address corresponds to a singlecomputer) addresses3- Security Protocol Identifier: This indicates whether the association is an AH or ESPsecurity associationHence, in any IP packet (IPv4 datagram or an IPv6 packet) the security association isuniquely identified by the destination address in the IPv4 or IPv6 header and the SPI inthe enclosed extension header (AH or ESP). A Security Association is normally definedby the following Parameters:1- Sequence Number Counter: A 32-bit value used to generate the sequence number fieldin AH or ESP headers2- Sequence Counter Overflow: A flag indicating whether of the Sequence NumberCounter should generate an auditable event and prevent further transmission of packetson this SA3- Anti Reply Window: Used to determine whether an inbound AH/ESP packet is a reply4- AH Information: Authentication algorithm, keys, key lifetimes, and related parametersbeing used with AH.5

But what is “Authentication Data “?What is Reply Attack and How does AH prevent it?A reply attack is one in which an attacker obtains a copy of an authenticated packet andlater transmits it to the intended destination. The receipt of duplicate, Authenticated IPpackets may disrupt service in some way or may have some other undesiredconsequence. The sequence number field is designed to thwart such attacks .When a newSA is established, the sender initializes a sequence number counter to 0. Each time that apacket is sent on this SA, the sender increments the counter and places the value in thesequence number field. Thus, the first value to be used is 1.If anti-reply is the enabledsender must not allow the sequence number to cycle past 2 32 – 1 back to zero.Otherwise, there would be multiple valid packets with the same sequence number. If thelimit of 2 32 – 1 is reached, the sender should terminate this SA and negotiate a new SAwith a new key. Because IP is a connectionless, unreliable service, the protocol does notguarantee that packets will be delivered in order and does not guarantee that all packetswill be delivered. Therefore, the IP security authentication document dictates that thereceiver should implement a window of size W, with a default of W 64.The right edge ofthe window represents the highest sequence number in the range from N-W 1 to N thathas been correctly received .8

Limitations:The AH and ESP do not provide security against traffic analysis, It is not economical toprovide protection against traffic analysis at the IP layer. One approach in the protectionagainst the traffic analysis is the use of bulk link encryption, another technique is sendingfalse traffic in order to increase the noise in the data listened by the traffic analyst .AH orESP do not provide non-repudiation when used with the default algorithms . Use ofcertain algorithm for example RSA with appropriate transformation provides nonRepudiation. Non-Repudiation should be concerned with the application layer security.4- Key managementThe key management portion of IP Security involves the determination and distributionof secret keys. The IP Security architecture document mandates support for two types ofkey management:1- Manual: A system administrator manually configures each system with its ownkeys and the rest of system’s keys; this is practical for small and staticenvironments.2- Automated: An automated system enables the on-demand creation of keys forSecurity Associations and facilities, the use of keys in a large distributed systemwith an evolving configuration.10

The default automated key management protocol for IPSEC is referred to asISAKMP/Oakley and consists of the following elements:1- Oakley Key Determination: Oakley is a key exchange protocol based on theDiffie-Hellman algorithm but providing added security. Oakley is generic in thatit does not dictate specific formats.2- Internet Security Association and Key Management Protocol (ISAKMP):ISAKMP provides a framework for Internet Key management and provides thespecific protocol support, including formats, for negotiation of security attributes.1- Oakley Key Determination ProtocolOakley is a refinement of the Diffie-Hellman key exchange algorithm. Diffie-Hellmaninvolves the following interaction between users A and B:- q is a large primus number- Į is a primitive root of q- A selects a random integer X(A) ( Secret Key ) and transmits to B : Y(A) Į.X(A)- B selects a random integer X(B) ( Secret Key ) and transmits to A : Y(B) Į.X(B)- each side can now compute the secret session key :K Y(B) X(A) mod q Y(A) X(B) mod qThe Diffie-Hellman algorithm has two attraction features:1- Secret keys are created only when needed, there is no need to store secret key for along period of time, exposing them to increased vulnerability2- The exchange requires no preexisting infrastructure other than an agreement on theglobal parameters.However there are a number of weaknesses to Diffie-Hellman as painted out in[HUTT98]:1- It does not provide any information about the identities of the parties2- It is computationally intensive. As a result, it is vulnerable to a clogging attack inwhich an opponent requests a high number of keys. The victims spends considerablecomputing resources doing useless modular exponentiation rather than real work3- It is subject to man-in-the-middle attack , in which a third party C impersonates Bwhile communicating with A and impersonates A while communicating with B. Both Aand B end up negotiating a key with C, which can then listen to and pass on traffic11

The receipt of duplicate, Authenticated IP packets may disrupt service in some way or may have some other undesired . keys and the rest of system’s keys; this is practical for small and static . - q is a large

Deploying IPv6 at Scale As an ISP - NANOG Archive