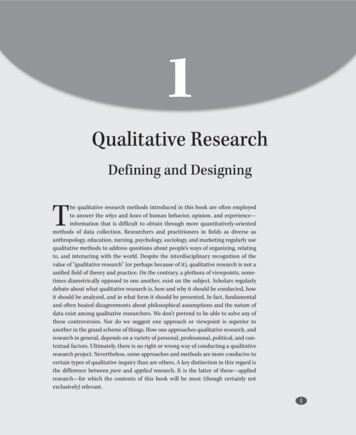 18Qualitative ResearchDefining and DesigningThe qualitative research methods introduced in this book are often employedto answer the whys and hows of human behavior, opinion, and experience—information that is difficult to obtain through more quantitatively-orientedmethods of data collection. Researchers and practitioners in fields as diverse asanthropology, education, nursing, psychology, sociology, and marketing regularly usequalitative methods to address questions about people’s ways of organizing, relatingto, and interacting with the world. Despite the interdisciplinary recognition of thevalue of “qualitative research” (or perhaps because of it), qualitative research is not aunified field of theory and practice. On the contrary, a plethora of viewpoints, sometimes diametrically opposed to one another, exist on the subject. Scholars regularlydebate about what qualitative research is, how and why it should be conducted, howit should be analyzed, and in what form it should be presented. In fact, fundamentaland often heated disagreements about philosophical assumptions and the nature ofdata exist among qualitative researchers. We don’t pretend to be able to solve any ofthese controversies. Nor do we suggest one approach or viewpoint is superior toanother in the grand scheme of things. How one approaches qualitative research, andresearch in general, depends on a variety of personal, professional, political, and contextual factors. Ultimately, there is no right or wrong way of conducting a qualitativeresearch project. Nevertheless, some approaches and methods are more conducive tocertain types of qualitative inquiry than are others. A key distinction in this regard isthe difference between pure and applied research. It is the latter of these—appliedresearch—for which the contents of this book will be most (though certainly notexclusively) relevant.11

2COLLECTING QUALITATIVE DATAApplied research “strives to improve our understanding of a problem, with theintent of contributing to the solution of that problem” (Bickman & Rog, 2009, p. x). It isgenerally grounded in systematic and scientific methodology and is highly pragmaticin nature. Applied research can, and often does, generate new knowledge and contribute to theory, but its primary focus is on collecting and generating data to further ourunderstanding of real-world problems. It is through this lens that this book is written,with the intent of providing researchers with practical procedures and tools to collectand manage qualitative data in a rigorous and transparent manner.We begin this chapter by providing a definition of qualitative research that servesto frame the content and scope of the chapters that follow. We then provide a briefoverview of one of the main epistemological debates in the field—that between positivist and interpretivist perspectives. Despite the practical timbre of this book, we feelit would be a disservice to readers if we omitted this discussion.We then discuss some of the prevailing traditions in qualitative inquiry—phenomenology, ethnography, inductive thematic analysis and grounded theory, casestudy approaches, discourse-conversation analysis, and narrative analysis—as theyrelate to qualitative data collection. We cover these because they are related to data collection efforts and analytic strategies, both of which are key factors in research design.The second half of the chapter addresses qualitative research design. In this section, we provide guidance on when to use and, equally importantly, when not to usequalitative methods. Following this, we break the research design process down intosmaller components to help readers consider more thoughtfully the parameters of aresearch project, such as units of analysis, research scope, and the degree of structurein research design and data collection methods and instruments.WHAT IS QUALITATIVE RESEARCH?There are about as many definitions of qualitative research as there are books on thesubject. Some authors highlight the research purpose and focus:Qualitative researchers are interested in understanding the meaning peoplehave constructed, that is, how people make sense of their world and theexperiences they have in the world. (Merriam, 2009, p. 13)Others emphasize an epistemological stance:[Qualitative research is] research using methods such as participantobservation or case studies which result in a narrative, descriptive accountof a setting or practice. Sociologists using these methods typically rejectpositivism and adopt a form of interpretive sociology. (Parkinson &Drislane, 2011)

Chapter 1   Qualitative ResearchStill other definitions focus on the process and context of data collection:Qualitative research is a situated activity that locates the observer in theworld. It consists of a set of interpretive, material practices that makes theworld visible. These practices transform the world. They turn the world intoa series of representations, including field notes, interviews, conversations,photographs, recordings, and memos to the self. At this level, qualitativeresearch involves an interpretive, naturalistic approach to the world. Thismeans that qualitative researchers study things in their natural settings,attempting to make sense of, or to interpret, phenomena in terms of themeanings people bring to them. (Denzin & Lincoln, 2005, p. 3)While we don’t disagree with the above definitions, we don’t find them particularly useful in an applied research context. We prefer the simpler and more functionaldefinition offered by Nkwi, Nyamongo, and Ryan (2001, p. 1): “Qualitative researchinvolves any research that uses data that do not indicate ordinal values.” For theseauthors, the defining criterion is the type of data generated and/or used. In short,qualitative research involves collecting and/or working with text, images, or sounds.An outcome-oriented definition such as that proposed by Nkwi et al. avoids (typicallyinaccurate) generalizations and the unnecessary (and, for the most part, inaccurate)dichotomous positioning of qualitative research with respect to its quantitative counterpart. It allows for the inclusion of many different kinds of data collection andanalysis techniques, as well as the diversity of theoretical and epistemological frameworks that are associated with qualitative research.Qualitative Data TypesGiven our working definition of qualitative research, you can begin to imaginethe range of possible data types that qualitative research might generate. At oneextreme, we may have a single-word answer in response to an open-ended questionon a survey (e.g., In what city were you born? ). At the other end of thespectrum, a researcher could be dealing with a 50-page narrative of a participant’s lifehistory, produced from an in-depth interview. In order to narrow the range of datatypes for this book’s focus, we look to Ryan and Bernard’s (2000) typology of qualitative research that divides qualitative data into its three main forms—text, images, andsounds (Figure 1.1). Analysis of text is further subdivided into two primary components—text as an object of analysis (e.g., linguistic type approaches, such as structurallinguistics) and text as a proxy for experience.This book focuses mainly on data collection methods that produce textual andvisual data as a proxy for experience and as a means to understand the social, cultural,3

4COLLECTING QUALITATIVE DATAFigure 1.1 Typology of Qualitative ResearchQualitative DataAudioTextVideoText as Proxy for ExperienceSystematicElicitationText as Object of AnalysisFree-Flowing TextAnalysis of:ConversationAnalysis of:Analysis of:Free lists, pile sorts,paired comparisons,triad tests, and framesubstitution tasksWordsKWICWord CountsSemantic NetworksComponential AnalysisCognitive MapsTaxonomiesMental sGrounded TheorySchema AnalysisClassic Content AnalysisAnalytic Induction/Boolean AlgebraEthnographic Decision ModelsSource: Ryan and Bernard (2000).and physical context in which behavior occurs. The methods covered here—participantobservation, in-depth interviews, and focus groups—are the most commonly usedmethods in applied qualitative inquiry. We do, however, cover other methods such assystematic elicitation and document analysis in Chapter 6, since these are also important, often-used methods in applied qualitative inquiry.A common thread throughout almost all forms of qualitative research is aninductive and flexible nature. Though there are certainly a few qualitative data collection and analysis techniques that are more structured and deductively oriented thanothers (e.g., content analysis), most research initiatives in the qualitative vein take aniterative approach. Flexibility can be built into the research design itself by employinga theoretical sampling strategy in which a researcher adjusts the sampling procedures during the data collection process based on incoming data (see Chapter 2).Another defining attribute of qualitative research is the open-ended and inductivestyle of questioning and observation. The quintessential feature of both in-depth interviews and focus groups is the use of open-ended (though not necessarily unscripted)questions, which are followed up with probes in response to participants’ answers. In fact,inductive probing is the sine qua non of these methods and is why we devote a significantamount of attention to it in Chapters 4 and 5. Likewise, participant observation is much

Chapter 1   Qualitative Research5more inductive and flexible compared to its quantitative cousin, direct observation. Whileparticipant observation can benefit from semi-structured data collection templates andother types of tools for focusing attention (covered in Chapter 3), in applied research, it isalmost always used in an exploratory capacity, to help develop research focus and set theparameters for subsequent data collection activities.EPISTEMOLOGICAL PERSPECTIVESThe epistemological landscape in qualitative research is as diverse and complex asthe various disciplines that employ qualitative methods. We don’t attempt to recreateit here. Given the practical orientation of the book, we focus mostly on methodological procedures and offer actionable suggestions for carrying out qualitative researchin a rigorous manner. At the same time, we feel that researchers (and future researchers) need at least to be aware of the ongoing debates in social and behavioral sciencepertaining to the philosophy of knowledge and the scientific method. Below, webriefly address the two most commonly referred to approaches—interpretivism andpositivism or post-positivism. We briefly touch upon a relatively new epistemologicalviewpoint that has emerged from theoretical physics—model-dependent realism—which, in our view, may provide a useful philosophical framework for qualitativeresearch and the social and behavioral sciences in general.InterpretivismThough there are various definitions of interpretivism, for brevity we likeWalsham’s (1993) description, which posits thatinterpretive methods of research start from the position that our knowledgeof reality, including the domain of human action, is a social construction byhuman actors and that this applies equally to researchers. Thus there is noobjective reality which can be discovered by researchers and replicated byothers, in contrast to the assumptions of positivist science. (p. 5)Proponents of the interpretive school, popularized by scholars such as CliffordGeertz (1973), argue that the scientific method is reductionist and often misses thepoint of qualitative research. Instead, this approach, stemming from a hermeneutictradition,1 is more interested in interpreting deeper meaning in discourse that is represented in a collection of personal narratives or observed behaviors and activities. AsGeertz (1973, p. 29) explains,1Hermenuetics was originally the practice of interpreting meaning within biblical text. Usageof the term has expanded to include interpretation of nonreligious texts as well, in search ofunderlying sociopolitical meaning.

6COLLECTING QUALITATIVE DATATo look at the symbolic dimensions of social action—art, religion, ideology,science, law, morality, common sense—is not to turn away from the existentialdilemmas of life for some empyrean realm of deemotionalized forms; it is toplunge into the midst of them. The essential vocation of interpretiveanthropology is not to answer our deepest questions, but to make available tous answers that others, guarding other sheep in other valleys, have given, andthus to include them in the consultable record of what man has said.As such, an interpretive perspective is based on the idea that qualitative researchefforts should be concerned with revealing multiple realities as opposed to searchingfor one objective reality. In Denzin’s words, “Objective reality will never be captured. Indepth understanding, the use of multiple validities, not a single validity, a commitment to dialogue is sought in any interpretive study” (Denzin, 2010, p. 271).We recognize that the interpretive field is much more diverse than we portrayhere and includes different perspectives such as post-structuralism, experimentalism(not to be confused with experimental design), and critical theory. For readers whowish to read more about these perspectives and the ongoing epistemological debates,we suggest looking at Denzin and Lincoln (2011) and Alvesson and Skoldberg (2009).Positivism, Post-Positivism and Model-Dependent RealismPositivism, at least within social and behavioral science, views knowledge differently from interpretivism. Traditional positivism as envisioned by Compte (i.e., “logical”or “rigid” positivism) assumes that there is an objective reality independent of theobserver and that, given the right methods and research design, one can accuratelycapture that reality. Nowadays, there are few supporters of rigid or logical positivism 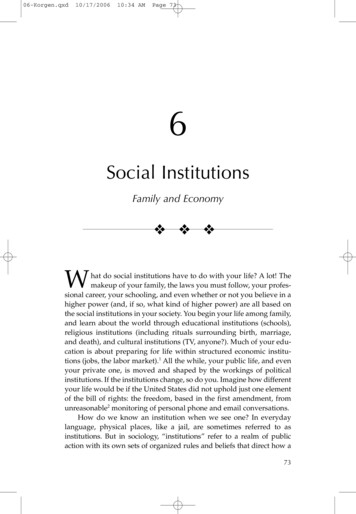 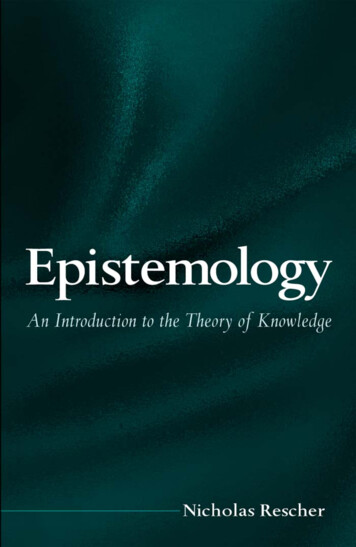 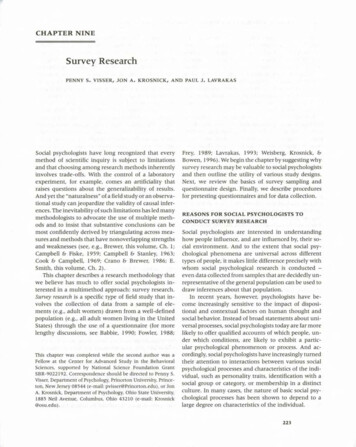 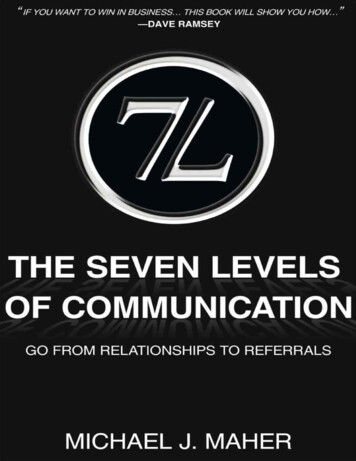 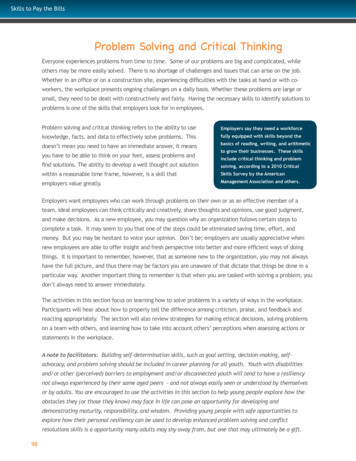 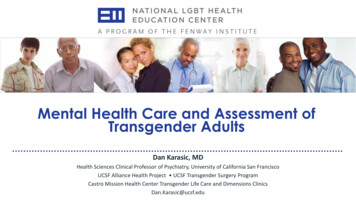 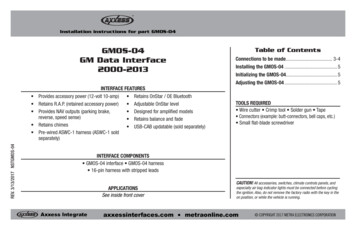 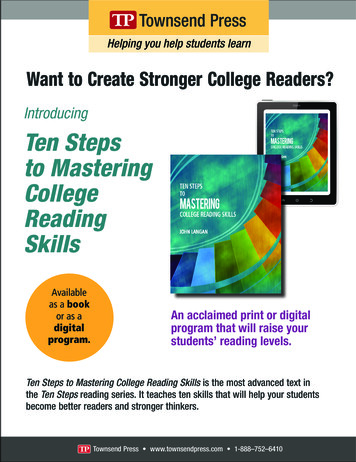 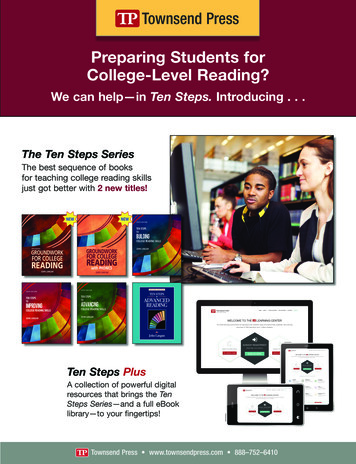 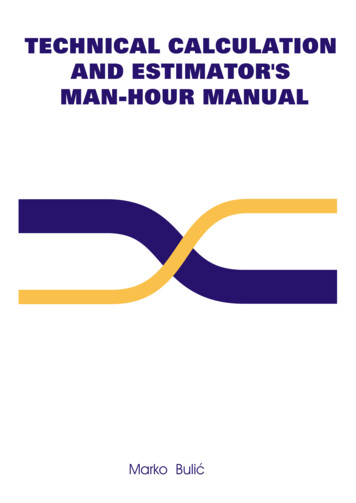