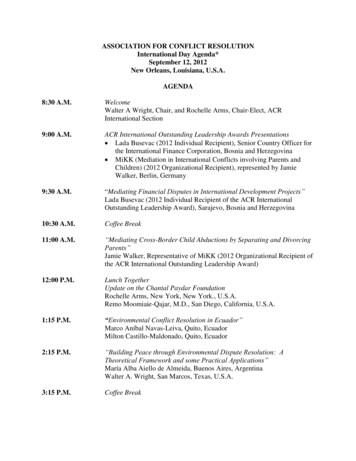 3:45 P.M.“Conflict Resolution Techniques and the Preservation of Panama’sRainforests”Al Amado, Houston, Texas, U.S.A. and Quito, EcuadorCatherine Potvin, Montreal, Quebec, Canada5:00 P.M.AdjournSPEAKERS’ BIOGRAPHIES**María Alba Aiello de Almeida, an attorney and mediator from Buenos Aires,Argentina, received her law degree from the Universidad del Salvador and hermediation training from the Universidad Católica Argentina, both in Buenos Aires.She has mediated many types of civil, commercial and family cases. She has taughtcourses in professional ethics at Universidad del Salvador and courses in law andalternative dispute resolution (ADR) at Universidad Nacional de Lomas de Zamora.She has also been a guest lecturer at several U.S. and Latin American universitiesand spoken on legal and ADR topics at numerous conferences in the United Statesand Latin America. She is the author of one book and co-author of five others,mostly on ADR topics, and she has authored numerous law and ADR articles inpublications throughout Latin America. Currently, she is a Director-at-Large of theInternational Section of the Association for Conflict Resolution, and she is theAcademic Secretary and an Instructor for Consultora Equipo I.M.C.A., a nonprofitADR consulting firm in Buenos Aires.Al Amado is the Director of the American Bar Association’s Rule of Law Initiative in Ecuador,and the Founding Director of the nonprofit Latin American Collaborative Education Project(LACEP). He has over 20 years of diverse trial, appellate, and business-managementexperience, both in private practice and in-house as Director of Latin America for a global fitnesscompany. He holds a J.D. from Emory University, where he currently is a Fellow of the EmoryCenter for Advocacy and Dispute Resolution. He also holds a B.B.A. and an LL.M. from TheUniversity of Texas at Austin, where his course of study focused on international law, conflictresolution, and interdisciplinary Latin American studies. He has served as a private mediator,arbitrator, and trial and dispute-resolution consultant. He is bilingually fluent in Spanish andbicultural, having lived in Mexico for many years. He has been a frequent instructor, trainer, andadjunct faculty member for diverse university courses in the United States, as well as in foreigncountries.Rochelle Arms is the Restorative Justice Coordinator of the New York Peace Institute (formerlythe Safe Horizon Mediation Program). She is responsible for mediation and restorative justiceinitiatives with the Brooklyn District Attorney’s Office, Juvenile Justice Courts, schools, andcommunity agencies in Brooklyn and Manhattan. In the last 10 years, she has worked both in theU.S. and abroad in collaborative processes and restorative justice projects with a variety ofgroups, including civil-society organizations in India, indigenous peoples in Argentina,immigrants and refugees, and homicide offenders and victim survivors in Kentucky. Rochellewas a Rotary Peace Fellow in Buenos Aires, Argentina from 2003 to 2005. She is originally from

Panama and currently is the Chair-Elect of the International Section of the Association forConflict Resolution.Lada Busevac, of Bosnia and Herzegovina, has spearheaded a new business line devoted toADR as part of the International Finance Corporation (IFC) and the World Bank's jointInvestment Climate Department. Leading an international team, Ms. Busevac developed amethodology to determine when countries or communities could benefit from ADR approaches,primarily with – though not limited to - commercial disputes. The methodology she helped todevelop included a step-by-step analysis of how to evaluate and then implement an ADRprogram or center, including consultations with affected stakeholders such as ministries, legalbars, business and commercial associations, and local community members. Ms. Busevac’s teamled trainings for many mediators and helped to establish the business model for a number ofADR centers around the world. Ms. Busevac is the individual recipient of the 2012 ACRInternational Outstanding Leadership Award.Milton Castillo-Maldonado, an Ecuadorian attorney who received a doctorate in jurisprudencefrom the Pontífica Universidad Católica del Ecuador, also received a master’s degree ineconomic law from the Universidad Andina Simón Bolívar and studied Constitutional Law at thegraduate level at the Universidad de Salamanca in Spain. He is a judge in civil matters, and wellas Judge of the Second and Fifth Criminal Law Courts of Pichincha in Ecuador. He is aninternational arbitrator, a newspaper editorialist, and a university professor.MiKK (German acronym for “Mediation in International Conflicts involving Parents andChildren”) is a small non-profit group located in Berlin, Germany that provides mediationtraining and has a roster of mediators to mediate in cross-border family conflicts, including childabduction cases, across all of Europe. The organization has been handling such cases since 2002.The distances involved in cross-border family conflicts can intensify the severity of the conflicts.Parents are saddened and confused by the breakdown of their relationship or marriage and afraidof losing their children forever. Mediation in these cases must be flexible and has to conform tothe 1980 Hague Convention on the Civil Aspects of International Child Abduction. MiKK’smediation model is unique, requiring co-mediators to come from both countries/culturesinvolved, to represent both genders, and to have fluency in the parties’ languages. Mediationpairs must include one mediator with a psychosocial background and the other with a legalbackground, and both are trained to act as neutral facilitators. The mediators are trained in allmediation styles and adapt these according to the needs of the clients. MIKK’s family mediationmodel is a reflection on how we can apply cross-border and cross-cultural dispute resolution inmany different areas. MiKK is the organizational recipient of the 2012 ACR InternationalOutstanding Leadership Award.Remo Moomiaie-Qajar is the Founder and President of the Chantal Paydar Foundation, anonprofit organization that promotes numerous peace, justice, and conflict resolution principles.Dr. Moomiaie-Qajar is a medical doctor, trained surgeon, inventor, and social entrepreneur. Hehas lead the Chantal Paydar Foundation through the nascent stages of development inestablishing and executing its mission. The Chantal Paydar Foundation was establishedfollowing the death of his cousin and close confidant, Chantal, a young professional peacedeveloper who worked in Central America, South America, and Africa. His motivation to

continue her vision of a more just and peaceful world lead to the foundation's three-tieredapproach towards advancing the greater peace, justice, and conflict resolution movement througheducation, relief, and advocacy (ERA). In the first year of operations, Dr. Moomiaie-Qajar haspersonally overseen the implementation of Undergraduate International Peace Grants and the“Kitchen in a Box” Gulu, Uganda project, addressing the foundation’s education and reliefbranches. He is currently in the production phases of directing and filming of a documentaryfilm, “Redefining the Peacemaker,” which also addresses education and advocacy for theprofession.Marco Aníbal Navas-Leiva is a productivity engineer from Ecuador who has done graduatework in political science, international relations and international commerce. A professor atPontífica Universidad del Ecuador and Escuela Politécnica del Ejército, he is also a consultant,advisor and trainer on issues of management, integral leadership, human capital, productivity,competitiveness, and development. He teaches ADR courses, among others, and he often speaksat conferences throughout Latin America. In addition to Spanish, he speaks, English, Portugueseand Italian.Catherine Potvin received a Ph.D. from Duke University in North Carolina. Since then, she hasworked on issues related to global climate change . She is a Professor in the Department ofBiology at McGill University in Montreal, Quebec, Canada, where she is also the Director of thePanama Field Study Semester, an undergraduate program in environment and development. Inrecent years, she has developed expertise in tropical forest ecology and carbon storage. She hasalso worked with the indigenous Embera people of Panama since 1994, which helped herdevelop participatory approaches to integrate the human dimension into biological analysis.Beginning in 2002, she worked closely with Panama’s National Authority for the Environment(ANAM) on forest carbon stocks, and she served as Panama’s negotiator of REDD in the U.N.Framework Convention on Climate Change (2005-2009). She is currently part of the TechnicalAssessment Panel of the Forest Carbon partnership Facility of the World Bank. Her currentresearch in Panama spans a broad range of issues from remote sensing to capacity building andconflict resolution, the unifying themes being forest conservation and climate change. Duringthe course of her career, she has edited two books and published approximately 85 scientificjournal articles or book chapters.Jamie Walker is originally from Atlanta and has lived in Germany since 1977. She has degreesin psychology and adult education, and she has been working as a conflict resolution trainersince 1981 and as a mediator since 1991. She is a certified mediator and mediation trainer withthe Bundesverband Mediation e.V. [Federal Association of Mediation] in Germany. She hasconducted numerous projects and published widely in the fields of violence prevention inschools and communities and peace education. From 1999 to 2008, she was head of the CentralMediation Bureau in Berlin. She has worked as a development consultant in countries such asAfghanistan and Sri Lanka. Currently, she focuses on mediation and mediation training in crossborder family conflicts (including child abduction cases) and is vice president of the Germanassociation MiKK e.V. / Mediation in international Conflicts involving Parents and Children.Most recently, she was involved in the EU-funded project Training in International FamilyMediation; besides training 70 mediators and mediation trainers from 28 European countries, shealso co-conducted a MiKK training in international family mediation for 30 Australian familymediators. She will represent MiKK at International Day.

Walter A. Wright is an associate professor in the Legal Studies Program of the Department ofPolitical Science at Texas State University, where he teaches courses in law and AlternativeDispute Resolution. An attorney, mediator, and arbitrator, he received B.A. and J.D. degreesfrom the University of Houston and an LL.M. in International Legal Studies from New YorkUniversity. He is former president of the Texas Association of Mediators and the Association ofAttorney-Mediators. His current activities include service as co-director and editor of ElAcuerdo, an ADR newsletter published in Buenos Aires, Argentina; as Chair of the InternationalSection of the Association for Conflict Resolution; and as a member of the board of directors ofthe Hays County (Texas) Dispute Resolution Center. He has published extensively in the UnitedStates and Latin America. During the past seventeen years, he has enjoyed teaching ADRcourses and conducting facilitated dialogues in foreign countries such as Argentina, Uruguay,Mexico, Ecuador, Panama, and Nicaragua.

Sep 12, 2012 · mediation training from the Universidad Católica Argentina, both in Buenos Aires. She has mediated many types of civil, commercial and family cases. She has taught courses in professional ethics at Universidad del Salvador and courses in law and alternative dispute res

Resolution : A RESOLUTION OF THE TOWNSHIP OF NORTH .