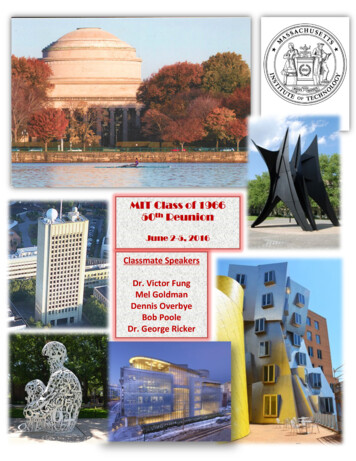 PROGRAM DESCRIPTIONSSession 1 - Influencing Global Changes 5:00 – 7:45 PM, Kirsch Auditorium, 32-123China’s New Normal and the Role of Hong Kong, Dr. Victor Fung: I will try to give apicture of China’s emergence since its economic opening in 1979 through the present “NewNormal” with a feel for how the future will unfold over the next five years with theimplementation of the 13th Five Year Plan 2016-2020. Against this background, I will describethe role that Hong Kong has played through Reunification on July 1, 1997 and how it will evolvein the future. At the same time, I will try to provide a perspective from the point of view of abusiness operating in this region, including our family company Li & Fung.Changing the World: My Career as a Think Tank Entrepreneur, Robert Poole: Howdid an introverted MIT nerd end up founding and managing for two decades a successful publicpolicy think tank? That’s the story I will relate at our 50th reunion. After researching andwriting my first-ever magazine article (calling for airline deregulation, in 1969) in a start-upmagazine called Reason, I started to see writing as a powerful tool for changing hearts andminds. A year later, several friends and I acquired the magazine and ran it as a hobby businessfor seven years. At that point, it was either turn it into a real business or shut down, so wecreated Reason Foundation as a nonprofit think tank. From three people and a budget of 200,000, we grew it into a bi-coastal think tank (Los Angeles and DC) with 65 people and a 10 million budget. The magazine has won national awards, our Reason TV is very popular, andour public policy research has had considerable impact—such as inventing and popularizingexpress toll lanes on freeways, helping mayors and governors privatize public services,popularizing charter schools and other school-choice policies, and championing the“corporatization” of the U.S. air traffic control system. Reason has advised congressionalcommittees, several White House administrations, and many federal and state agencies onimplementing new policy ideas. Along the way, I have met legendary people such as RobertHeinlein, Milton Friedman, Margaret Thatcher, Burt Rutan, Herb Kelleher, John Stossel, DrewCarey, and many others, including fellow MIT alums Charles and David Koch. I overcame mynerdly introversion, teaching myself public speaking and fund-raising—it was either that or seemy creation die. But I also figured out after 20 years as CEO, that fund-raising and managementwere not my strong suits—policy research is. My successor CEO has doubled the size of theorganization since 2001, and I have gone on to do the best policy work of my career.A Journey from MIT to the Peace Corps to a Winery, Mel Goldman: Mel will relatehis unusual trajectory from MIT to Peace Corps (in Nepal where he met his wife) through hisentrepreneurial ventures and education and his tussles with bureaucracies. He will talk abouthis work in exciting countries like Colombia and India and unique experiences including helpingdevelop the young venture capital industry in India, helping structure one of the first watershedmanagement projects anywhere and interacting with phenomenal people in so many parts of theworld. He will then relate how he completely changed course and became a farmer and a teacher2

and built a winery over the past 18 years. There will be threads of MIT that will tie it all togetherof course.One thread relates to MIT’s encouragement of entrepreneurship. His first such endeavor was ahigh school math program in Nepal, followed by the first private consulting company in Nepal.Education forms another thread. Mel has been lucky to be involved with a variety of educationalinstitutions spread out over his career since MIT. First, he went to grad school, Princeton’sWoodrow Wilson School, 7 years after graduating college. After another 15years, he took a“sabbatical” as a Visiting Fellow at University of Sussex, Science Policy Research Unit in the UK.And finally, for the past 13 years, he has been lucky enough to serve as a part-time teacher atCornell.His temporary sojourn after grad school to the World Bank ended up lasting 22 years. Despitehis allergy to bureaucracy he managed to do some interesting and useful things.Highlights included eight years working on Colombia and becoming the Bank’s Representativein Colombia and helping untangle some important projects in various sectors includingpetroleum, electricity and rural development. (The MIT connection in Colombia was wonderfuland invaluable.) And then (in part because of the MIT credential) he became the SeniorTechnology Development Officer for Asia working extensively on various countries, mostparticularly India where he was involved in helping initiate the VC industry and in reforming theapproaches of many research institutes in India. He had a love affair with India and his life wassaved there as well.The story will highlight how an MIT grad became a farmer and started up a winery in “old age”and is keeping at it crazily. The challenge has at times been overwhelming but the winery hasmanaged to garner two prizes in France and is considered on one list the 65th best winery in theUS (among tens of thousands.)Session 2 – Earth & the Universe5:00-6:45 PM, Room 32-141In Search of New Worlds: MIT’s Quest for New Earths and Super-Earths with the TESSSatellite, Dr. George Ricker: Are we alone in the Universe? Is there life on planetsorbiting other stars in our Galaxy? These questions have been repeatedly asked byphilosophers and scientists since ancient times. Answers—at least for the secondquestion— may well be known during the lifetime of members of the Class of ’66!Recent discoveries by the Kepler mission of several thousand “exoplanets” orbitingdistant stars have provided a sound new basis for a path to the answers. Just next year,the Transiting Exoplanet Survey Satellite (TESS)—an MIT-led initiative funded byNASA—should begin pinpointing potentially habitable planets orbiting the brighteststars that are nearest to Earth. In its two year mission, TESS will search the entire skyfor planets comparable in size to Earth, as well as rocky planets that are slightly larger(so-called “Super-Earths”). Such planets, which are not detectable in ground-basedsearches, could prove to be favorable sites for the development of life. TESS’s newplanets will be subject to intense scrutiny with NASA’s upcoming James Webb Space3

Telescope (JWST) beginning in 2019, as that powerful new instrument searches forevidence of biogenic spectral signatures in the atmospheres of those new planets. Theresults of those searches by JWST should be known to us before the next reunion ofthe Class of ’66. When future generations dispatch an interstellar probe to one ofthese New Worlds (.or even set out to colonize it), a planet in a TESS-discovered starsystem could well be their chosen destination.The Adventures of a Cosmic Affairs Correspondent, Dennis Overbye: Ispend my time watching the Rickers and the Einsteins of the world from the bleachers.This is how I came to stop fearing quantum field theory and came to love the Higgsboson.SPEAKER BIOGRAPHIESDr. Victor Fung: After completing Course VI2A SB in June and SM in September 1966, I wentto Harvard University for a PhD in BusinessEconomics, finishing in 1970 to work for twoyears in New York City at Citibank. Returned toHarvard Business School in 1972 as AssistantProfessor until 1976 when I joined the familybusiness Li & Fung in Hong Kong. The companywas founded in 1906 in Southern China as atrading company dealing with exports of Chineseproducts. Today it is a major consumer productssourcing, wholesaling and retailing company headquartered in Hong Kong and operating in 60countries with 25 billion in sales and 40,000 employees. The last twenty five years wasfocused on the development and orchestration of global supply chains and more recently onomni-channel retailing.In 2011, I stepped down as Li & Fung public company chairman in favor of my brother Williamand became Chairman of our privately held family holding company and the Fung Foundation,which focuses philanthropic educational and think tank activities. Current interest in WaterConservation and providing Asian perspectives on global issues like sustainable and inclusiveeconomic development and Innovation and Technology.Happily married to Julia Shen since 1969 with three children and six grandchildren.Academic:SB, Electrical Engineering, MIT, 1966SM, Electrical Engineering, MIT, 1966PhD, Business Economics, Harvard University, 19704

Melvin Goldman: Melvin’s biography is part of his programdescription.Academic:SB, Humanities and Mathematics, MIT, 1966MPA, Economic Development, Princeton University,Woodrow Wilson School. 1975Visiting Fellow, University of Sussex, Science Policy ResearchUnit, 1990-91Visiting Lecturer, Johnson School, Cornell University, 20022016Dennis Overbye: After graduating fromMIT in 1966 I worked for Boeing and EG&Gand spent a year in graduate school at UCLAostensibly studying astronomy, interspersedwith long periods of unemployment andother existential woolgathering, and thendecided I was the next great Americannovelist.I entered the realm of journalism in 1976when I got a job at Sky & Telescopemagazine as an assistant typesetter andproofreader. I joined Time Inc in 1980 whenDiscover magazine was founded, and left itin 1985 to write books. I've been at The New York Times since 1998. I'm now a science reporterfor the Times who has been covering the universe for more than 30 years. Among other things,I'm currently writing about "proliferation of planets beyond our own solar system and themysterious dark energy that seems to be souping up the expansion of the universe."My wife Nancy Wartik, also works for the Times and our daughter Mira will be 14 by the timeyou read this. We live in Manhattan.Academic:SB, Physics, MIT, 19665

Robert Poole: After two years at Sikorsky Aircraft, I moved toSanta Barbara and spent five years working for General ResearchCorp., a government policy think tank. In 1978 I co-foundedReason Foundation, a free-market-oriented public policy thinktank. I served as CEO and President until 2001, when I steppeddown to devote the rest of my career to policy work as Reason’sDirector of Transportation Policy. I’m the author of two books(one on outsourcing municipal services, the other on rethinkinghighway policy) and editor of four others. I married my secondwife, Lou Villadsen, in 1983, and we moved (along with Reason) toLos Angeles in 1986. Lou and I relocated to South Florida in 2003,and I am now a full-time telecommuter. I serve on standing andspecial committees of the Transportation Research Board, andhave been appointed by several governors to serve on one-timestudy committees. I’m a life-long science fiction reader, a life-longrail fan, and a life-long model railroader, currently building mydream layout in a 1500 sq. ft. room in our house.Academic:SB, mechanical engineering, MIT, 1966SM, mechanical engineering, MIT, 1967Graduate work in operations research and management science, NYU, 1969Dr. George Ricker: Dr. Ricker is the Director of MIT’sDetector Laboratory within the Kavli Institute forAstrophysics and Space Research. He also serves as SeniorResearch Scientist at the Kavli Institute. His work in spaceastronomy has involved devising a series of spacebornetelescopes and cameras, first flown from high altitudeballoons for his MIT dissertation, then subsequently fromsatellites during his postgraduate career. He served as thePrincipal Investigator (PI) for the Solid State ImagingSpectrometer on the Japanese-US ASCA mission (1992),Deputy-PI for the Advanced CCD Imaging Spectrometer onNASA's Chandra X-ray Observatory (1999), and US PI forthe X-ray Imaging Spectrometer on the Japanese-US AstroE mission (2000). Dr. Ricker was the mission PI for the international High Energy TransientExplorer (HETE) – a small scientific satellite incorporating instruments from France, Japan,and the United States – which was launched in 2000 and operated in orbit for six years. Builtand integrated at MIT, HETE was the first satellite entirely devoted to the study of cosmicgamma-ray bursts. Most recently, Dr. Ricker serves as Mission PI for the Transiting ExoplanetSurvey Satellite (TESS), scheduled for launch by NASA on a SpaceX Falcon rocket in 2017.Academic:SB, Physics, MIT, 1966MS, Astronomy, Yale, 1967PhD, Physics, MIT, 19716

May 09, 2016 · to Harvard University for a PhD in Business Economics, finishing in 1970 to work for two years in New York City at Citibank. Returned to Harvard Business School in 1972 as Assistant Professor until 1976 when I joined the family business Li & Fung in Hong Kon

Between Yom Yerushalaim and the 50th Anniversary of the .