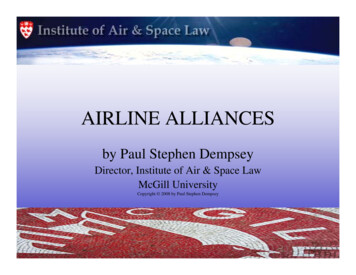 Like dogs marking territory, airlines around the world are sniffing eachother's tail fins looking for partners."Daniel Riordan“The hardest thing in working on an alliance is to coordinate theactivities of people who have different instincts and a differentlanguage, and maybe worship slightly different travel gods, to get themto work together in a culture that allows them to respect each other’shabits and convictions, and yet work productively together in anenvironment in which you can’t specify everything in advance.”Michael E. Levine“Beware a pact with the devil.”Martin Shugrue

Airline Motivations ForAlliances the desire to achieve greater economies of scale,scope, and density; the desire to reduce costs by consolidatingredundant operations; the need to improve revenue by reducing the levelof competition wherever possible as markets areliberalized; and the desire to skirt around the nationality ruleswhich prohibit multinational ownership andcabotage.

Code SharingThe term "code" refers to the identifier used inflight schedule, generally the 2-characterIATA carrier designator code and flightnumber. Thus, XX123, flight 123 operatedby the airline XX, might also be sold byairline YY as YY456 and by ZZ as ZZ9876.Each would list the flight as its own.

“Code sharing is unnecessary for,indeed irrelevant to, anylegitimate purpose or actualservice. Code sharing doesn'tenable an airline to fly to anymore places. It just enables theairline to mislead travellers intothinking that they fly to placesthey don't. I call that fraud.” by Edward Hasbrouck, authorof "The Practical Nomad"