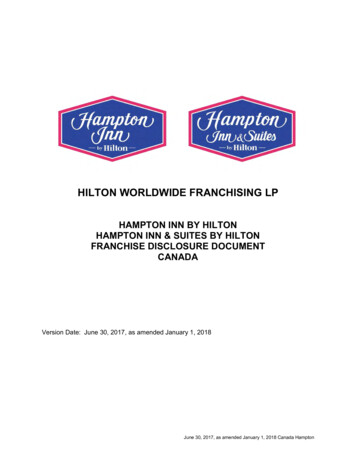 ARTICLE 1BUSINESS BACKGROUND OF THE FRANCHISOR1.1The FranchisorTo simplify the language in this Disclosure Document, “we” or “us” means Hilton WorldwideFranchising LP. “You” means the person(s) who signs the Franchise Agreement. If you are abusiness entity, “you” includes the business entity and its owners. The “Brand” refers to thename or names under which we will license you to operate a hotel. This Disclosure Documentdescribes our licenses for hotels under the Hampton Inn/Hampton Inn by Hilton (collectivelyreferred to as “Hampton Inn”) and Hampton Inn & Suites/Hampton Inn & Suites by Hilton(collectively referred to as “Hampton Inn & Suites”) Brands. Capitalized words not defined inthis Disclosure Document have the meaning set forth in the Franchise Agreement.We are a limited partnership formed on March 12, 2014, under the laws of England and Wales,with registered number LP015958. Our principal business address is Maple Court, Central Park,Reeds Crescent, Watford, Hertfordshire WD24 4QQ UK and our telephone number is 44 207856 8000. In connection with the offer of this franchise, we do business under the names“Hampton Inn,” “Hampton Inn by Hilton,” “Hampton Inn & Suites,” and “Hampton Inn & Suites byHilton.”We became the franchisor of hotels which operate under the Hampton Inn and Hampton Inn &Suites Brands for all locations outside the United States of America, including the District ofColumbia and its territories and possessions (“US”) in July 2014.Our parent company is Hilton Domestic Operating Company Inc., a Delaware corporationformed on July 12, 2016 (“Hilton”). Hilton’s parent company is Hilton Worldwide Holdings Inc.,a Delaware corporation formed on March 18, 2010 (NYSE: HLT) (“Hilton Worldwide”). Theprincipal business address of both companies is 7930 Jones Branch Drive, Suite 1100, McLean,Virginia 22102 USA.Hilton became our parent company on January 4, 2017, as the successor to our previousparent company, Park Hotels & Resorts, Inc. (“Park”). Together, Hilton and Park haveconducted a guest lodging business since 1946. Park was originally called Hilton HotelsCorporation ("HHC") from May 29, 1946 to December 19, 2009. It changed its name to HiltonWorldwide, Inc. (“HWI”) on December 20, 2009, and to Park Hotels & Resorts Inc. on June 1,2016. On January 4, 2017, Park became an independent company in a spin-off transaction. Asa result of that spin-off, nearly all company-owned hotels were divested with Park. Forconvenience, all references to “Hilton” in this Disclosure Document include HHC, HWI, and Parkduring the relevant time frames for each, unless otherwise noted.Our predecessor, Hampton Inns International Franchise LLC, a Delaware limited liabilitycompany, offered franchises for Hampton Inn and Hampton Inn & Suites hotels for all locationsoutside the US from October 2007 through June 2014. Before that time, certain internationalsubsidiaries of Hilton (collectively, “Hilton International Companies”) offered franchises forHampton by Hilton locations outside the Americas from 2006 to October 2007. In October 2007,the Hilton International Companies assigned all of their Franchise Agreements governingHampton Inn and Hampton Inn & Suites hotels to HLT International Existing Franchise HoldingLLC, a Delaware limited liability company.1June 30, 2017, as amended January 1, 2018 Canada Hampton

Hilton Worldwide Manage Limited as the Franchise Service ProviderHilton Worldwide Manage Limited (“HWML”) is our general partner and affiliate. HWML is alimited company formed on December 7, 2010, under the laws of England and Wales, withregistered number 7462067. HWML has provided development and management services toselected hotels outside the US since July 2014.Under an operating agreement (“Operating Agreement”), we and certain other affiliates engagedHWML to perform our respective duties and obligations under our Franchise Agreementsoutside the US. As long as we are your franchisor and the Operating Agreement is in effect,HWML will provide services to you on our behalf under the terms of your Franchise Agreement,either directly or through other of our affiliates. However, as long as we are your franchisor wewill be responsible for fulfilling all our duties and obligations under your Franchise Agreement. IfHWML fails to perform its obligations under the Operating Agreement, it may be replaced as thefranchise service provider.Hilton Worldwide Manage Limited as the FranchisorOn January 1, 2018, two changes were made in our relationship with HWML. First, all existingFranchise Agreements that we had previously signed for Hilton Worldwide brand hotels inCanada were transferred to HWML. Second, HWML became the franchisor for all HiltonWorldwide brands for all new locations outside the US, except in Canada (and a limited numberof other territories).We remain the initial franchisor for all Hilton Worldwide brand hotels in Canada. However, allnew Franchise Agreements that we sign for hotels in Canada will be transferred to HWMLannually, on or about December 31st of each year (an “Annual Sweep”). The purpose of thisarrangement is for tax efficiency. As a result, HWML will become the franchisor for, and provideservices for, you on a going-forward basis after the first Annual Sweep following the executionof your Franchise Agreement. Accordingly, with respect to your Franchise Agreement,references to us in connection with the performance of our obligations under your FranchiseAgreement will mean HWML after the first Annual Sweep following the execution of yourFranchise Agreement.For the avoidance of doubt, we have included HWML when considering matters disclosed in thisDisclosure Document and have made notations as appropriate. HWML’s financial statementsare attached as Exhibit G-1.The person authorized to accept service on behalf of us and HWML in Alberta is LawrenceWeinberg at Cassels Brock & Blackwell, LLP, Suite 1250, Millennium Tower, 440 – 2nd AvenueSW, Calgary, Alberta, T2P 5E9; in British Columbia at Suite 2200, HSBC Building, 885 WestGeorgia Street, Vancouver, BC, V6C 3E8; and in Ontario at Suite 2100, 40 King Street W,Toronto ON M5H 3C2. The person in Manitoba authorized to accept service on behalf of usand HWML is Gregory J. Tallon, Thompson Dorfman Sweatman LLP, 201 Portage Avenue,Suite 2200, Winnipeg, Manitoba R3B 3L3. We and HWML do not have a registered agent forservice of process in the provinces of New Brunswick, or Prince Edward Island or elsewhere inCanada.2June 30, 2017, as amended January 1, 2018 Canada Hampton

1.2The Franchised BusinessWe license the Hampton Inn hotel system ("System"), which consists of the elements, includingknow-how, which we periodically designate to identify hotels operating worldwide under our twoBrands: “Hampton Inn” hotels, designed to provide distinctive, high-quality hotel service to thepublic at moderate prices, and “Hampton Inn & Suites” hotels, designed to combine standardguest rooms with a significant block of guest suites. (Guest rooms and guest suites are referredto as "Guest Rooms".) Although we offer licenses in Canada for hotels under the “by Hilton”tagline, under rare circumstances, we may still permit franchisees to operate hotels in Canadaunder the names “Hampton Inn” and “Hampton Inn & Suites” without the “by Hilton” tagline. TheSystem currently includes the Marks (see Article 16); access to a reservation service;advertising, publicity and other marketing programs and materials; training programs andmaterials; standards, specifications and policies for construction, furnishing, operation,appearance and service of the hotel; and other elements we refer to in the FranchiseAgreement (a copy of which is attached as Exhibit A), in the Manual (see Article 14) or in othercommunications to you, and programs for our inspecting your hotel and consulting with you. Wemay add elements to the System or modify, alter or delete elements of the System.We franchise the non-exclusive right to use the System in the operation of your hotel undereither the Hampton Inn Brand or the Hampton Inn & Suites Brand, at a specified location. Youmust follow the high standards we have established as the essence of the System and you maybe required to make future investments. The Franchise Agreement you sign will provide for newdevelopment, change of ownership, re-licensing, or conversion, depending on your situation.These situations are referred to in this Disclosure Document as "New Development," "Changeof Ownership," “Re-licensing”, and "Conversion," respectively. Adaptive Reuse is also identifiedas a category on the Franchise Application. It is a form of conversion.During the term of the license, we may offer to amend your Franchise Agreement as part of theoffer of a new program or for some other reason. If you agree to the proposed changes, youmust sign our then current form of amendment that will contain our standard estoppel andgeneral release.1.3Our Affiliates and their PredecessorsHilton, through its subsidiaries, currently holds the rights to the following principal marks andtheir related guest lodging systems (“Hilton Worldwide Brands”): Canopy by Hilton, Conrad ,Curio - a Collection by Hilton, DoubleTree by Hilton, Embassy Suites by Hilton, Hampton by Hilton, Hilton , Hilton Garden Inn , Home2 Suites by Hilton, Homewood Suites by Hilton,Tapestry Collection by Hilton , Tru by Hilton, and Waldorf Astoria .Promus Hotel Systems, Inc., a Delaware corporation incorporated in May 1995 (“Promus”),licensed, owned and operated Hampton Inn and Hampton Inn & Suites hotels between May1995 and October 2007. Its predecessor franchised Hampton Inn hotels from 1983 to 1995,and franchised Hampton Inn & Suites hotels from 1993 to 1995. Promus also licensed, ownedand operated Embassy Suites hotels between May 1995 and October 2007 and its variouspredecessors did so between 1984 and May 1995. On December 1, 1999, Hilton acquiredPromus’s indirect corporate parent and Hilton became the ultimate parent of Promus and all itsaffiliates. On October 24, 2007, Promus assigned all of its Franchise Agreements governingHampton Inn and Hampton Inn & Suites hotels in the United States to our affiliate, HLT ExistingFranchise Holding LLC. Hampton Inns Franchise LLC, a Delaware limited liability company,3June 30, 2017, as amended January 1, 2018 Canada Hampton

A Consumer's Guide to Buying a Franchise