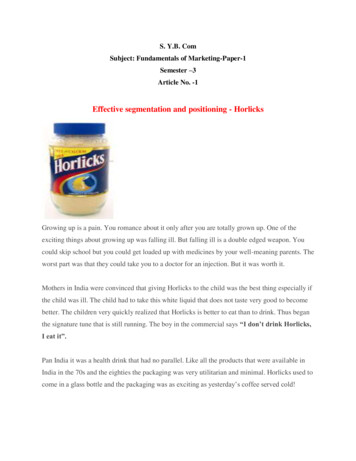 S. Y.B. ComSubject: Fundamentals of Marketing-Paper-1Semester –3Article No. -1Effective segmentation and positioning - HorlicksGrowing up is a pain. You romance about it only after you are totally grown up. One of theexciting things about growing up was falling ill. But falling ill is a double edged weapon. Youcould skip school but you could get loaded up with medicines by your well-meaning parents. Theworst part was that they could take you to a doctor for an injection. But it was worth it.Mothers in India were convinced that giving Horlicks to the child was the best thing especially ifthe child was ill. The child had to take this white liquid that does not taste very good to becomebetter. The children very quickly realized that Horlicks is better to eat than to drink. Thus beganthe signature tune that is still running. The boy in the commercial says “I don’t drink Horlicks,I eat it”.Pan India it was a health drink that had no parallel. Like all the products that were available inIndia in the 70s and the eighties the packaging was very utilitarian and minimal. Horlicks used tocome in a glass bottle and the packaging was as exciting as yesterday’s coffee served cold!

Horlicks meant everything to everybody. It was a health drink that everyone consumed. Rightfrom small children to very elderly people. Keeping the nutritional issues aside it was verystrange positioning tack.Horlicks realized this and came out with its own versions of different Horlicks for differentcustomers. Horlicks differentiated products now includeJunior Horlicks – for preschool children. Keeping the targeted customers in mind thepackaging is cute and the package has the picture of a small elephant which is very exciting forthe small children.

Horlicks regular - For general use. Regular Horlicks is the health drink for people of all ages.The packaging is contemporary and has great visuals to attract the children and the young adults.Horlicks mothers – is special nutritional drink with 26 vital nutrients designed keeping thespecific needs of the pregnant and breast feeding women. The packaging is very interesting – itis shaped like an hours glass. Hour glass is the shape that all women crave for and this craving issubtly cashed by Horlicks by making its "Horlicks mothers” shaped like a house glass.Horlicks Lite and Lite bite - A nutritional drink and snack specially designed for all healthconscious adults and is also suitable for use by people with diabetes. The packaging again isvery interesting. The Horlicks Lite is thin and tall. The Horlicks Lite drinkers are healthconscious and having a thin frame is a desire among these customers.This Horlicks proves that segmentation could be a very efficient way of holding on and evenincreasing one's market share. What is needed is a clear focus and clever innovations in adapting

Vodafone joins 4G race, launch in DecemberVodafone 4G will be available in Mumbai, Delhi, Kolkata,Bengaluru and Kochi by 2015-end.The mobile telephony market is set to sizzle with competition, with Vodafone India, thecountry’s second largest mobile operator by revenue and subscriber base, also joining the racefor launch of 4G services by the end of the current calendar year. Rival Bharti Airtel launchedsuch services across 300 cities earlier this month and Mukesh Ambani’s Reliance Jio Infocommplans to do so in December. Idea Cellular has already said it will launch 4G services in the nextcalendar year. On Friday, Vodafone India said it will launch 4G services by the end of calendaryear 2015 in important data markets, including Mumbai, Delhi, Kolkata, Bengaluru and Kochi.“In addition, Vodafone India will also roll out its 3G networks in seven circles – Assam, NorthEast, UP West, Rajasthan, Karnataka, Kerala and Odisha, to expand its overall 3G footprint to 16circles across the country,” a company statement said. It said the company had acquiredadditional 4G (LTE) spectrum in Mumbai, Delhi, Kolkata, Kerala and Karnataka circles in theFebruary 2014 auctions, and they together contribute close to 50% of total data revenue for it.With big operators getting into the 4G space, which enables surfing the web on mobile phones,tablets and laptops much faster than 3G services, consumers can once again expect to get the bestin terms of tariff, data packages, movies and song downloads coupled with snazzy devices, as theoperators jostle for a share of their wallet. For a sneak preview of what the consumers could get:Airtel, has a tariff plan – Infinity Plans – where at Rs 999 the company is offering unlimited

local voice calls on Airtel-to-Airtel network along with 3GB data benefits and access to WynkMovies and Wynk Music. This gets scaled up to Rs 1,999, wherein 7GB of data comes withunlimited local, STD calls, and free roaming services with unlimited Wynk songs and movies –See more at: #sthash.GC31fSRn.dpuf

Effective segmentation and positioning - Horlicks Growing up is a pain. You romance about it only after you are totally grown up. One of the exciting things about growing up was falling ill. But falling ill is a double edged weapon. You could skip school but you could get l

Modeling the Background for Incremental Learning in Semantic Segmentation