Lateral Dynamics Of A Bicycle With Passive Rider Model 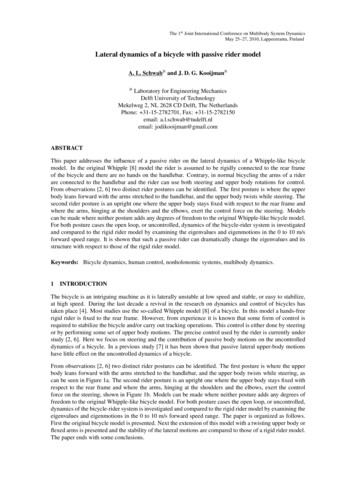 (a) Rider A on the Stratos bicycle(b) Rider A on the Browser bicycleFigure 1: Bicycling on a treadmill, two distinct postures: a) Rider A on the Stratos bicycle with forwardleaned body and stretched arms. b) Rider A on the Browser bicycle with an upright body and flexed arms.2 BICYCLE MODELThe basic bicycle model used is the so-called Whipple [8] model which recently has been benchmarked [4].The model, see Figure 2, consists of four rigid bodies connected by revolute joints. The contact between theknife-edge wheels and the flat level surface is modelled by holonomic constraints in the normal directionand by non-holonomic constraints in the longitudinal and lateral direction. In this original model it isassumed that the rider is rigidly attached to the rear frame and has no hands on the handlebar. The resultingnon-holonomic mechanical model has three velocity degrees of freedom: forward speed v, lean rate ϕ̇ andsteering rate δ̇.For the stability analysis of the lateral motions we consider the linearized equations of motion for smallperturbations about the upright steady forward motion. These linearized equations of motion are fullydescribed in Meijaard 2007 [4]. They are expressed in terms of small changes in the lateral degrees offront frame (fork andHandlebar), Hrear frame includingrider Body, BRear wheel, RFront wheel, FλPzwQcxsteer axisFigure 2: The bicycle model: four rigid bodies (rear wheel R, rear frame B, front handlebar assembly H,front wheel F) connected by three revolute joints (rear hub, steering axis, front hub), together with thecoordinate system, and the degrees of freedom.

freedom (the rear frame roll angle, ϕ, and the steering angle, δ) from the upright straight ahead configuration(ϕ, δ) (0, 0), at a forward speed v, and have the formMq̈ vC1 q̇ [gK0 v 2 K2 ]q f ,T(1)Twhere the time-varying variables are q [ϕ, δ] and the lean and steering torques f [Tϕ , Tδ ] . Thecoefficients in this equation are: a constant symmetric mass matrix, M, a damping-like (there is no realdamping) matrix, vC1 , which is linear in the forward speed v, and a stiffness matrix which is the sum ofa constant symmetric part, gK0 , and a part, v 2 K2 , which is quadratic in the forward speed. The forces onthe right-hand side, f , are the applied forces which are energetically dual to the degrees of freedom q.The entries in the constant coefficient matrices M, C1 , K0 , and K2 can be calculated from a non-minimalset of 25 bicycle parameters as described in Meijaard 2007 [4]. A procedure for measuring these parametersfor a real bicycle is described in [3], where measured values for the bicycles used in this study can be foundin Table 2. Then, with the coefficient matrices the characteristic equation,()det Mλ2 vC1 λ gK0 v 2 K2 0,(2)can be formed and the eigenvalues, λ, can be calculated. These eigenvalues, in the forward speed rangeof 0 v 10 m/s, are presented for example for the Stratos bicycle with a rigid rider in Figure 4a. Inprinciple there are up to four eigenmodes, where oscillatory eigenmodes come in pairs. Two are significantand are traditionally called the capsize mode and weave mode. The capsize mode corresponds to a realeigenvalue with eigenvector dominated by lean: when unstable, the bicycle just falls over like a capsizingship. The weave mode is an oscillatory motion in which the bicycle sways about the headed direction. Thethird remaining eigenmode is the overall stable castering mode, like in a caster wheel, which correspondsto a large negative real eigenvalue with eigenvector dominated by steering.At near-zero speeds, typically 0 v 0.5 m/s, there are two pairs of real eigenvalues. Each pair consistsof a positive and a negative eigenvalue and corresponds to an inverted-pendulum-like falling of the bicycle.The positive root in each pair corresponds to falling, whereas the negative root corresponds to the timereversal of this falling. When speed is increased two real eigenvalues coalesce and then split to form acomplex conjugate pair; this is where the oscillatory weave motion emerges. At first this motion is unstablebut at vw 4.7 m/s, the weave speed, these eigenvalues cross the imaginary axis in a Hopf bifurcationand this mode becomes stable. At a higher speed the capsize eigenvalue crosses the origin in a pitchforkbifurcation at vc 7.9 m/s, the capsize speed, and the bicycle becomes mildly unstable. The speed range forwhich the uncontrolled bicycle shows asymptotically stable behaviour, with all eigenvalues having negativereal parts, is vw v vc .3 PASSIVE RIDER MODELSThe original Whipple model can be extended with a passive rider. From observations where riding on a largetreadmill (3 5 m) [2, 6], two distinct postures emerged which will be moddeled. In the first posture modelthe upper body is leaned forward and the arms are stretched and connected to the handlebar whereas theupper body is allowed to twist, see Figure 3a. The second posture model has a rigid upper body connected tothe rear frame and hinged arms at the shoulder and elbow connected to the handlebar, see Figure 3b. Neithermodel adds any extra degree of freedom to the original Whipple model. This means that the number andstructure of the linearized equations of motion (1) stays the same, only the entries in the matrices change.For the modelling of the geometry and mass properties of the rider, the method as described by Moore et al.2009 [5] is used. Here the human rider is divided into a number of simple geometric objects like cylinders,blocks and a sphere of constant density see Figure 6a. Then with the proper dimensions and the estimatesof the individual body part masses the mechanical models can be made. For rider A used in this study thisdata can be found in Table 3, whereas the calculation of the necessary skeleton points is given in Table 4.The geometry and mass properties of the two bicycles used in this study where measured by the procedureas described in [3] and the results are presented in Table 2.The complete model of the bicycle with passive rider was analyzed with the multibody dynamics softwarepackage SPACAR [1]. SPACAR handles systems of rigid and flexible bodies connected by various joints

(a) Forward leaned rider, stretched arms.(b) Upright rider, flexed arms.Figure 3: Two distinct bicycle models which include a passive rider: a) Rider with forward leaned body andstretched arms. b) Rider with upright body and flexed arms.in both open and closed kinematic loops, and where parts may have rolling contact. SPACAR generatesnumerically, and solves, full non-linear dynamics equations using minimal coordinates (constraints areeliminated). SPACAR can also find the numeric coefficients for the linearized equations of motion based ona semi-analytic linearization of the non-linear equations. This technique has been used here to generate theconstant coefficient matrices M, C1 , K0 , and K2 from the linearized equations of motion (1) which serveas a basis for generating the eigenvalues of the lateral motions in the desired forward speed range.3.1 FORWARD LEANED PASSIVE RIDERIn this posture model the upper body is leaned forward and the arms are stretched and connected to thehandlebar, see Figure 3a. The leaned upper body is allowed to twist about its longitudinal axis when steered.The upper body also needs a pitching degree of freedom but in a first order approximation the pitchingmotions is zero. This also follows directly from symmetry arguments. The linearized equations of motionare derived as described above together with the eigenvalues of the lateral motions. These eigenvalues areshown in Figure 4b. For comparison the eigenvalues for a rigid rider, that is the rider is rigidly attached tothe rear frame and there are no hands on the handlebar, are shown in Figure 4a.Compared to the rigid rider solutions there are some small changes in the eigenvalues but the overall structure is still the same. Most noticeable is that the stable speed range goes up and the the frequency of theweave motion goes down. This can be explained as follows. Adding this passive rider model makes twomajor changes to a fully rigid rider model. The first is that the attached passive mechanism of arms andtwisting upper body adds a mass moment of inertia to the steering assembly. Looking at the entries in themass matrix this increases the diagonal mass term M (2, 2) for the steering degree of freedom δ, from 0.25kgm2 to 0.69 kgm2 . The off-diagonal terms increase slightly. The effect on the eigenvalues is that theadded mass increases the weave speed and decreases the weave frequencies overall. The second changeis the added stiffness to the steering assembly due to the compression forces exerted by the hands on thehandlebar when leaning forward. This effects more entries in the matrices of the linearized equations ofwhich the most noticeable are the changes in the constant symmetric stiffness matrix K0 . The diagonalterm for the steering stiffness, K0 (2, 2), increases from 6.8 Nm/rad to 3.2 Nm/rad and the off-diagonalterms decrease by 50 %. The effect on the eigenvalues of this increased stiffness is an increased capsizespeed and an overall increase of weave frequencies. However the two effects together, result in little changecompared to the rigid rider model as described above. It should also be noted that the more the direction of

oscillator stabilizes the initial unstable weave motion it kills the stable eigen-dynamics of the bicycle. Thesteer assembly is not able to stabilize the lateral motion by the steer-into-the fall mechanism. The addedmass is most noticeable in the diagonal steering related term M (2, 2) which increases from 0.25 kgm2 to0.46 kgm2 . More dramatic is the change in the constant symmetric stiffness matrix K0 , here the steeringrelated stiffness K0 (2, 2) increase from an unstable 6.6 Nm/rad to a stable 2.3 Nm/rad, which partlyexplains the dramatic change in the eigenvalue structure.4 CONCLUSIONSAdding a passive upper body to the three degree of freedom Whipple model of an uncontrolled bicycle,without adding any extra degrees of freedom, can change the open-loop dynamics of the system. In the caseof a forward leaned rider with stretched arms and hands on the handle bars there is little change. However,an upright rider position with flexed arms and hands on the handle bars changes the open-loop dynamicsdrastically and ruins the self stability of the system.Future work is direct towards the comparison of the control effort of the human rider in both postures.ACKNOWLEDGEMENTThanks to Jason Moore for measuring the bicycles and riders during his Fulbright granted year (2008/2009)at TUDelft and thanks to Batavus for supplying the bicycles.REFERENCES[1] J ONKER , J. B., AND M EIJAARD , J. P. SPACAR - Computer program for dynamic analysis of flexiblespatial mechanisms and manipulators. In Multibody systems handbook (1990), W. Schiehlen, Ed.,Berlin, Germany: Springer, pp. 123–143.[2] KOOIJMAN , J. D. G., AND S CHWAB , A. L. Some observations on human control of a bicycle. In 11thmini Conference on Vehicle System Dynamics, Identification and Anomalies (VSDIA2008), Budapest,Hungary (Nov. 2008), I. Zobory, Ed., Budapest University of Technology and Economics, p. 8.[3] KOOIJMAN , J. D. G., S CHWAB , A. L., AND M EIJAARD , J. P. Experimental validation of a model ofan uncontrolled bicycle. Multibody System Dynamics 19 (2008), 115–132.[4] M EIJAARD , J. P., PAPADOPOULOS , J. M., RUINA , A., AND S CHWAB , A. L. Linearized dynamicsequations for the balance and steer of a bicycle: a benchmark and review. Proceedings of the RoyalSociety A 463 (2007), 1955–1982.[5] M OORE , J. K., H UBBARD , M., KOOIJMAN , J. D. G., AND S CHWAB , A. L. A method for estimatingphysical properties of a combined bicycle and rider. In Proceedings of the ASME 2009 InternationalDesign Engineering Technical Conferences & Computers and Information in Engineering Conference(DETC2009, Aug 30 – Sep 2, 2009, San Diego, CA, 2009).[6] M OORE , J. K., KOOIJMAN , J. D. G., AND S CHWAB , A. L. Rider motion identification during normalbicycling by means of principal component analysis. In MULTIBODY DYNAMICS 2009, ECCOMASThematic Conference (29 June–2 July 2009, Warsaw, Poland, 2009), M. W. K. Arczewski, J. Fraczek,Ed.[7] S CHWAB , A. L., KOOIJMAN , J. D. G., AND M EIJAARD , J. P. Some recent developments in bicycledynamics and control. In Fourth European Conference on Structural Control (4ECSC) (2008), A. K.Belyaev and D. A. Indeitsev, Eds., Institute of Problems in Mechanical Engineering, Russian Academyof Sciences, pp. 695–702.[8] W HIPPLE , F. J. W. The stability of the motion of a bicycle. Quarterly Journal of Pure and AppliedMathematics 30 (1899), 312–348.

Analysis on the lateral vibration of . - Copernicus

bicycle parking for each 20 students of planned capacity .