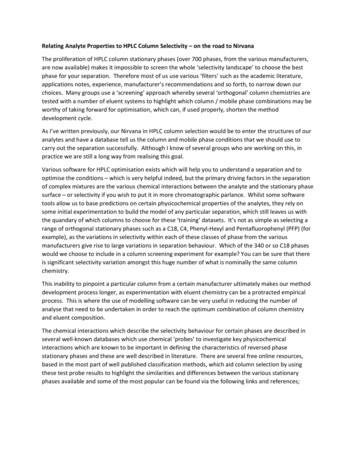 Relating Analyte Properties to HPLC Column Selectivity – on the road to NirvanaThe proliferation of HPLC column stationary phases (over 700 phases, from the various manufacturers,are now available) makes it impossible to screen the whole ‘selectivity landscape’ to choose the bestphase for your separation. Therefore most of us use various ‘filters’ such as the academic literature,applications notes, experience, manufacturer’s recommendations and so forth, to narrow down ourchoices. Many groups use a ‘screening’ approach whereby several ‘orthogonal’ column chemistries aretested with a number of eluent systems to highlight which column / mobile phase combinations may beworthy of taking forward for optimisation, which can, if used properly, shorten the methoddevelopment cycle.As I’ve written previously, our Nirvana in HPLC column selection would be to enter the structures of ouranalytes and have a database tell us the column and mobile phase conditions that we should use tocarry out the separation successfully. Although I know of several groups who are working on this, inpractice we are still a long way from realising this goal.Various software for HPLC optimisation exists which will help you to understand a separation and tooptimise the conditions – which is very helpful indeed, but the primary driving factors in the separationof complex mixtures are the various chemical interactions between the analyte and the stationary phasesurface – or selectivity if you wish to put it in more chromatographic parlance. Whilst some softwaretools allow us to base predictions on certain physicochemical properties of the analytes, they rely onsome initial experimentation to build the model of any particular separation, which still leaves us withthe quandary of which columns to choose for these ‘training’ datasets. It’s not as simple as selecting arange of orthogonal stationary phases such as a C18, C4, Phenyl-Hexyl and Pentafluorophenyl (PFP) (forexample), as the variations in selectivity within each of these classes of phase from the variousmanufacturers give rise to large variations in separation behaviour. Which of the 340 or so C18 phaseswould we choose to include in a column screening experiment for example? You can be sure that thereis significant selectivity variation amongst this huge number of what is nominally the same columnchemistry.This inability to pinpoint a particular column from a certain manufacturer ultimately makes our methoddevelopment process longer, as experimentation with eluent chemistry can be a protracted empiricalprocess. This is where the use of modelling software can be very useful in reducing the number ofanalyse that need to be undertaken in order to reach the optimum combination of column chemistryand eluent composition.The chemical interactions which describe the selectivity behaviour for certain phases are described inseveral well-known databases which use chemical ‘probes’ to investigate key physicochemicalinteractions which are known to be important in defining the characteristics of reversed phasestationary phases and these are well described in literature. There are several free online resources,based in the most part of well published classification methods, which aid column selection by usingthese test probe results to highlight the similarities and differences between the various stationaryphases available and some of the most popular can be found via the following links and references;

ACD Labs Column Selection Database — based on the early work of Tanaka and developed byEuerby and Peterson chromproc/index.php#colsel United States Pharmacopeial Convention (USP) database — based on test probes establishedusing a National Institute of Standards and Technology (NIST) Standard Reference material,http://www.usp.org/USPNF/columnsDB.html The Impurities Working Group of the Product Quality Research Institute (PQRI) Drug SubstanceTechnical Committee — uses probes based on the hydrophobic subtraction model of Dolan,Snyder, and Carr (5–8), http://www.usp.org/USPNF/columnsDB.html Dr Dwight Stoll (Gustavus Adolphus College, MN, USA) - http://www.hplccolumns.org/These resources can be very helpful in narrowing column choice, but the fact remains that we still needto have some innate ability or sufficient experience to identify which of the phase characteristics will beimportant for a particular separation and, as there are several descriptors which play an important rolein defining selectivity, this is not straightforward for even experienced chromatographers.So, we need a way to simplify and codify the relationship between the properties of our analytes andthe selectivity descriptors which are currently available in order to quickly highlight which columnsmight work best for our separations – a half way point, if you like, towards the Nirvana I describedearlier. This will significantly aid column choice for less experienced chromatographer and perhapswiden the horizons of the more experienced who have become entrenched with a particular phasechemistry or manufacturer.I’ve written about the usefulness of the Hydrophobic Subtraction Mode [ ] for the classification ofstationary phases which uses hydrophobicity, steric (shape) selectivity, acidity, basicity and electrostaticnature to classify stationary phases. Whilst useful, the problem as always is making the link betweenthe characteristics of the stationary phase the chemistry of the analytes we wish to separate. Asdescribed above, this is the weak point in any of the modern column selection systems.However, one online resource (www.hplccolumns.org) has provided a particularly useful resource tohelp visualise the individual and comparative column characteristics which is amongst the best we haveseen at aiding column selection and understanding the differences between stationary phases and thelink between column and analyte characteristics.In Figure 1 I’ve represented some of the fundamental interactions between analytes and stationaryphases according the Hydrophobic Subtraction model.

Figure 1: Various types of interaction that are currently included in the databases of columncharacteristics. Interaction terms are explained below and analyte numbers refer to the chromatogramsshown later in Figure 4.In summary;H –hydrophobic interactionB – stationary phase hydrogen bond basicity (the ability of the phase to hydrogen bond with acidicanalytes) (note: mechanism is not well understood but may be due to a layer of sorbed water at thesilica surface, embedded metal ions etc.)A - stationary phase hydrogen bond acidity (the ability of the phase to hydrogen bond with basicanalytes)S – steric / shape selectivity which describes the ability of the stationary phase to discriminate on thebasis of analyte size / shapeC – electrostatic interactions between ionised groups of the analyte and deprotonated silanol groups onthe silica surface (note: repulsive effects with acidic analytes are also possibleIt should be noted that there are no formal descriptors in the database for – interactions which areimportant in a number of modern stationary phases such phenyl and pentafluorophenyl phases.It should be obvious that it would be difficult to form an ab.inito. opinion on which of these dominantinteractions will play the major role in the selectivity for a given analyte or analytes.However, it is possible to make some broad generalisations regarding the interactions of differentanalyte types. For example, the interactions of small ionised basic analytes may be dominated by theterms S, A and C. Whilst for small ionised acids it may be S, B and C. For polar neutrals it may be S, A

and B and for analytes containing acidic and basic functional groups the dominant interactions may beA, B and C.To easily represent these interactions for a range of different columns, one may reduce each of theseparameters (S, A, B and C) by H (the hydrophobic interaction) and display the various phases underconsideration using a three dimensional representation.Figure 2 shows these various parameters for the columns available from the manufacturer YMC. In eachcase the black sphere shows the Triart C18 column and the Triart Phenyl column has been highlighted ineach case to show how one might compare the selectivity characteristics for small ionisable acidicmolecules (SBC), small polar neutrals (SAB), mixtures of ionisable acids and bases or zwitterions (ABC)and small ionisable basic analytes (SAC). In this way columns may be usefully compared in order topredict the selectivity differences between the various stationary phases when dealing with analytes inbroad chemical classifications.

Figure 2: Demonstration of the use of 3D models to identify the selectivity characteristics of the YMCTriart Phenyl column grouped by various parameters which are expected to dominate for various broadanalyte classifications.

Figure 3: Demonstration of the use of 3D models to compare the selectivity of a range of YMC Triartcolumn stationary phases with analytes of different broad classification

Figure 3 shows a similar investigation for small basic analytes on various YMC Triart Stationary phases –that is, examining the various column selectivity’s when dealing with a particular analyte classification.It should be noted that the colour coding and Fs values show the column similarity according theHydrophobic Interaction Model scaling system.From Figure 3 we can see the various differences in selectivity between the Triart C18 column and theother phases available in this column range when analysing small ionisable basic compounds. It shouldbe noted that the 3D models can be rotated to aid the comparison of the columns according to eachparameter which is being plotted.Figure 4 shows the separation of such analytes as well as a range of other analytes which we willinterpret below.YMC Triart C18YMC Triart C81.2.3.4.5.6.YMC Triart PhenylAmitriptyline (basic compound)8-Quinolol (coordination compound)Testosterone (polar compound)Napthalene ( ) interactionIbuprofen (acidic compound)Propyl benzene (hydrophobiccompound)7. n-butylbenzene (hydrophobiccompound)8. o-Terphenyl (shape selectivity probe)9. Triphenylene (shape selectivity probe)YMC Triart Pentafluorophenyl

Figure 4: Separations of a number of test probe compounds, useful in providing correlation betweenexperimental data and information from column selectivity characteristics databases.As a broad interpretation from Figures 3 and 4, for small ionisable basic analytes, one might expectlower interactions due to hydrogen bond and electrostatic interactions (separation between analytes 1and 3) and altered shape selectivity (analytes 8,9) for Triart C8 versus Triart C18.From the 3D plots of column SAC measurements, we would expect increased interactions with ionisedanalytes compared to non-ionised analytes when comparing Triart C18 columns to Triart Phenylcolumns (analytes 1,3). Further, the Phenyl column should show different shape selectivity (analyte pair8, 9).Based on the large differences between A and C values, the pentafluorophenyl phase will show distinctlydifferent interactions (selectivity) between ionised and non-ionised analytes compared to the C18 phase(analytes 1,3) and enhanced (or significantly different) shape selectivity characteristics (analytes 8,9).From the 3d plots, one might expect decreasing retention for acidic analytes (as defined by lower B andC values) as we move from C18 to C8 and from Phenyl to PFP phases which is borne out by the retentionof compound 5.Whilst the 3D plots are not currently able to show the selectivity differences due to the degree of interaction between the analyte and stationary phase, it is recognised that the extent of interactionchanges in the order PFP Phenyl Alkyl, which again is broadly borne out by the behaviour of compound4 in Figure 4.In summary, a useful method for comparing relative column selectivity for broad analyte categories hasbeen demonstrated and it is this ability to correlate various column selectivity characteristics with thebroad analyte classification via the use of 3D box plots for SAC, SBC etc. which is particularly useful as ithighlights important selectivity drivers for the analyte classification. Whilst this is still not the ‘Nirvana’of choosing the correct column for our separation, it does deliver some of the benefits of codification ofthe relationships between column and analyte characteristics and has, in our hands, proved to be veryuseful for column selection and comparison and to help rationalise the result of method developmentexperiments.(1) K. Kimata, K. Iwaguchi, S. Onishi, K. Jinno, R. Eksteen, K. Hosoya, M. Arki, and N. Tanaka, J.Chromatogr. Sci. 27, 721 (1989).(2) M.R. Euerby and P. Petersson, J. Chromatogr. A 994, 13–36 (2003).(3) M.R. Euerby and P. Petersson, J. Chromatogr. A 1088, 1–15 (2005).(4) M.R. Euerby and P. Petersson, J. Chromatogr. A 1154, 138–151 (2007).(5) N.S. Wilson, M.D. Nelson, J.W. Dolan, L.R. Snyder, R.G. Wolcott, and P.W. Carr, J. Chromatogr. A 961,171–193 (2002).(6) J.W. Dolan, A. Maule, D. Bingley, L. Wrisley, C.C. Chand, M. Angod, C. Lunte, R. Krisko, J.M. Winston,B.A. Homeier, D.V. McCalley, and L.R. Snyder, J. Chromatogr. A 1057, 59–74 (2004).

Relating Analyte Properties to HPLC Column Selectivity – on the road to Nirvana The proliferation of HPLC column stationary phases (over 700 phases, from the various manufacturers, are now available) makes it impossible to screen the whole ‘selectivity

Identification of Sildenafil (Viagra ) and Its Metabolite (UK

The LC/MS Quantitation of Vardenafil (Levitra ) in

Analyzing Cleaning and Personal Care Products by Gas and .