The 340B Drug Pricing Program - ACHP 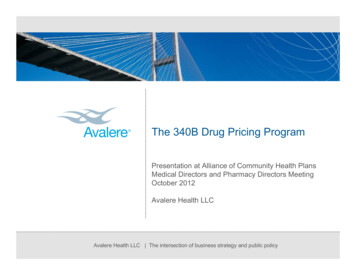 Eric Hammelman Eric Hammelman, CFA, Vice President, provides data-driven analysis of the impact ofpayment policies on healthcare patterns. He helps clients across multiple sectorsunderstand how data can better inform their business strategies, including responding toemerging trends such as medical homes and Accountable Care Organizations, or shapingnew payment policies including payment bundles. Eric has experience working with a wide range of datasets to understand the best optionfor each particular assignment, including Medicare, Medicaid, commercial, or other surveybased data. He has a special interest in provider payment, and is a regular speaker atprovider conferences to discuss how payment reform may impact provider performance inthe years to come. Prior to joining Avalere, Eric was an Associate Analyst with JPMorgan, where he analyzedhealthcare service companies and provided investment advice to institutional investors. Healso analyzed payment policies for each of these areas, including Medicare, Medicaid, andprivate payers. Eric has a Bachelors of Music Performance from the University of Illinois at UrbanaChampaign. He also earned an M.B.A. from the Marshall School of Business (University ofSouthern California), as well as a Masters of Music Performance from the Mannes Collegeof Music in New York, N.Y. Eric is a CFA charterholder. Avalere Health LLCPage 3

340B Program OverviewThe intersection of businessstrategy and public policy

The 340B Drug Pricing Program has Been Providing SafetyNet Providers With Access to Discounted Drugs for 20 Years Section 340B of the Public Health Service Act mandates manufacturer discounts onoutpatient drugs for certain safety-net providers» Since 1992 all manufacturers participating in Medicaid and/or Medicare Part B have been requiredto offer 340B discounts» Facilities that qualify for discounts are called ‘covered entities’» On average, covered entities can save 20% to 50% on the cost of outpatient drugs» Program is administered by the Health Resources and Services Administration (HRSA) Office ofPharmacy Affairs (OPA) Drugs purchased under 340B are intended only for ‘patients’ of the covered entity Entities without an in-house pharmacy of their own may:» Use outside contract pharmacies as a dispensing agents (“ship to / bill to”) and/or» Pay manufacturers directlyThe entity is eligible for 340B discounts rather than the patient. Entities mayaccess 340B pricing on outpatient drugs for all their patients, regardless of theirinsurance status** For Medicaid there is a prohibition against double rebates, i.e., the drug may not be subject to 340B pricing and aMedicaid rebate Avalere Health LLCPage 6

The Affordable Care Act Made new Categories of HospitalsEligible for 340B Discounts Effective January 1, 2010, the Affordable Care Act (ACA) expanded 340B eligibility toadditional categories of hospitals, including:» Children’s hospitals (DSH 11.75%)–Children’s hospitals were previously included under the Deficit Reduction Act of 2005 (DRA);ACA clarified eligibility» Freestanding cancer hospitals (DSH 11.75%)» Sole community hospitals (DSH 8%)» Rural referral centers (DSH 8%)» Critical access hospitals (No DSH requirement) Orphan drugs are excluded from 340B discounts for those new hospital categories» In May 2011, HRSA released the proposed rule that allows new categories of eligible entities tobuy orphan drugs at 340B prices but only for non-orphan uses» Comments to the rule were due July 2011; release date of the final rule is unknown Avalere Health LLCPage 8

340B Entities Save on Average 20-50 Percent on OutpatientDrug Costs Entities participating in 340B purchase drugs at or below a ceiling price defined in the340B statute The ceiling price equals the net Medicaid price which is the lower of:» Average Manufacturer Price (AMP) minus 23.1% for brand name drugs (13% for generic and overthe-counter drugs)*» Manufacturer’s best price - the lowest price available to any wholesaler, retailer, provider, healthmaintenance organization, nonprofit entity, or the government The amount owed by manufacturers due to the Medicaid inflation penalty, if AMP hasincreased over the consumer price index, is subtracted from the ceiling price The Prime Vendor Program (PVP) managed by Apexus helps 340B entities improveaccess to affordable medications by negotiating sub-ceiling prices with manufacturers» The PVP is free and majority of covered entities participate in the program» The PVP reports offering drugs at prices about 12 percent below the ceiling price (resulting in a340B price of 35 percent below the AMP)*** For products with a pediatric indications and for certain blood clotting factors the rebate is set at 17.1 percent of AMP** Presentation by Chris Hatwig, Vice President, of Apexus at the 340B Coalition Conference, July 11-13, 2011,Washington, DC Avalere Health LLCPage 11

Manufacturers Are Not Subject to 340B Discounts andMedicaid Rebates Every 340B entity that serves a Medicaid population selects if it is going to use 340Bpurchased drugs to fill prescriptions for Medicaid patients (carve-in) or purchase drugs forthis population outside of the 340B program (carve-out)» About half of 340B sites use 340B-purchased outpatient drugs for their Medicaid patients» Entities that choose to carve-out provide HRSA with their pharmacy Medicaid provider number,which is placed in the Medicaid Exclusion File available to State Medicaid agencies If a 340B entity chooses to dispense 340B-purchased drugs to Medicaid patients, it isreimbursed at the actual drug acquisition cost plus a dispensing fee, effectively passingtheir 340B discounts to the State If a 340B entity chooses to carve-out Medicaid patients, it is reimbursed at the ratesestablished by the State Medicaid agency for retail pharmacies (AWP minus a discountplus a dispensing fee)* OIG Report, State Medicaid Policies and Oversight Activities Related to 340B-Purchased Drugs, June 2011 Avalere Health LLCPage 12

Only Patients of a 340B Entity Can Receive DiscountedDrugs; Patient Definition is Unclear Issues have been raised around certain “grey” areas, including:» Employees of 340B entities, prisoners, and other state populations (e.g. mental health population) Who can be considered a patient and when?» Records maintenance requirement (e.g. addressing electronic health records and 340B entities thatare not a primary place of care)» Contractual or other arrangement requirement for the provider of services (e.g. what does it meanto be an “integral part” of the hospital? Can patients of the 340B entity referred somewhere else forcare still be able to access discounted drugs?)» Responsibility of care requirement (e.g. addressing integrated care organizations) New patient definition is expected to be proposed by HRSA at any time» The OMB review of the HRSA’s notice was completed in April 2011** Notice Regarding Section 602 of the Veterans Health Care Act of 1992 Definition of “Patient” Avalere Health LLCPage 15

Recent 340B Policy Releases Demonstrate HRSA Efforts toClarify Pertinent Issues for Program StakeholdersOn May 23, 2012, HRSA has posted new policy releases to their website: The Accountable Care Organizations (ACO) policy clarifies 340B eligibility within ACOs bystating that inclusion of a covered entity within an ACO» Does not make the entire ACO and individual entities that are a part of an ACO eligible for receivingdiscounted drugs under the 340B program‒Each entity that is a part of an ACO must individually satisfy the 340B eligibility requirements tobe able to access discounted drugs‒A covered entity that is a part of an ACO is prohibited from transferring drugs to non-340Bentities and their patients, including those which are part of an ACO» Does not make all of the individuals receiving services from an ACO patients of the covered entityfor 340B purposes Clarification of Non-Discrimination policy restates HRSA views on manufacturer alternateallocation procedures when the supply of a covered outpatient drug is not adequate tomeet market demands. Manufacturers must:» Demonstrate that 340B providers are treated the same as non-340B providers» Provide a written notification to HRSA at least 4 weeks before the implementation ofrestricted distributionSource: ACO policy release, http://www.hrsa.gov/opa/Docs/ACO policy release.pdfClarification of Non-Discrimination policy rimination2.pdf Avalere Health LLCPage 18

Several Outstanding Policy Issues Need to Be AddressedRegarding the 340B Program IntegrityDefinition of Patient Multiple stakeholders have raised concerns regarding the current patient definition thathas many “grey areas” allowing for different interpretations that may lead to diversion HRSA issued a proposed regulation to tighten the definition of patient in 2007 but neverfinalized the rule New patient definition regulation is expected; OMB completed the review of the HRSA’snew notice in April 2011Orphan Drugs Exclusion Majority of 340B entities can buy orphan drugs at 340B prices Only new categories of eligible entities per ACA are excluded; however, the proposedrule would allow them to buy orphan drugs at 340B prices for non-orphan indicationsContracts with Multiple Pharmacies to Dispense 340B Drugs Since April 2010, 340B entities are allowed to contract with multiple outside pharmacies» This creates better drug access for patients but also greater risk of non-complianceand potential diversion Avalere Health LLCPage 19

Medicaid Managed Care Implications The ACA exempted drugs purchased under the 340B program from the new Medicaidmanaged care reporting requirement» This provision essentially allows 340B entities to purchase and use 340B drugs for Medicaid MCOpatients» The provision is silent on Medicaid MCOs ability to obtain discounts for these same drugs» Some Medicaid MCOs work with 340B entities to capture some of the lower pricing MCOs need to be able to differentiate between prescription claims for 340B drugs andthose for non-340B drugs in order to correctly report data to the State» Most 340B dispensing pharmacies do not know whether a patient is eligible for a 340B drug whenthe prescription is filled» States are working with Medicaid MCOs to determine the best method for identifying 340B-eligibleclaims to prevent the mandatory Medicaid rebate For new Medicaid MCO pharmacy contracts, it is unclear if States are adjusting theproposed capitation rates to account for 340B provisions» If 340B entities were not carving-out their 340B patients and the State was paying them at the 340Bprice, capitation rates may reflect discounts unavailable to the Medicaid MCO Avalere Health LLCPage 20

Continuing Education QuestionsQuestion 1: For-profit hospitals are permitted to participate in the 340B program.a) Trueb) FalseQuestion 2: 340B-enrolled acute-care hospitals receive what statutorily-minimum discount when purchasing drugs foruse in the inpatient setting?a) 15.1%b) 23.1%c) 33%d) No discount for drugs used in the inpatient settingQuestion 3: Drug manufactures are required to participate in the 340B program if they also participate in the Medicaidprogram.a) Trueb) FalseQuestion 4: A 340B-enrolled entity may provide drugs purchased under the 340B program to which types of patients?a) Commercially-insured individualsb) Medicare-insured individualsc) Uninsured individualsd) Any individual seen in the outpatient setting that meets the definition of a covered patientQuestion 5: A 340B-enrolled hospital may only have one contracted pharmacy.a) Trueb) False Avalere Health LLCPage 22

A Comprehensive Review of the Federal 340B Drug

What, When and Why: Designing a 340B Self-Audit

Public may follow the meeting via the following link https .