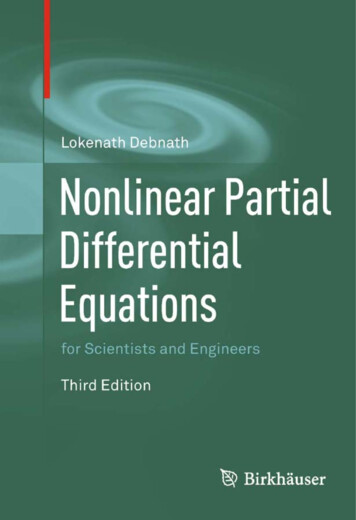 TO MY MOTHERwith love, gratitude, and admiration

True Laws of Nature cannot be linear.Albert Einstein. . . the progress of physics will to a large extent depend on the progressof nonlinear mathematics, of methods to solve nonlinear equations . . . andtherefore we can learn by comparing different nonlinear problems.Werner HeisenbergOur present analytical methods seem unsuitable for the solution of the important problems arising in connection with nonlinear partial differentialequations and, in fact, with virtually all types of nonlinear problems in puremathematics. The truth of this statement is particularly striking in the fieldof fluid dynamics. . . .John Von NeumannHowever varied may be the imagination of man, nature is a thousand timesricher, . . . Each of the theories of physics . . . presents (partial differential)equations under a new aspect . . . without these theories, we should not knowpartial differential equations.Henri PoincaréSince a general solution must be judged impossible from want of analysis,we must be content with the knowledge of some special cases, and that allthe more, since the development of various cases seems to be the only wayto bringing us at last to a more perfect knowledge.Leonard Euler. . . as Sir Cyril Hinshelwood has observed . . . fluid dynamicists were divided into hydraulic engineers who observed things that could not be explained and mathematicians who explained things that could not be observed.James Lighthill

Preface to the Third EditionA teacher can never truly teach unless he is still learning himself. A lampcan never light another lamp unless it continues to burn its own flame. Theteacher who has come to the end of his subject, who has no living traffic withhis knowledge but merely repeats his lessons to his students, can only loadtheir minds; he cannot quicken them.Rabindranath TagoreAn Indian Poet1913 Nobel Prize Winner for LiteratureThe previous two editions of my book were very well received and used as a senior undergraduate or graduate-level text and research reference in the United Statesand abroad for many years. We received many comments and suggestions from manystudents, faculty, and researchers around the world. These comments and criticismshave been very helpful, beneficial, and encouraging. This third edition is the resultof the input.Another reason for adding this third edition to the literature is the fact that therehave been major discoveries of new ideas, results and methods for the solutions ofnonlinear partial differential equations in the second half of the twentieth century.It is becoming even more desirable for mathematicians, scientists, and engineers topursue study and research on these topics. So what has changed, and will continueto change, is the nature of the topics that are of interest in mathematics, appliedmathematics, physics, and engineering, the evolution of books such as this one is ahistory of these shifting concerns.This new and revised edition preserves the basic content and style of the secondedition published in 2005. As with the previous editions, this book has been revisedprimarily as a comprehensive text for senior undergraduates or beginning graduatestudents and a research reference for professionals in mathematics, engineering, andother applied sciences. The main goal of the book is to develop required analyticalskills on the part of the reader, rather than to focus on the importance of more abstract formulation, with full mathematical rigor. Indeed, our major emphasis is to

viiiPreface to the Third Editionprovide an accessible working knowledge of the analytical and numerical methodswith proofs required in mathematics, applied mathematics, physics, and engineering.In general, changes have been made to modernize the contents and to improve theexposition and clarity of the previous edition, to include additional topics, comments,and observations, to add many examples of applications and exercises, and in somecases to entirely rewrite and reorganize many sections. There is plenty of material inthe book for a year-long course or seminar. Some of the material need not be coveredin a course work and can be left for the readers to study on their own in order toprepare them for further study and research. This edition contains a collection of over1000 worked examples and exercises with answers and hints to selected exercises.Some of the major changes and additions include the following:1. Many sections of almost all chapters have been revised and expanded to modernize the contents. We have also taken advantage of this new edition to correcttypographical errors and to include several new figures for a clear understandingof physical explanations.2. Several nonlinear models including the Camassa–Holm (CH) equation, theDegasperis–Procesi (DP) equation, and the Toda lattice equation (TLE) havebeen presented with their physical significance in Chapter 2. Included are alsonew sections on the small-amplitude gravity-capillary waves on water of finiteand infinite depth, the energy equation and energy flux.3. A new section on the Lorenz nonlinear system, the Lorenz attractor, and deterministic chaos has been added in Chapter 6.4. Included is a new section on the Camassa–Holm equation, the Degasperis–Procesi equation, and the Euler–Poincaré (EP) equation in Chapter 9 to describethe wave breaking (singular) phenomena. A new section on the derivation of theKdV equation for the gravity-capillary wave, the gravity-capillary solitary wavesolutions, and the two-dimensional periodic flow in an inviscid, incompressiblefluid with constant vorticity has been added. Special attention is given to bothanalytical and computational solutions of these problems with physical significance.5. A new example describing nonlinear quasi-harmonic waves and modulationalinstability has been added in Chapter 10.6. The nonlinear lattices and the Toda lattice equation have been treated in somedetail at the end of Chapter 11.7. All tables of Fourier transforms, Fourier sine and cosine transforms, Laplacetransforms, Hankel transforms, and finite Hankel transforms have been revisedand expanded so that they become more useful for the study of partial differentialequations.8. In order to make the book self-contained, two new appendices on some special functions and their basic properties, Fourier series, generalized functions,Fourier and Laplace transforms have been added. Special attention has beengiven to algebraic and analytical properties of the Fourier and Laplace convolutions with applications.

Preface to the Third Editionix9. The whole section on Answers and Hints to Selected Exercises has been revisedand expanded to provide additional help to students.10. The entire bibliography has been revised and expanded to include new and current research papers and books so that it can stimulate new interest in futurestudy and research.11. The Index has been revised and reorganized to make it more useful for the reader.Some of the highlights in this edition include the following: The book offers a detailed and clear explanation of every concept and method thatis introduced, accompanied by carefully selected worked examples, with specialemphasis given to those topics in which students experience difficulty.A wide variety of modern examples of applications has been selected from areasof partial differential equations, quantum mechanics, fluid dynamics, solid mechanics, calculus of variations, linear and nonlinear wave propagation, telecommunication, soliton dynamics, and nonlinear stability analysis.The book is organized with sufficient flexibility to enable instructors to selectchapters appropriate for courses of differing lengths, emphases, and levels ofdifficulty as chapters are significantly independent of each other.A wide spectrum of exercises has been carefully chosen and included at the endof each chapter so the reader may further develop both rigorous skills in thetheory and applications of partial differential equations and a deeper insight intothe subject.Many new research papers and standard books have been added to the bibliography to stimulate new interest in future study and research. The Index of the bookhas also been completely revised in order to include a wide variety of topics.The book provides information that puts the reader at the forefront of currentresearch.With the improvements and many challenging worked out problems and exercises, we hope this edition will continue to be a useful textbook for students as well asa research reference for professionals in mathematics, applied mathematics, physics,and engineering.It is my pleasure to express our grateful thanks to many friends, colleagues, andstudents around the world who offered their suggestions and help at various stages ofthe preparation of the book. Special thanks to Mrs. Veronica Chavarria for drawingsome figures, typing the manuscript with constant changes and revisions. In spite ofthe best efforts of everyone involved, some typographical errors doubtless remain.Finally, we wish to express our special thanks to Mr. Tom Grasso, Senior Editor, andthe staff of Birkhäuser, Boston, for their help and cooperation. I also wish to thankMr. Donatas Akmanavičius and his staff for their meticulous job in preparing the finalrevised manuscript for printing the third edition. I am indebted to my wife, Sadhana,for her understanding and tolerance while the third edition was being written.Edinburgh, TexasLokenath Debnath

Preface to the Second EditionThis is a revised and expanded version of the first edition, published in 1997. Thefirst edition was well received and used as a graduate level text and research reference in the United States and abroad for the last several years. I have received manycriticisms and suggestions from graduate students and faculty members around theworld. Their suggestions for improvement have been very helpful, beneficial, and encouraging. Most of the changes have been made in response to that input. However,an attempt has been made to preserve the character of the first edition. I believe thatthis new edition will remain a major source of linear and nonlinear partial differentialequations and provide a useful working knowledge of the most important analyticalmethods of the solutions of the equations. Finding and interpreting the solutions ofthese equations is a central part of the modern applied mathematics, and a thoroughunderstanding of partial differential equations is essential for mathematicians, scientists, and engineers. The main emphasis of the book is on the development ofthe required analytical skills on the part of the reader, rather than the importance ofmore abstract formulation with full mathematical rigor. However, because the studyof partial differential equations is a subject at the forefront of current research, I havemade an effort to include many new ideas, remarkable observations, and new evolution equations as further research topics for the ambitious reader to pursue.I have taken advantage of this new edition to add some recent exciting developments of the subject, to update the bibliography and correct typographical errors,to include many new topics, examples, exercises, comments, and observations, and,in some cases, to entirely rewrite whole sections. The most significant differencefrom the first edition is the inclusion of many new sections, such as those on Sturm–Liouville (SL) systems and some major general results including eigenvalues, eigenfunctions, and completeness of SL system, energy integrals and higher dimensionalwave and diffusion equations in different coordinate systems, solutions of fractionalpartial differential equations with new examples of applications, the Euler–Lagrangevariational principle and the Hamilton variational principle with important examplesof applications, and the Hamilton–Jacobi equation and its applications. Included alsoare the Euler equation and the continuity equation, which provide the fundamentalbasis of the study of moder

Review paper on the applications of Runge- Kutta method to . - IJARIIE

User’s Manual for Interactive LINEAR, a To Derive Linear .