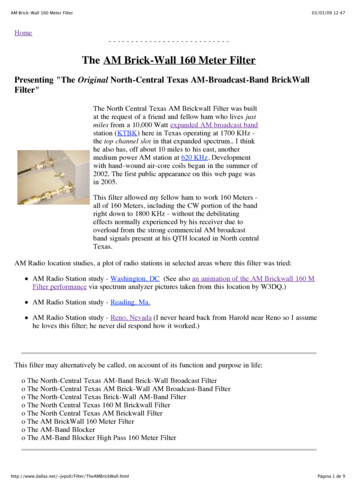 AM Brick-Wall 160 Meter FilterToroid version of prototype of the "The AMBrickWall".03/03/09 12:47Early prototype with air-core coil circa 2002.Features:Connects in-line with any 160 through 10 Meter (1.8 through 30 MHz) HF transceiver - transmitright through it on any HF ham band above 1.8 MHz!Compatible with output from a typical 100 Watt class HF transceiverThe filter is designed to be a "50 Ohm component"Suitable for inserting between a) a radio and an amplifier or b) a radio and a tunerAttenuates ALL signals in the AM broadcast - with a spec'd minimum 40 dB of attenuationbeginning at 1700 KHz (the highest allocated frequency in the expanded AM spectrum in theUSA)Reduces *all* AM Broadcast transmissions by a power reduction ratio of at least 10,000:1Effectively reduces a 10,000 Watt AM Broadcast transmission to at most 1 Watt (spec'dminimum of 40 dB of attenuation)Effectively reduces a 50,000 Watt AM Broadcast transmission to at most 5 Watts (spec'dminimum of 40 dB of attenuation)Totally passive design - Intrinsic T/R (Transmit/Receive) operationNo moving partsUses no relays (no contacts to 'get dirty')Requires no connection to a power source'Instantly' switches from transmit to receive and back again - no relay time delays to contendwithBypass switch allows quick and easy, in/out performance verification or 'checks'http://www.dallas.net/ jvpoll/Filter/TheAMBrickWall.htmlPágina 2 de 9

AM Brick-Wall 160 Meter Filter03/03/09 12:47The AM-Band BrickWall Broadcast Filter PerformanceHere is an animation of the AM Brickwall 160 M Filter performance taken using a spectrum analyzerfrom north of Washington DC just 4.4 miles from radio station WTOP at 1500 kHz and 50,000 Wattsand an omni pattern.Below is the AM Brickwall Filter response from a location north of Dallas (Dallas/Ft. Worth metro area).The two Spectrum Analyzer CRT displays show the amplitude response from about .7 MHz through 2.7MHz at 200 KHz/division. This display shows the "before and after attenuation" - the 'without and with'spectrum and demonstrates how effective the AM BrickWall Filter is in attenuating signals in the AMBroadcast band while exhibiting minimal insertion loss to the 160 Meter band frequencies (1.8 MHz andabove).The leftmost five divisions represent the top half of the AM Broadcast band from about .7 through 1.7MHz; the center is exactly 1.7 MHz and shows the signal present at my QTH from a 10,000 Wattomnidirectional 1.700 MHz station located here in North Central Texas. The 160 Meter band (1.80 - 2.0MHz) starts in the middle of division six (counting from the left).http://www.dallas.net/ jvpoll/Filter/TheAMBrickWall.htmlPágina 4 de 9

AM Brick-Wall 160 Meter Filter03/03/09 12:47Without Brickwall filter*With* Brickwall filter!Insertion loss in the 160 Meter band is less than .8 dB at the very low end of the band (1.8 MHz) andless than .5 dB at the high end (2.0 MHz) of the band.Notes: An active antenna was used to obtain live off-the-air signals for this demonstration. Thisparticular active antenna itself is relatively immune - contributes relatively little to 'intermodulation'products which result from the multitude of strong signals present due to the numerous AM Broadcastsites in and around the DFW area. By contrast, the old Radio Shack DX-302 I use for some testing*must* be operated with 20 dB of attenuation switched-in when near the AM Broacast Band - unless theAM Brickwall Filter is placed in-line that is!Comparison with Competing products160 M Bandpass Filters, BCB Highpass 'Interference' FiltersThere are for sale today several very fine products that are built to reduce interference (notably, verystrong signals) which emanate from commercial AM broadcast services in what has come to be knownas "the AM Broadcast band" here in the United States. Today that band extends up to 1.700 MHz (thehttp://www.dallas.net/ jvpoll/Filter/TheAMBrickWall.htmlPágina 5 de 9

AM Brick-Wall 160 Meter Filter03/03/09 12:47last 'authorized' station in the AM broadcast band has a carrier frequency of 1.700 MHz - sidebandsextend up a few kilohertz from there).Here is a short, and hopefully representative, list of filters currently available:1a) Transmit capable filters, BandPass:Bandpass filter, 160 Meter: W3NQN Single Band Transceiver Bandpass FiltersRange: 160 Meter band only (1.8 MHz - 2.0 MHz)Performance: Only about 3 dB attenuation at 1.700 MHz and 15-16 dB at 1.5 MHz40 dB down point approximately 1.100 KHz1b) Transmit capable filters, HighPass:High pass filter, BCB Interference Filter ICE (Industrial Communications Engineers, LTD) Model402XRange: 160 Meters to ? (1.8 MHz to ?) (upper frequency limit not specified)Performance: Only about 8 dB attenuation at 1.700 MHz and 20 dB at 1.5 MHzSWR not specifiedThe North-Central Texas AM-Band Brick-Wall Broadcast FilterRange: 160 Meters through 10 Meters (1.8 MHz to 30 MHz)Performance: 40 dB attenuation at 1.703 MHz and below (this means 40 dB or greater at 1.5MHz, etc.)SWR is less than 1.30 to 1 starting at 1.800 MHzSWR is less than 1.10 to 1 above 3.500 MHz2) Receive only filters:High pass, receive only: Par BCST-HPFThe W3NQN 160 Meter Bandpass filterThe W3NQN 160 Meter Bandpass filter exhibits performance as shown in the following figure. I haveevery confidence this filter lives up to the performance specifications advertised. If a bandpass filterfunction is what you need with the center bandpass frequency centered on the 160 M band within theperformance envelope shown - this filter is clearly for you.Now on to analyzing a few performance characteristic on the W3NQN 160 Meter bandpass filter:The attenuation of this filter at 1.7 MHz appears to be something less than 5 dB - perhaps on theorder of 3 dB (3 dB is what I estimate when if I blow the graph up in size and visualize where theperformance curve crosses an imaginary 1.7 MHz marker line).Notice the performance at 1.5 MHz - I estimate 15, maybe 16 dB of attenuation where theattenuation curve crosses the vertical line denoting 1.5 MHz on the graph. By contrast, The NorthCentral Texas AM-Band Brick-Wall Broadcast Filter will exhibit a minimum of 40 dB at thispoint.I also estimate that the 40 dB down point on this 160 M BP Filter as being approximately 1.100KHz - the The North-Central Texas AM-Band Brick-Wall Broadcast Filter has been delivering atleast 40 dB of attenuation long before this point.http://www.dallas.net/ jvpoll/Filter/TheAMBrickWall.htmlPágina 6 de 9

AM Brick-Wall 160 Meter Filter03/03/09 12:47The ICE Model 402X Highpass FilterThis filter is a little more loosely "spec'd", shall I say. Below in the figure is a graph denoting this filter'scharacteristics up to the point where it exhibits 40 dB of attenuation.I estimate the attenuation (the IL) at 1.7 MHz to be something over 5 dB and certainly less than 10dB; I shall peg it to be 7 or 8 dB.At 1100 KHz the attenuation finally approaches 40 dBThere are no SWR ('VSWR' or RL) specs that I can see on the web site where this filter isdisplayed.Real-world filters do not exhibit the 'clean' cutoff curves depicted below, so, one might expect that theInsertion Loss on the low end of 160 Meters (1.8 MHz) could to be a dB or so with a correspondinglyadverse SWR of perhaps 1.7 to 1. Perhaps the IL is not that bad and the SWR is not as bad as Iextrapolate .The North-Central Texas AM-Band Brick-Wall Broadcast Filterhttp://www.dallas.net/ jvpoll/Filter/TheAMBrickWall.htmlPágina 7 de 9

AM Brick-Wall 160 Meter Filter03/03/09 12:47Below is a representation of the IL (S 21) and RL (S 11) swept performance of the AM-Band Brick-WallFilter. This representative sweep is from 500 KHz (on the far left side of the graph) through 5.5 Mhz (onthe far right side of the graph).Notice the near razor-sharp cutoff that occurs between 1.7 MHz and 1.8 MHz - this 'cutoff' exceeds40dB at and below 1.7 MHz.Given the sweep range of .5 - 5.5 MHz the horizontal scale for this sweep works out to 500 KHz/divisionresulting in horizontal scale 'tick' marks every 1/2 MHz resulting in a scale beginning at 0.5 MHz (farleft) followed by 1.0 MHz, 1.5 MHz, 2.0 MHz, 2.5 MHz and so on up to 5.5 MHz (far right).Below are two figures that more closely depict the AM Brickwall Filter's performance in and around the160 Meter and AM Broadcast bands. These 'plots' are screen captures from RFSim99 and very closelyresemble the actual performance of a real North-Central Texas AM-Band Brick-Wall Broadcast Filter it's just too cumbersome to record a couple of hundred data points by hand and enter them into aspreadsheet for display so I shall use the a screen capture of the results of a modeling run produced byRFSim99.In the figures below, note that:The 1st figure has the 'marker' placed at 1.7 MHz and the second figure has the marker placed at1.8 MHz.The Start and Stop sweep frequencies, as indicated in the start and stop parameter windows are 1.5and 2.0 MHz respectively resulting in a horizontal scale of 50 KHz per division.The center of the graph (where Blue and Red lines cross) therefore represents 1.75 MHz.The 'Red line' on the graph indicates S21 (or Insertion Loss) and works with the left scale - it ismarked in 5 dB graduations.The Blue line indicates S11 (or Rho or Reflection Coefficient and relates to the SWR/Return Lossvalues) and works with the right scale which is set for 0.1 per division. A Rho value of 0.1corresponds to a RL (Return Loss) value of 20 dB and an SWR of 1.22:1. A Rho value of 0.2would indicate an SWR value of 1.5:1.This figure directly below shows an attenuation of 44.45 dB at 1.7 MHz - this is the highest allocatedchannel in the AM broadcast band at present. Notice that everything below 1.7 MHz is better than 40 dB'down'.http://www.dallas.net/ jvpoll/Filter/TheAMBrickWall.htmlPágina 8 de 9