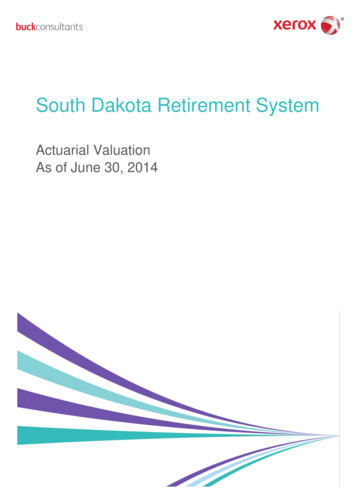 David H. Slishinsky,ASAPrincipal, Consulting ActuaryRetirementWealth PracticeNovember 5, 2014Board of TrusteesSouth Dakota Retirement SystemPost Office Box 1098Pierre, SD 57501-1098Buck Consultants, LLC1200 17th StreetSuite 1200Denver, CO [email protected] 720.359.7773fax 720.359.7701This report summarizes the results of Buck Consultants, LLC’s annual Actuarial Valuation of theSouth Dakota Retirement System (SDRS) as of June 30, 2014. Actuarial valuations of SDRS areperformed annually.This Actuarial Valuation is based on financial and Member data provided by SDRS andsummarized in this report. The actuary did not verify the data submitted, but did perform tests forconsistency and reasonableness.All Members of Participating Units of SDRS and all benefits in effect on July 1, 2014 have beenconsidered in this Actuarial Valuation. SDRS benefit provisions considered, Member data, andTrust Fund information are summarized in the Appendices in this report.The assumptions and methods used to determine the Actuarially Determined Contribution of theEmployers to SDRS as outlined in this report and all supporting schedules meet the parametersand requirements for disclosure of Governmental Accounting Standards Board (GASB)Statement No. 67, Financial Reporting for Pension Plans. Buck Consultants, LLC is solelyresponsible for the actuarial data presented in this report.SDRS is funded by Employer and Member Contribution Rates as established by South Dakotalaw. The funding objective for SDRS is that these statutory rates continue to be sufficient to fundthe System benefits as a level percent of Member Compensation. The SDRS Board of Trusteeshas also established funding policy objectives that the System be fully funded, resulting in noUnfunded Actuarial Accrued Liability and that the statutorily required contributions meet orexceed the amount required to pay the Normal Costs of SDRS, System Expenses, and amortizethe Unfunded Actuarial Accrued Liability as a level percent of Member Compensation over aperiod not to exceed 20 years if the System is not fully funded.As noted below, the fully funded objectives are currently being met and are projected to continueto be met.Our calculations and analysis indicate that the System is meeting its funding objectives and is inactuarial balance. The combined statutory Employer/Member Contributions exceed the amountrequired to pay the current Normal Costs and Expenses of the System. As of June 30, 2014, theUnfunded Actuarial Accrued Liability is 0. The contractual Employer Contribution Rates toSDRS meet the requirements of the Actuarially Determined Contribution of the Employers ofGASB Statement No. 67.

The SDRS Board of Trustees measures and compares the funding progress of SDRS on severalbases. The Actuarial Value Funded Ratio is 100.0% and the Fair Value Funded Ratio is 107.3%.(In the past, this measure was identified as the Market Value Funded Ratio.)Based on Member data and asset information provided by SDRS, we have prepared theSchedule of changes in the Net Pension Liability and Schedule of Employer Contributions inaccordance with GASB No. 67 parameters that are included in the Financial section of the CAFR.The undersigned is an Enrolled Actuary, Associate of the Society of Actuaries and a Member ofthe American Academy of Actuaries and meets the Qualification Standards of the AmericanAcademy of Actuaries to render the actuarial opinions contained in this report. This report hasbeen prepared in accordance with all Applicable Standards of Practice. We are available toanswer any questions on the material contained in the report, or to provide explanations or furtherdetails as may be appropriate.Future actuarial measurements may differ significantly from current measurements presented inthis report due to plan experience differing from that anticipated by the economic anddemographic assumptions, increases or decreases expected as part of the natural operation ofthe methodology used for these measurements, and changes in plan provisions or applicable law.Due to the limited scope of this report, an analysis of the potential range of such futuremeasurements has not been performed.It is our opinion SDRS is meeting its actuarial funding policy.Respectfully submitted,David H. Slishinsky, ASA, EA, MAAA, FCAPrincipal and Consulting ActuaryDisclosure: Use of this report for any other purposes or by anyone other than the Board members and staffof SDRS may not be appropriate and may result in mistaken conclusions because of failure to understandapplicable assumptions, methods, or inapplicability of this report for that purpose. No one may make anyrepresentations or warranties based on any statements or conclusions contained in this report without BuckConsultants’ written consent.

Executive SummaryOverviewThe South Dakota Retirement System (SDRS) provides pension and ancillary benefitpayments to the terminated and retired employees of the participating publicemployers of the State of South Dakota. A Retirement Board comprised of employer,employee, and appointed representatives is responsible for administering SDRS.The South Dakota Investment Council is responsible for making investment decisionsregarding SDRS assets. This report presents the results of the actuarial valuation ofSDRS benefits as of the valuation date of June 30, 2014.PurposeAn actuarial valuation is performed on SDRS annually as of the end of the system’sfiscal year. The main purposes of the actuarial valuation detailed in this report are:1. To determine if the Board’s funding policy for SDRS is being met consideringcurrent assets and the current statutory employer and member contribution rates;2. To disclose the funding assets and liability measures as of the valuation date;3. To disclose the accounting measures for SDRS required by GASB No. 67 as ofthe end of the fiscal year;4. To review the current funded status of SDRS;5. To compare actual and expected experience under SDRS during the last fiscalyear;6. And to report trends in contributions, assets, liabilities, and funded status over thelast several years.The actuarial valuation provides a “snapshot” of the funded position of SDRS basedon the statutory plan provisions, membership, assets, and actuarial assumptions asof the valuation date.This Actuarial Valuation is the twenty-ninth Actuarial Valuation of SDRS sinceconsolidation in 1974. Effective with the Actuarial Valuation as of June 30, 1997,annual, rather than biennial, Actuarial Valuations of SDRS are completed.1

SDRS Benefit ChangesThere were changes to the disability and survivor benefits during the 2014 SouthDakota Legislative session. In addition, the South Dakota Cement Plant retirementplan was merged into the South Dakota Retirement System as of April 1, 2014.SDRS Actuarial AssumptionsThe healthy employee, retiree and disabled retiree mortality tables were changed forthe 2014 Actuarial Valuation to more accurately reflect expected future mortalityimprovement.SDRS Actuarial Methods and FundingObjectivesThe Board of Trustees’ Funding Policy objectives include an Actuarial Value FundedRatio of 100% and a Fair (Market) Value Funded Ratio of at least 100%. As of June30, 2014, a transfer of 599 million was made from the Cushion to the Actuarial Valueof Assets to fund the net impact of the change in mortality assumptions and thechange to the disability and survivor benefits. With this transfer to the Actuarial Valueof Assets from the Cushion (and adjustment to the Reserve), SDRS continues tomeet these objectives. As a result, statutorily required Employer and MemberContributions meet all actuarially required contributions and will contribute to theCushion and Reserve in future years.Key SDRS Actuarial MeasuresThe key actuarial measures determined by the current and prior Actuarial Valuationsare as follows:June 30, 2013Actuarial ValuationFunding PeriodJune 30, 2014Actuarial ValuationN/AN/AFrozen Unfunded Actuarial Accrued Liability 0 0Fair Value of Assets 9,085,706,708 10,607,554,492Actuarial Value of Assets 8,803,761,326 9,887,095,388Actuarial Accrued Liability 8,803,761,326 9,887,095,388Actuarial Value Funded Ratio100.0%100.0%Fair Value Funded Ratio103.2%107.3%Reserve for Funding of Long-Term Benefit Goals (1,106,063,511) Cumulative Gains to be Allocated to the Reservein Future Years 1,303,115,302 (950,717,727)1,586,283,2402

Section 1 Actuarial Funding Results1.1 2014 Actuarial Funding ResultsSummary of Key Actuarial entandLiabilityExperience1for YearMembershipChangesand Maturity2of SystemChanges inBenefitProvisions,ActuarialMethods orActuarialAssumptionsEffective3July 1, 201410.204%--(0.108)%0.715%10.811%N/A------N/A 0 million------ 0 millionActuarial ValueFunded Ratio100.0%------100.0%Fair Value FundedRatio103.2%11.0%--(6.9)%107.3%Normal Cost Rate withExpense ProvisionFunding PeriodFrozen UnfundedActuarial AccruedLiability2014ActuarialValuationResults1SDRS Actuarial Investment Gains and Liability Gains and Losses impact the Cushion and the Fair (Market)Value Funded Ratio and are smoothed and allocated directly to the Reserve for Funding of Long-Term BenefitGoals over five years. All SDRS Actuarial Investment Losses are allocated immediately to the Reserve. TheActuarial Value of Assets is increased by the SDRS Liability Loss or decreased by the SDRS Liability Gaineach year.2Changes to the membership from year to year will cause minor changes in the Normal Cost Rate.3Disability and certain survivor benefit provisions were changed by 2014 legislations. In addition, the Boardadopted revisions to the mortality assumption effective for the June 30, 2014 valuation. The net increase inthe Actuarial Accrued Liability due to the benefit provision and actuarial assumption changes was funded by a 599 million transfer from the Cushion to the Actuarial Value of Assets.4

Risk Management Contribution of 38 million credited to Reserve andCushion. A balance in the Reserve as of June 30, 2014 of (951) million. 1,586 million remaining to be allocated to the Reserve in the next four years.Note that future events such as adverse investment returns, continuing increase inlife expectancies greater than assumed or other demographic losses may adverselyimpact the funded status of SDRS.SDRS is a consolidated, multiple employer, cost-sharing retirement system that doesnot attempt to determine separate or unique funding requirements for entities withinSDRS. However, the 2014 Actuarial Valuation confirms that the two major Membergroups within SDRS with different funding and benefit provisions (Class A and ClassB) are generally self-supporting (i.e. – the Employer and Member Contributions arefunding the Normal Cost of the benefits provided under these classifications).The combination of actuarial assumptions and methods used in the ActuarialValuation, the actual experience of the System, and the actuarial measures utilized allindicate a continuing sound System.9