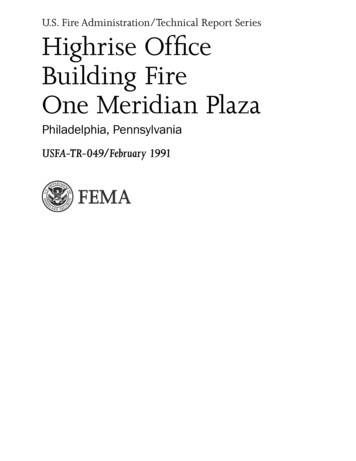 U.S. Fire Administration Fire Investigations ProgramThe U.S. Fire Administration develops reports on selected major fires throughout the country.The fires usually involve multiple deaths or a large loss of property. But the primary criterionfor deciding to do a report is whether it will result in significant “lessons learned.” In somecases these lessons bring to light new knowledge about fire--the effect of building construction orcontents, human behavior in fire, etc. In other cases, the lessons are not new but are serious enoughto highlight once again, with yet another fire tragedy report. In some cases, special reports are developed to discuss events, drills, or new technologies which are of interest to the fire service.The reports are sent to fire magazines and are distributed at National and Regional fire meetings. TheInternational Association of Fire Chiefs assists the USFA in disseminating the findings throughout thefire service. On a continuing basis the reports are available on request from the USFA; announcements of their availability are published widely in fire journals and newsletters.This body of work provides detailed information on the nature of the fire problem for policymakerswho must decide on allocations of resources between fire and other pressing problems, and withinthe fire service to improve codes and code enforcement, training, public fire education, buildingtechnology, and other related areas.The Fire Administration, which has no regulatory authority, sends an experienced fire investigatorinto a community after a major incident only after having conferred with the local fire authoritiesto insure that the assistance and presence of the USFA would be supportive and would in no wayinterfere with any review of the incident they are themselves conducting. The intent is not to arriveduring the event or even immediately after, but rather after the dust settles, so that a complete andobjective review of all the important aspects of the incident can be made. Local authorities reviewthe USFA’s report while it is in draft. The USFA investigator or team is available to local authoritiesshould they wish to request technical assistance for their own investigation.This report and its recommendations were developed by USFA staff and by TriData Corporation,Arlington, Virginia, its staff and consultants, who are under contract to assist the USFA in carryingout the Fire Reports Program.The USFA greatly appreciates the cooperation received from the Philadelphia Fire Department.In particular, the assistance and information provided by Fire Commissioner Roger Ulshafer(ret.), Commissioner Harold Hairston, Deputy Commissioner Christian Scheizer (ret.), DeputyCommissioner Phil McLaughlin, Deputy Commissioner Matthew J. McCrory Jr., Battalion ChiefTheodore Bateman, Battalion Chief Richard Bailey, and Lieutenant Matthew Medley were invaluable.For additional copies of this report write to the U.S. Fire Administration, 16825 South Seton Avenue,Emmitsburg, Maryland 21727. The report is available on the USFA Web site at http://www.usfa.dhs.gov/

U.S. Fire AdministrationMission StatementAs an entity of the Federal EmergencyManagement Agency (FEMA), the missionof the U.S. Fire Administration (USFA) is toreduce life and economic losses due to fireand related emergencies, through leadership, advocacy, coordination, and support. Weserve the Nation independently, in coordination with other Federal agencies, and in partnership with fire protection and emergencyservice communities. With a commitment toexcellence, we provide public education, training, technology, and data initiatives.

ForewordThis report on the Philadelphia, Pennsylvania, One Meridian Plaza fire documents one of the mostsignificant highrise fires in United States’ history. The fire claimed the lives of three Philadelphiafirefighters and gutted eight floors of a 38-story fire-resistive building causing an estimated 100million in direct property loss and an equal or greater loss through business interruption. Litigationresulting from the fire amounts to an estimated 4 billion in civil damage claims. Twenty monthsafter the fire this building, one of Philadelphia’s tallest, situated on Penn Square directly across fromCity Hall, still stood unoccupied and fire-scarred, its structural integrity in question.This fire is a large scale realization of fire risks that have been identified on many previous occasions.The most significant new information from this fire relates to the vulnerability of the systems thatwere installed to provide electrical power and to support fire suppression efforts. In this incidentthere was an early loss of normal electrical power, a failure of the emergency generator and a majorproblem with the standpipe system, each of which contributed to the final outcome. These experiences should cause responsible individuals and agencies to critically re-examine the adequacy of allemergency systems in major buildings.When the initial news reports of this fire emerged, attention focused on how a modem, fire-resistivehighrise in a major metropolitan city with a well-staffed, well-equipped fire department could beso heavily damaged by fire. The answer is rather simple -- fire departments alone cannot expect orbe expected to provide the level of fire protection that modern highrises demand. The protectionmust be built-in. This fire was finally stopped when it reached a floor where automatic sprinklershad been installed.This report will demonstrate that the magnitude of this loss is greater than the sum of the individualproblems and failures which produced it. Although problems with emergency power systems, standpipe pressure reducing valves, fire alarm systems, exterior fire spread, and building staff response canbe identified, the magnitude of this fire was a result of the manner in which these factors interactedwith each other. It was the combination of all of these factors that produced the outcome.At the time of the One Meridian Plaza fire, the three model fire prevention codes had already adoptedrecommendations or requirements for abating hazards in existing highrise buildings. Each of themodel building codes contains explicit requirements for fire protection and means of egress inhighrise buildings. Actions were and are underway in many cities and several States to require retrofitting of existing highrise buildings with automatic sprinkler systems, fire detection and alarmsystems, and other safety provisions. Since the Meridian Plaza fire, the National Fire ProtectionAssociation’s Technical Committee on Standpipe Systems has proposed a complete revision of NFPA14, Standard for Installation of Standpipe and Hose Systems. The new version of NFPA 14 was approved by theNFPA membership at the 1992 fall meeting in Dallas, Texas. All of these efforts are necessary andcommendable. To prove successful, however, they must take a comprehensive, holistic approach tothe problem of highrise fire safety, if we are to keep One Meridian Plaza from being surpassed by yetanother devastating fire.

The answer is rather simple -- fire departments alone cannot expect or be expected to provide the level of fire protection that modern highrises demand. The protection must be built-in. This fire was finally stopped when it reached a floor where automatic sprinklers had been installed. This report will demonstrate that the magnitude of this loss is greater than the sum of the individual .

independent specialists, with a Head Office in the