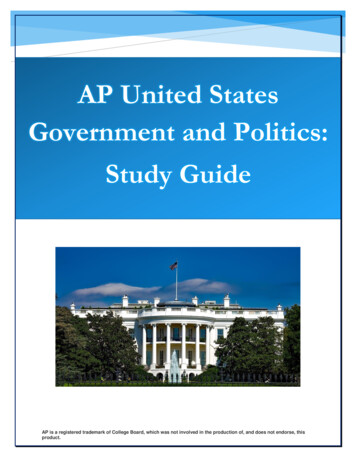 AP United StatesGovernment and Politics:Study GuideAP is a registered trademark of College Board, which was not involved in the production of, and does not endorse, thisproduct.

Key Exam DetailsThe AP U.S. Government and Politics exam will test your knowledge of material typicallycovered in a one-semester college introductory-level course about U.S. government andpolitics. The 3-hour exam is comprised of 55 multiple-choice questions (50% of the exam) and 4free-response questions (50% of the exam).The exam covers the following topics: Foundations of American Democracy: 15–22% of test questions Civil Liberties and Civil Rights: 13–18% of test questions Interactions Between Branches of Government: 25–36% of test questions Political Participation: 20–27% of test questions American Political Beliefs and Ideologies: 10–15% of test questionsThis guide will give you a review of all major exam topics, with an emphasis on the termscovered in each exam section. Following every topic overview are sample AP multiple-choicequestions so you can get a sense of how information will be presented on test day.Foundations of American DemocracyAbout 15–22% of the questions on your AP exam will cover the topic Foundations of AmericanDemocracy.Types of DemocracyLet’s take a look at the various types of democracy that exist in political theory.Direct democracy allows citizens to directly govern and make laws. It is considered a chaoticand inefficient system, especially in societies with large populations. It also has significant riskslike the majority violating the rights of the minority.Participatory democracy values broad based public participation in governing. In theory, itkeeps government closest to the people and their opinions.Representative democracy/republicanism is a theoretically more efficient system that allowscitizens to elect representatives who then govern for them. It allows a smaller and moremanageable group to make decisions more quickly. Republicanism retains important elements1

of broad public participation in government while making governing less chaotic and moreefficient.Elite democracy/elitism favors allowing the best educated and most qualified members ofsociety to govern in the best interests of the country. This system favors having a small group ofthe best-informed people to govern.Majoritarian democracy promotes majority rule. It places power in the hands of the majorityand allows them to govern based on their ideals, and values efficiency in governing and decisiveelections. Critics of majoritarian democracy argue that majorities can easily violate the rights ofminorities if sufficient safeguards are not in place. They also argue that majoritariandemocracy’s winner-take-all elections make politics a zero-sum game where candidates andgroups are encouraged to do whatever it takes to win.Consensus democracy promotes the sharing of power across diverse groups. Power isdisbursed throughout the system, and therefore all groups are required to compromise withone another. Critics of consensus democracy argue that it is inefficient and creates unnecessaryhurdles to decision making, especially when quick decisions are needed in times of crisis.Founding DocumentsThe Declaration of Independence, created by the Second Continental Congress on July 4, 1776,declares the British Colonies in North America to be a free and independent country. Authoredby Thomas Jefferson and others, the Declaration of Independence relies heavily on theconcepts of Natural Rights, Popular Sovereignty, and Social Contract Theory to argue that theformer colonies are empowered to create their own government because of the abusessuffered under British rule. Natural rights are rights that exist in a “state of nature,” or where no government existswhatsoever. English philosopher John Locke proposed these rights in his work, TwoTreatises of Government. Locke proposed that there are three basic natural rights: life,liberty, and property. These rights are “negative” rights, which means that they are arestriction on others. It means that other people ought not to kill us (Life), ought not tointerfere with us (Liberty), and ought not to take what is ours (Property). Popular sovereignty is a concept that people are the highest level of power in society.The power of government to govern comes from the people. When people consent tobe governed, government gains its legitimacy. Social contract theory states that people should consent to be governed and inexchange the government will provide protections and certain public goods to thepeople. Proposed by English philosopher Thomas Hobbes in Leviathan, social contracttheory is a fundamental theory that supports constitutional governments, because2

Congress was unable to fund an army to put down the uprising. The result of this rebellion ledto calls for a constitutional convention to fix the national government.The Constitution of the United StatesIn the aftermath of Shays’ Rebellion, a constitutional convention was called in the summer of1787. The initial idea behind this convention was to fix the Articles of Confederation. This ideawas abandoned relatively quickly in favor of creating a whole new system of government. Thenew government abandoned the system of Confederation in favor of a system of federalism,where the national government and state governments would share powers but the nationalgovernment would have significantly more powers than under the Articles of Confederation.The constitutional convention featured a series of proposals and compromises that allowed thenew government to be formed. The initial compromise was over representation. The VirginiaPlan, proposed by the large states, created a Congress with two houses—both based onrepresentation. The New Jersey Plan, proposed by the small states, created a Congress withone house based on equal representation from each state.Another compromise was reached between slaveholding and non-slaveholding states, knownas the Three-Fifths Compromise, in which free persons would be counted as a whole personand slaves would be counted as three-fifths of a person. In addition to this compromise onslavery, non-slaveholding states also agreed not to regulate the slave trade prior to the year1808.The Great Compromise, also known as the Connecticut Compromise, created a bicameral, ortwo-house legislature, with the House of Representatives being based on population and theSenate being based on equal representation from each state.Drawing on the ideas proposed by French political philosopher Charles Montesquieu, thenational government was separated into three branches: the executive branch, the legislativebranch, and the judicial branch. Each branch of government was given specific and uniquepowers that could not be exercised by the other branches. This system is known as separationof powers. The idea behind separation of powers is to use the structure of government tocontrol government and the officials within the government.In addition to separation of powers, each branch of government was given certain powers overthe other branches. For example, Congress can impeach and remove officers of the executiveand judicial branches, the executive branch has the law enforcement power and commandd themilitary, and the judicial branch has the power to interpret law and the Constitution. Thissystem is known as checks and balances.The Constitution of the United States relies heavily on the concept of republicanism and muchless on the idea of participatory or popular democracy. Only the House of Representatives in4

the legislative branch is directly elected by the people in the original version of theConstitution. Senators were initially appointed by their state legislatures, and the President ofthe United States was elected by the Electoral College (and still is to this day).The Electoral College places a buffer between the people and the powerful position ofpresident of the United States. As originally designed, the Electoral College selects thepresident and may or may not vote with how the people of their state voted. This is an elementof elite democracy. As it functions now, the people of the state vote on which slate of electorsto send to Washington, DC, to elect the president of the United States. The electors themselvesare chosen by their political parties, and in most cases vote for who won the popular vote intheir state. However, there can be “faithless electors” who vote for someone other than whothe people of their state chose.The national government under the Constitution of the United States is one of enumerated andimplied powers. Enumerated powers are those powers specifically listed in the Constitution;they are augmented by powers that are not specifically mentioned but implied in certainphrases in the constitutional text. These implied powers serve as tools with which the nationalgovernment can execute the enumerated, or specifically listed, powers granted to it by theConstitution. Unlike the Articles of Confederation, the powers of the national government neednot be specifically and minutely listed to exist. This system of enumerated and implied powersstill provides a limited government framework but allows the government to possess all thetools it needs to function properly.Constitutional StructureThe Constitution of the United States is separated into seven articles.Article IArticle I created the Congress and legislative branch.The House of Representatives is based on population, with the most populous state receivingthe greatest number of representatives. Each state is guaranteed at least one representative.There are currently 435 seats in the House of Representatives.A member of the House of Representatives must be at least 25 years of age, a citizen of theUnited States, and reside within the state they represent. Members of the House ofRepresentatives are elected every two years by the people of their districts. This makes theHouse of Representatives the closest part of government to the people, and therefore the mostsubject to popular opinion and swings in public sentiment.The Speaker of the House, a constitutionally defined position, is the most powerful person inCongress. The Speaker leads the House of Representatives and is selected by its members. The5

Speaker of the House need not be a member of the House, but is almost always a member andthe leader of the majority party.The Census is also included in Article I of the Constitution. It requires the population be countedat least every 10 years; from this count, representation is apportioned to each state based onpopulation. Since currently there are 435 members of the House, each member representsapproximately 700,000 people.The House of Representatives has the power of impeachment, which is a formal charge ofwrongdoing against a member of the executive or judicial branches.All bills raising taxes must originate in the House but can be amended by the Senate.The United States Senate is comprised of two representatives from each state, initially selectedby state legislatures but now elected by the people of the states after passage of theSeventeenth Amendment. Senators serve terms of six years. The Senate is divided into threeclasses, so that one-third of the Senate is up for election every two years. To serve as senator,one must be at least 30 years of age, a citizen of the United States, and a resident of the statethey represent.The Vice President of the United States presides over the S

hurdles to decision making, especially when quick decisions are needed in times of crisis. Founding Documents The Declaration of Independence, created by the Second Continental Congress on July 4, 1776, declares the British Colonies in North America to be a free and independent country. Authored by Thomas Jefferson and others, the Declaration of Independence relies heavily on the concepts of .

US Hegemony in World Politics

Government by Algorithm: Artificial Intelligence in .

The Ultimate Student’s Guide to AP US Government

The Alabama Journal of Government Finance