A Comprehensive Review Of The Federal 340B Drug 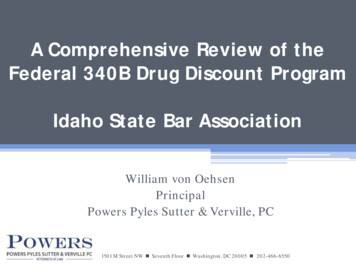 Disclaimer The speaker represents 340B providers, 340B providergroups, Medicaid agencies, Medicaid managed careplans and other Medicaid-related organizationsThis presentation is not to be construed or relied uponas legal advice2

340B Primer: Background 340B drug discount program requires pharmaceuticalmanufacturers participating in the Medicaid program toprovide discounts on covered outpatient drugspurchased by federally-funded clinics and other safetynet providers referred to as “covered entities” (CEs)The rights and obligations of CEs and manufacturers areset forth in Section 340B of the Public Health ServiceAct (PHSA)Section 1927 of the Social Security Act (SSA) requiresmanufacturers to enter into a pharmaceutical pricingagreement (PPA) with the Secretary of Health andHuman Services (HHS) as a condition of Medicaid andMedicare Part B covering the companies’ outpatientdrugs4

340B Primer: Covered Entities (cont’d) DSH, children’s and cancer hospitals are subject to aunique eligibility requirement, namely, they areprohibited from purchasing covered outpatient drugsthrough a group purchasing organization (GPO) or othergroup purchasing arrangement. PHSA340B(a)(4)(L)(iii)For hospitals that use replenishment-based virtualinventory systems, initial purchases of an NDC must beon a non-340B, non-GPO account, typically at wholesaleacquisition cost (WAC), and replenishment under thehospital’s 340B and GPO accounts must be for the sameNDC (including package size) as for the drugs dispensedor administered. See HRSA Release No. 2013-1,Statutory Prohibition on Group Purchasing OrganizationParticipation (2/7/13)8

340B Primer: Calculating Ceiling Price 340B ceiling price average manufacturer price(AMP) minus unit rebate amount (URA)Special procedures for calculating 340B price fornew drugs: Manufacturers must estimate a new drug’s 340Bceiling price for the first 3 quarters that the drug is onthe marketAfter 3 quarters, manufacturers will have AMP andbest price data to calculate the ceiling price Penny prices –If URA exceeds AMP, then themanufacturer must charge a penny for the drug. SeeHRSA Release No. 2011-2, Clarification of PennyPricing Policy (11/21/11)9

CE Restrictions: Anti-Diversion “A covered entity shall not resell or otherwise transfer the[340B-discounted] drug to a person who is not a patient ofthe entity.” PHSA 340B(a)(5)(B) HRSA has established a three-pronged test for evaluatingwhether an individual falls within the definition of a“patient.” 61 Fed. Reg. 55,156 (10/24/96) An individual is not a “patient” if the only service receivedfrom the CE is the dispensing of a drug or drugs forsubsequent self-administration or administration in thehome setting. 61 Fed. Reg. 55,156 (10/24/96)16

CE Restrictions: Anti-Diversion (cont’d) ADAP patients – an individual registered in a stateoperated or funded AIDS drug purchasing assistanceprogram receiving financial assistance under titleXXVI of the PHSA will be considered a “patient” ofthe covered entity for purposes of this definition if soregistered as eligible by the state programHospital patients Third prong of patient definition does not apply Purchase of 340B drugs for inpatient use or in violationof the orphan drug exclusion is considered diversion18

ACA: Medicaid Changes ACA extended Medicaid rebate program to drugs coveredby managed care organizations (MCOs) unless purchasedthrough 340B MCO drugs are not rebatable when purchased through340B program. SSA 1927(j) HRSA has clarified that the Medicaid exclusion file does notapply to MCO claims How 340B drugs are billed and reimbursed is generally amatter of private negotiation between the CE (or itspharmacy) and the MCO (or its pharmacy benefit manager) According to the HHS Office of Inspector General (OIG),states’ success at establishing systems to exclude 340BMCO claims from rebate requests has been mixed19

ACA: Integrity Provisions HHS must issue regulations to establish a formalalternative dispute resolution (ADR) process Current process is voluntary and outcomes are not legallybinding Must exhaust this process before proceeding to court Both manufacturers and CEs must use this process HRSA issued a proposed ADR regulation this summerand the comment period closed on October 11. 81 Fed.Reg. 53381 (8/12/16) HRSA received thirty-one comments20

ACA: Integrity Provisions (cont’d) HHS is also required to make 340B ceiling prices available toCEs and to develop a system for verifying the accuracy of 340Bprice calculations OPA posted on its website an update on a new pricing system“designed to calculate, verify and display 340B ceiling prices.” Verification – Manufacturers will upload their quarterlypricing data to validate their prices with the HRSA-verified 340Bceiling prices CE access to pricing – CEs will be assigned log-in credentialsto view 340B ceiling prices on a password-protected website In December 2015, OPA provided on its website a link to asample notification form for informing the government when340B prices are unavailable21

ACA: Integrity Provisions (cont’d) Manufacturers are subject to civil monetary penalties (CMPs)for “knowing and intentional” overcharges, and HRSA issuedthis year a final rule implementing this provision Delegates authority to the OIG to enforce Imposes up to 5,000 for each “instance of overcharging” which isdefined on a per-order basis Obligation to issue refunds for over-estimating 340B price for newdrugs no longer be conditioned on a request by CE82 Fed. Reg. 1210 (1/5/17) HRSA’s final rule also addressed what it means for anovercharge to be “knowing and intentional” when theovercharge is inadvertent or manufacturer acted on reasonableinterpretation of agency guidance. See 82 Fed. Reg. 1220-2222

ACA: Integrity Provisions (cont’d) HRSA also addressed two pricing issues in the final rule Penny pricing – ceiling price set at 0.01 if calculation of ceilingprice results in less than 0.01 New drugs – estimate ceiling using 340B discount off of WAC untilAMP is available Following the Trump Administration’s regulatory freeze, HRSAdelayed the effective date to May 22, 2017 and has solicited commentson whether the rule should be delayed further to October 1, 2017 HHS is also required to issue guidance on the refund process forovercharges Under the ACA, refunds are owed to CEs in the event of anovercharge, including when AMP and best price are restated23

ACA: PPA Changes In August 2016, OMB approved an addendum to the PPA.See OMB Information Collection Request, Control No:0915-0327 (8/23/16)The addendum incorporates into the PPA twomanufacturer program integrity provisions passed underthe ACA: Manufacturers must make quarterly reports to HHS of 340Bceiling prices for covered outpatient drugs; and Manufacturers must offer covered entities the opportunityto purchase a drug at or below the ceiling price if the drug isavailable to another purchaser at any price. The addendum is available on the OPA website25

ACA: Recertification Focus of recertification is that CE information on OPAdatabase is accurate and up to dateTwo-step process in which CEs have to: Correct information for existing sites and/or decertify sitesthat no longer exist or use 340B drugs Certify that CE meets eight 340B compliance standards,including duty to disclose to OPA any material breach of a340B requirement New recertification forms have dropped the materialitylanguage but OPA website still directs CEs to reportmaterial violations26

ACA: Orphan Drug Exclusion “Orphan drugs” are excluded from scope of coveredoutpatient drugs subject to 340B discounts for newlyeligible rural and cancer hospitals “Orphan drugs” (1) are designed to treat rare diseases and conditionsthat affect fewer than 200,000 patients in the U.S. or, (2) if the disease or condition affects more than200,000 patients in the U.S., will produce sales that failto cover R&D costs Congress removed children’s hospital from the banpursuant to post-ACA legislation27

ACA: Orphan Drug Exclusion (cont’d) HRSA issued a regulation that would limit theprohibition "to uses for the rare disease or conditionfor which the orphan drug was designated.” 78 Fed.Reg. 44016 (7/23/13) The rule was enjoined as a result of a lawsuit byPhRMA. PhRMA v. HHS, 43 F.Supp.3d 28 (D.D.C.2014). HRSA issued the same policy as aninterpretive rule which was also overturned. PhRMAv. HHS, No. 14-1685, Mem. Op. (D.D.C. 10/14/15) OPA recently clarified on its website thatmanufacturers may voluntarily offer 340B prices onorphan drugs28

Bipartisan Budget Act of 2015: Sec 603 Establishes “site-neutral” Medicare reimbursement tonew off-campus outpatient departments of a provider Effective January 1, 2017, off-campus facilities acquiredby a hospital after the budget bill’s date of enactment(11/2/15) will not be reimbursed by Medicare under thehospital outpatient payment system; they will continueto be paid based on their pre-acquisition status Recent hospital outpatient prospective payment finalrule contains language strongly suggesting that Section603 will not impact 340B hospitals and registration oftheir offsite clinics30

Medicaid Rulemaking: CoveredOutpatient Drugs Several parts of AMP rule address 340B program. 81 Fed.Reg. 5170 (2/1/16)States must file state plan amendments (SPAs) by June 30,2017 providing 340B-specific reimbursement policies basedon AAC Only applies to retail FFS drugs Does not apply to physician administered drugs nor to MedicaidMCO drugs All sales to CEs are exempt from best priceAcknowledges manufacturer obligation to refund CEs whenrestating AMP and/or best price, but clarified that this issuemust be addressed by HRSA31

Medicaid Rulemaking: Managed Care(cont’d) OIG published study in June analyzing state efforts to exclude340B drugs from Medicaid MCO rebate requests OIG found that, to identify 340B drug claims and correctlycollect rebates for MCO drugs, most states use methods thatidentify providers using 340B-purchased drugs. However, provider-level methods may not accurately identifyall individual 340B drug claims, creating a risk of duplicatediscounts and forgone rebates. By contrast, methods that operate at the claim level canimprove accuracy in identifying 340B drug claims, and thereby,help states correctly collect rebates OIG recommended that CMS require states to use claim-levelmethods to identify 340B claims, but CMS did not concur33

Mega-Guidance: CE Concerns Would significantly decrease volume of drugs that could bepurchased through 340B Prescriptions written in unregistered sites would be excluded For hospitals, guidance would disqualify (a) dischargeprescriptions, (b) infusions ordered outside hospital and (c)pre-admission drugs Drugs paid for by Medicaid in a bundled manner would bedisqualified Medicaid MCO drugs dispensed by contract pharmacieswould be “presumed” to be carved out Would significantly increase administrative burden Patient definition would require satisfying six tests ratherthan three Contract pharmacy registration and oversight44

Mega-Guidance: Manufacturer Concerns Does not go far enough in overseeing and controllinggrowth of contract pharmacies Notification of HRSA of limited distribution networksprior to implementation would be burdensome andunauthorized Would require calculation of refunds by NDC and wouldprohibit calculations based on other methods, e.g.,aggregate or net purchases or using de minimusthresholds Increased reporting standards would be burdensome45

IDAHO REPUBLICANS PRESENT NEWHEALTH PLANAPMarch 14, 2017 at 2:03 pm By BILL DENTZERDraft legislation emerging in the Idaho House seeks to meet primary care shortages and cut costsacross the state health care system.Central to the proposal is the