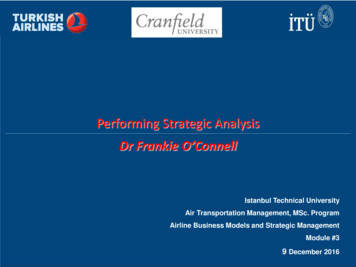 Porter’s five force framework It was developed as a way of accessing the profit potential of a specific industry Competitive rivalry is the degree to which companies respond to competitionPotentialentrantsThreat uyersBargainingpowerThreat ofsubstitutesSubstitutesSource: Porter, Harvard Business School

2 .Buyer Power The buyer market is comprised of all the firms or individuals that purchase theproduct or service. In the airline industry there are a large number of buyers (passengers) anda specific number of airlines. Nevertheless, Alliances (reciprocal FFP) hasreduced this choice. However on many markets there are lots of LCCswhich increases the buyer power of the consumers. Many carriers on theN. Atlantic operate through 5th freedom traffic rights like SIA, ANZ, EK, PIA, KUCustomer buying power is likely to be high due to some of the following conditions Customers can easily switch (low switching costs) between airlines as the farebetween airlines has become highly transparent as well as the in-flight products Corporations (e.g. IBM, Shell Oil) use bargaining power to negotiate discounts forvolume. For example Lufthansa’s corporate contracts accounts for around 38.6%of its total passenger revenues. For Alitalia its 25%

3 .Supplier PowerThe supplier market is comprised of all the companies that provide service tothe airline industrySupplier power is likely to be high when:There is a concentration of suppliers (e.g. Airbus and Boeing)However airlines can influence aircraft prices by: purchasing during a recession;bulk purchasing; or playing one manufacturer against another.Therefore the switching costs from supplier to supplier are high as the airlines’operation are dependent on these specialised products. To switch from an allBoeing to an all Airbus fleet for example would be very costly. easyJet did thisas Airbus wanted to get into the LCC market which was dominated by Boeing 737sMonopolies or near monopolies may exist in supplier markets such as groundhandling (McKinsey), DNATA in Dubai, fuel (Air BP), catering (LSG Sky Chefs), etc

Number of passengersPassenger traffic by Air between London and ParisAnnual airline passengers in millionsSource: UK CAA and Anna.aero

SWOT AnalysisSWOT analysis summarises the key issues from the business environment and thestrategic capability of an organisation that are most likely to impact on strategydevelopmentThe aim is to identify the extent to which the current strengths & weaknesses arerelevant & capable of dealing with the changes occurring in the business environmentSWOT is very useful when it is used as a comparative study. For example theaverage age of Ryanair’s fleet (5.5 years) compared to BA (12.8 years) or comparethe total unit cost of BA is 0.43.6/ATK verses 0.26/ATK for EmiratesThe analysis should identify critical success factors e.g. TAP’s long haul networkto Brazil; Virgin Blue code sharing arrangements with Intl carriers; Jet Airway’ssuperior passenger service in the Indian market; Emirates hub and spoke networkof long-haul to long-haul flights; Saudi Arabian Airline Hajj flights; Korean Aircargo operations, etcIdentify around 6-7 key issues in the organisation’s environment about each attributeand be ‘specific’ rather than ‘general’ as stating ‘poor management’ (means very little)

What is the SWOT for TK?

JetBlue and Lufthansa Equity PartnershipLufthansa purchased 19% equity in Jetblue in 2008 for 309 millionSold entire stake (reduced to 15.2%) in 2015 for 503 million due to its ongoing issues: Pension contributions Pilot strikes Germanwings accident Severe competition from LCCs and Gulf CarriersThis sale enabled Lufthansa to produce a Net profit of 425 million for Q1 of 2015

Ryanair operating to the US?Threat to Long Haul market?

Boston Consulting Group Matrix AnalysisHighStarsQuestion MarksInvest for the futureInvest or DivestCash CowsDogsMarket Growth RateorMarket Attractiveness(Cash Required)Manage for cashLowHighDivestMaintainRelative Market ShareLow(Cash generated)StarsAre products (services) where a company has a market share greater than your mostrelevant (largest) competitor and where the market is growing ‘above average’. Starsrepresent an investment priority - as the market is maturing and you can maintain agreater market share than your nearest competitor – then Star becomes a ‘Cash Cow’

Boston Consulting Group Matrix AnalysisBCG is a good indicator of a company’s competitive positionStarsQuestion MarksMarket Growth RateHighAn airline is a leader in a high growthmarket.An airline in a growing marketbut has a low market shareHowever investment is still required tomaintain growth and defend theleadership positionThe airline may have to spendheavily to gain market shareAs an industry matures and its growthslows, all business units becomeeither cash cows or dogs.It will be difficult for the airline toachieve a sufficient cost reductionto offset such an investmentCash CowsDogsAn airline with a high market share ina mature marketThe need for heavy marketing issignificantly reducedLowAn airline with a low market share ina static or declining marketThese airlines burn through cash and arethe worst of all combinationsThe carrier should be able to maintainunit cost levels similar to competitorsHighMore than 11.0Relative Market ShareLess than 1Low

BCG for Emirates – Measuring its positioning in the market

Ansoff MatrixThis is used for identifying directions for strategic developmentThe development directions are the strategic options available to a firmin terms of products and market coverage, taking into account the strategiccapability of the company and the expectations of tsNewMarket penetrationProtect/BuildProduct developmentMarket developmentDiversificationNewSource: Ansoff

Conclusion The market is picking up – the industry could finally be entering intoan Up-cycle Competitive advantage is Key The Operating Environment for an Airline is influenced by Porters 5 forcesas well as the Macro (PESTEL) and Micro environment, which all have adirect impact on airline strategy The carriers’ strategic capabilities are a very important indicator(SWOT and TOWS) The strategic decision making tools such as BCG and Ansoff are importantanalytical tools which underpin the core competencies of a company

Thank you all very much

SWOT is very useful when it is used as a comparative study. For example the average age of Ryanair’s fleet (5.5 years) compared to BA (12.8 years) or compare the total unit cost of BA is 0.43.6/ATK verses 0.26/ATK for Emirates The analysis should ident

STATE OF NEVADA OFFICE OF THE ATTORNEY GENERAL