Definition And Diagnosis - WHO 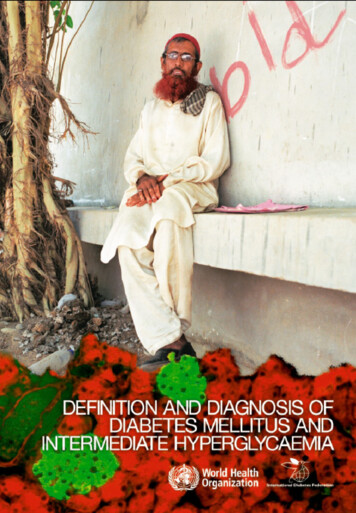 WHO Library Cataloguing-in-Publication DataDefinition and diagnosis of diabetes mellitus and intermediate hyperglycemia :report of a WHO/IDF consultation.1.Diabetes mellitus – diagnosis. 2.Diabetes mellitus - classification. 3.Hyperglycemia. 4.Glucose tolerance test. I.World Health Organization. II.InternationalDiabetes Federation.ISBN 92 4 159493 4(NLM classification: WK 810)ISBN 978 92 4 159493 6 World Health Organization 2006All rights reserved. Publications of the World Health Organization can be obtainedfrom WHO Press, World Health Organization, 20 Avenue Appia, 1211 Geneva 27,Switzerland (tel.: 41 22 791 3264; fax: 41 22 791 4857; e-mail: [email protected]). Requests for permission to reproduce or translate WHO publications– whether for sale or for noncommercial distribution – should be addressed toWHO Press, at the above address (fax: 41 22 791 4806; e-mail: [email protected]).The designations employed and the presentation of the material in this publicationdo not imply the expression of any opinion whatsoever on the part of the WorldHealth Organization concerning the legal status of any country, territory, city orarea or of its authorities, or concerning the delimitation of its frontiers or boundaries. Dotted lines on maps represent approximate border lines for which there maynot yet be full agreement.The mention of specific companies or of certain manufacturers’ products does notimply that they are endorsed or recommended by the World Health Organizationin preference to others of a similar nature that are not mentioned. Errors andomissions excepted, the names of proprietary products are distinguished by initialcapital letters.All reasonable precautions have been taken by the World Health Organizationto verify the information contained in this publication. However, the publishedmaterial is being distributed without warranty of any kind, either expressed orimplied. The responsibility for the interpretation and use of the material lies withthe reader. In no event shall the World Health Organization be liable for damagesarising from its use.Printed by the WHO Document Production Services, Geneva, Switzerland

Summary ofTechnical Reportand recommendationsSince 1965 the World Health Organization (WHO) has published guidelines for the diagnosis and classification of diabetes. These werelast reviewed in 1998 and were published as the guidelines for theDefinition, Diagnosis and Classification of Diabetes Mellitus and itsComplications. Since then more information relevant to the diagnosisof diabetes has become available. In November 2005 a joint WHO andInternational Diabetes Federation (IDF) Technical Advisory Group metin Geneva to review and update the current WHO guidelines.After consideration of available data and recent recommendations madeby other organisations, the Group made the following recommendations:Recommendation 1 The current WHO diagnostic criteria for diabetes should be maintained– fasting plasma glucose 7.0mmol/l (126mg/dl) or 2–h plasma glucose 11.1mmol/l (200mg/dl).Despite the limitations with the data from which the diagnostic criteria fordiabetes are derived, the current criteria distinguish a group with significantly increased premature mortality and increased risk of microvascularand cardiovascular complications.Recommendation 2 Since there are insufficient data to accurately define normal glucose levels, the term ‘normoglycaemia’ should be used for glucose levels associated with low risk of developing diabetes or cardiovascular disease, thatis levels below those used to define intermediate hyperglycaemia.Recommendation 3 The current WHO definition for Impaired Glucose Tolerance (IGT) shouldbe maintained for the present.Consideration should be given to replacing this category of intermediatehyperglycaemia by an overall risk assessment for diabetes, cardiovasculardisease, or both, which includes a measure of glucose as a continuousvariable.

Definition and Diagnosis of diabetes mellitus and intermediate hyperglycemiaRecommendation 4 The fasting plasma glucose cut-point for Impaired Fasting Glucose (IFG)should remain at 6.1mmol/l.This decision was based on concerns about the significant increase in IFGprevalence which would occur with lowering the cut-point and the impacton individuals and health systems. There is a lack of evidence of anybenefit in terms of reducing adverse outcomes or progression to diabetesand people identified by a lower cut-point eg 5.6mmol/l (100mg/dl) havea more favourable cardiovascular risk profile and only half the risk ofdeveloping diabetes compared with those above the current WHO cutpoint. Lowering the cut-point would increase the proportion of peoplewith IGT who also have IFG but decreases the proportion of people withIFG who also have IGT.Consideration should be given to replacing this category of intermediatehyperglycaemia by an overall risk assessment for diabetes, cardiovasculardisease, or both, which includes a measure of glucose as a continuousvariable.Recommendation 5 1. Venous plasma glucose should be the standard method for measuringand reporting glucose concentrations in blood. However in recognitionof the widespread use of capillary sampling, especially in under-resourced countries, conversion values for capillary plasma glucose areprovided for post-load glucose values. Fasting values for venous andcapillary plasma glucose are identical.2. Glucose should be measured immediately after collection by near-patient testing, or if a blood sample is collected, plasma should be immediately separated, or the sample should be collected into a containerwith glycolytic inhibitors and placed in ice-water until separated priorto analysis.Recommendation 6 The oral glucose tolerance test (OGTT) should be retained as a diagnostictest for the following reasons: fasting plasma glucose alone fails to diagnose approximately 30% ofcases of previously undiagnosed diabetes, fan OGTT is the only means of identifying people with IGT, fan OGTT is frequently needed to confirm or exclude an abnormalityof glucose tolerance in asymptomatic people.An OGTT should be used in individuals with fasting plasma glucose 6.1–6.9mmol/l (110–125mg/dl) to determine glucose tolerance status.

IntroductionRecent estimates indicate there were 171 million people in the worldwith diabetes in the year 2000 and this is projected to increase to366 million by 2030 1. Diabetes is a condition primarily defined bythe level of hyperglycaemia giving rise to risk of microvasculardamage (retinopathy, nephropathy and neuropathy). It is associatedwith reduced life expectancy, significant morbidity due to specificdiabetes related microvascular complications, increased risk ofmacrovascular complications (ischaemic heart disease, stroke andperipheral vascular disease), and diminished quality of life. TheAmerican Diabetes Association (ADA) estimated the national costsof diabetes in the USA for 2002 to be US132 billion, increasing to US192 billion in 20202.Since 1965 the World Health Organization (WHO) has published guidelines for the diagnosis and classification of diabetes. These were lastreviewed in 1998 and were published as the guidelines for the Definition, Diagnosis and Classification of Diabetes Mellitus3. Since then moreinformation relevant to the diagnosis of diabetes has become available.In addition, in 2003, the ADA reviewed its diagnostic criteria4. While thecriteria for the diagnosis of diabetes and Impaired Glucose Tolerance (IGT)remained unchanged, the ADA recommended lowering the threshold forImpaired Fasting Glucose (IFG) from 6.1mmol/l (110mg/dl) to 5.6mmol/l(100mg/dl) 4. In view of these developments WHO and the InternationalDiabetes Federation (IDF) decided that it was timely to review its existingguidelines for the definition and diagnosis of diabetes and intermediatehyperglycaemia.Accordingly, WHO appointed an internal Guideline Steering Group andconvened a Technical Guideline Development Group. Membership ofthese committees is shown in Appendix 1. A meeting of the Technical

Definition and Diagnosis of diabetes mellitus and intermediate hyperglycemiaGuideline Development Group was held at WHO headquarters in Genevaon November 4–6, 2005. The specific aims of the meeting were to review relevant data which addressed and could inform the review of thediagnostic criteria for: Diabetes Impaired glucose tolerance (IGT) Impaired fasting glucose (IFG) (in particular the 2003 ADA revisedcriteria).The definition of the Metabolic Syndrome was outside the brief of thisreview and was therefore not considered.In addressing these aims and in formulating recommendations, the Technical Guideline Development Group took into account the following WHOguiding values for guideline development: A population perspective, not primarily an individual perspective Scientific integrity with evidence on efficacy Feasibility Cost-effectiveness and opportunity costs Sensitivity to local contexts Transparency A primary audience of health policy makers

backgroundWHO has published four previous Technical Reports relating to diabetes in 19655, 1980 6, 19857 and 1999 3. Over this period there havebeen significant changes in the diagnostic criteria and classificationof diabetes and intermediate hyperglycaemia. The diagnostic criteriaused over this period are summarised in Appendix 2.Current diagnosticcriteriaThe current diagnostic criteria used for the diagnosis of diabetes andintermediate hyperglycaemia have been in place globally for almost adecade and are widely accepted. However, in 2003 the ADA modified itsrecommendations resulting in discrepancies between its recommendations and those of the WHO.Although attention has focussed on the difference in fasting plasma glucose levels for defining IFG, there are a number of important differencesbetween the ADA and WHO recommendations which may result in differences in an individual’s classification of glucose tolerance (see Appendix3). These include: fasting plasma glucose value used to define IFG inclusion of 2–h plasma glucose value in defining IFG requirement for fasting plasma glucose level in defining IGTfasting plasma glucose as the recommended method for diagnosingasymptomatic diabetes by ADA whereas WHO recommends the oral glucose tolerance test.These discrepancies have implications for the individual and for population prevalence estimates. For example people who fall into the ADAcategory of IFG could include people with IGT or diabetes if a 2–h plasmaglucose is not measured, and ADA defined IGT could include diabetes if afasting plasma glucose is not measured.The objective of the Technical Guideline Development Group meeting wasto examine the evidence on the following issues related to the diagnosisof diabetes and intermediate hyperglycaemia:

1issueShould the currentdiagnostic criteriafor diabetes bechanged?There are important differences between (i) defining diabetes toidentify an individual with diabetes and the consequent clinical andsocial implications of this diagnosis and (ii) defining diabetes forepidemiological purposes. In the former the diagnosis requires careful substantiation with retesting on another day unless the personis symptomatic and the plasma glucose is unequivocally elevatedwhereas in epidemiological studies repeat testing is rarely performed. When repeat testing is performed, approximately 75% ofpeople with diabetes detected in epidemiological studies are confirmed to have clinical diabetes8,9.In the absence of a more specific biological marker to define diabetes,plasma glucose estimation remains the basis of diagnostic criteria. Otherconsiderations also impact on how a diagnosis of diabetes should bemade. Does diabetes represent the upper end of a continuous distributionof glucose or a discrete entity? While hyperglycaemia is an importantprognostic parameter, is it the central or most important feature determining prognosis in people with hyperglycaemia? In terms of screeningasymptomatic people, how can we best balance the me

WHo library Cataloguing-in-publication Data Definition and diagnosis of diabetes mellitus and intermediate hyperglycemia : report of a WHO/IDF consultation.

Diagnostic performance of radiovisiography in combination .