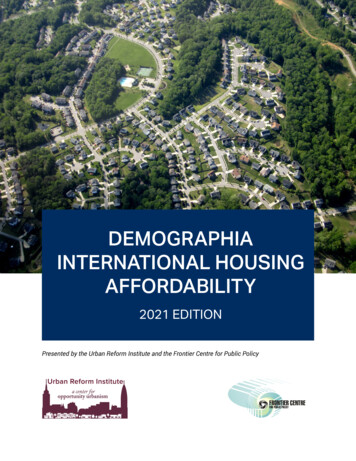 Urban Reform Institute (URI)is a 501(c)(3) national think tank. URI focuses on the studyof cities as generators of upward mobility.For a comprehensive collection of URIpublications and commentary, go tourbanreforminstitute.orgThe Frontier Centre for Public Policy (FCPP) is an independentCanadian public policy think tank based in western Canada whosemission is to explore options for the future by undertaking researchand education that supports economic growth and opportunity.Our research aims to analyze current affairs and public policiesand develop effective and meaningful ideas for good governanceand reform. We provide a platform for public debate and engagewith the public through our numerous publications and events.For a comprehensive collection of FCPPpublications and research, visitfcpp.org

IntroductionIntroductionThe Urban Reform Institute and the Frontier Centre for Public Policy are pleased to present the2021 edition of Demographia International Housing Affordability. This report provides housingaffordability ratings, using the median multiple, a measurement of income in relation to housingprices, or 92 major markets (metropolitan areas) in eight nations for the third quarter of 2020.In this year of the global pandemic and lockdowns, it is not surprising that housing affordability —given the large influx of new buyers, particularly in suburban and outlying areas — has continuedto deteriorate. As a result many low-income and middle-income households who already havesuffered the worst consequences from housing inflation will see their standards of living furtherdecline.The affordability issue is particularly critical due to the strong increase in remote working (telework) during the pandemic which is accelerating the movement to more affordable places. It willlikely also help flatten or even reduce prices in the highest cost housing markets as other households seek less costly housing elsewhere.We hope that the losses sustained during the pandemic will be quickly reversed and the increasing inequality attributable to higher house prices will become a thing of the past.Wendell Cox is the author, having previously co-authored the annual Demographia InternationalHousing Affordability Survey, with Hugh Pavletich of Performance Urban Planning. Cox is a seniorfellow at both the Frontier Centre for Public Policy and the Urban Reform Institute.Charles BlainPresidentUrban Reform Institute.3900 Essex Lane, Suite 1200Houston, Texas 77027Peter HollePresidentFrontier Centre for Public Policy203-2727 Portage AvenueWinnipeg, Manitoba R3J 0R22021 DEMOGRAPHIA INTERNATIONAL HOUSING AFFORDABILITY 5

2 International Major Market Housing Affordability in 2020At the other end of the scale, there are 36 severely unaffordable major housing markets. The leastaffordable are Hong Kong (20.7), Vancouver (13.0), Sydney (11.8), Auckland (10.0), Toronto (9.9),Melbourne (9.7), San Jose (9.6), San Francisco (9.6), Honolulu (9.1), London (8.6) and San Diego(8.0).The last year has involved material setbacks, mostly due to the impact of the pandemic (Section4), which has led to a home buying boom in some areas while suppressing incomes. Housingaffordability deteriorated by more than 1.0 median multiple points in just one year, — the equivalent of one year’s pre-tax median household income — in Vancouver, San Jose, San Francisco andHonolulu, with the greatest deterioration in Auckland (1.4 points) and Toronto (1.3 points). Thedeterioration was from 0.5 to 1.0 --- six months of household income --- in Sydney and San Diego.Virtually all of the markets with severely unaffordable housing have urban containment policiesthat severely restrict building on the periphery (Section 3).The number of housing markets that have become severely unaffordable in the United Statesand Canada has grown steadily since 2004. Housing affordability deteriorated the equivalentof six years of annual household incomes in Toronto, between two and three years in Montreal,Portland and Ottawa-Gatineau and by 1.5 to 2.0 points in Seattle and Denver (Figure 1). By 2004,all of the major markets of Australia and New Zealand had become severely unaffordable.1 Descent to Severely Unaffordable Ratings2021 DEMOGRAPHIA INTERNATIONAL HOUSING AFFORDABILITY 8

3 Decades of Worsening Housing Affordability3 Decades of Worsening Housing AffordabilityHistorically, housing affordability had been similar between nations until a few decadesago. For example, national price-to-income ratios were 3.0 or less in Australia, Canada,Ireland, New Zealand, the United Kingdom and the United States until the late 1980s or1990s,. However since that time, housing affordability has deteriorated significantlyand by 2019 national median multiples had increased to 4.0 in the United States andCanada, nearly 6.0 in Australia and 7.0 in New Zealand (Figure 2).Median Multiple Range: 1950-2020: United2 International House Price to Income Ratios 3StatesBefore, there was relatively little difference inhousing affordability measured against incomes among housing markets. For example,in the United States, all but one of today’s 53major metropolitan areas in the United Stateswere “affordable” in 1970 (New York was the5exception, with a median multiple of 3.2.)The difference between the least affordableand most affordable markets, measured inmedian multiple points, expanded from 1.7 in1970 to 3.5 in 2000 and 7.2 in 2020 --- morethan four times that of 1970 (Figure 3, above).4 Median Multiple Range: 1971-2020: CanadaIn Canada, the difference among the six major markets was 1.5 median multiple points in 1971,rose to 2.5 in the mid-2000s and is now 9.3, more than six times that of 1971 (Figure 4). In Australia,6the maximum difference was 2.0 median multiple points in 1981, which had risen to 5.8 in 2020.56Derived from data reported in the 1970 United States census.By 2004, all of the major markets in Australia and New Zealand had become severely unaffordable, unlike theUnited States and Canada.2021 DEMOGRAPHIA INTERNATIONAL HOUSING AFFORDABILITY 9

3 Decades of Worsening Housing AffordabilityThese trends have been more pronounced since the early 2000s. The earliest DemographiaInternational Housing Affordability Surveys rated up to 16 major markets in Canada and theUnited States as “affordable,” with a median multiple of 3.0 or less. By 2019, the number haddropped to 10, and, as noted above, has fallen even further in the pandemic year of 2020, withonly four markets rated “affordable.”A considerable body of research associates worsening housing affordability with the implemen7tation of stronger land use regulation. At the same time, many housing markets have adoptedperhaps the most stringent land use regulation, urban containment at the housing market level,which is associated with substantially higher land costs.URBAN CONTAINMENTThe largest housing affordability differences between major metropolitan areas aroseas significant restrictions on urban fringe housing development were applied. Thesemeasures are called “urban containment” and include “growth management” and“compact city” policies. A principal purpose of urban containment is to curb the physicalexpansion of urban areas – that is, conversion of rural land to urban land, or what somerefer to as “urban sprawl.” This can result in far higher housing costs.Urban containment’s prototypical strategy is urban growth boundaries encircling urbanareas. Urban containment can render it impossible to profitably build tracts of housingaffordable to middle-income households due to much higher land prices. Accordingto urban planning literature: “Urban development is steered t

2021 edition of Demographia International Housing Affordability. This report provides housing affordability ratings, using the median multiple, a measurement of income in relation to housing prices, or 92 major markets (metropolitan areas) in eight nations for the third quarter of 2020. In this year of the global pandemic and lockdowns, it is not surprising that housing affordability — given .

Exploring the Affordability of Water Services within and across .