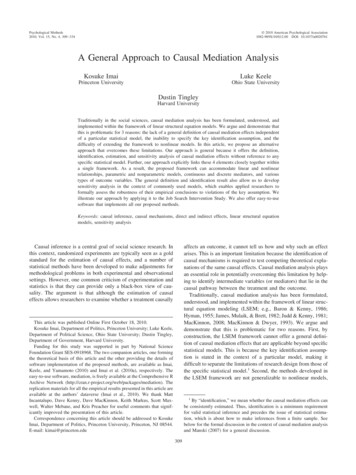 Psychological Methods2010, Vol. 15, No. 4, 309 –334 2010 American Psychological Association1082-989X/10/ 12.00 DOI: 10.1037/a0020761A General Approach to Causal Mediation AnalysisKosuke ImaiLuke KeelePrinceton UniversityOhio State UniversityDustin TingleyHarvard UniversityTraditionally in the social sciences, causal mediation analysis has been formulated, understood, andimplemented within the framework of linear structural equation models. We argue and demonstrate thatthis is problematic for 3 reasons: the lack of a general definition of causal mediation effects independentof a particular statistical model, the inability to specify the key identification assumption, and thedifficulty of extending the framework to nonlinear models. In this article, we propose an alternativeapproach that overcomes these limitations. Our approach is general because it offers the definition,identification, estimation, and sensitivity analysis of causal mediation effects without reference to anyspecific statistical model. Further, our approach explicitly links these 4 elements closely together withina single framework. As a result, the proposed framework can accommodate linear and nonlinearrelationships, parametric and nonparametric models, continuous and discrete mediators, and varioustypes of outcome variables. The general definition and identification result also allow us to developsensitivity analysis in the context of commonly used models, which enables applied researchers toformally assess the robustness of their empirical conclusions to violations of the key assumption. Weillustrate our approach by applying it to the Job Search Intervention Study. We also offer easy-to-usesoftware that implements all our proposed methods.Keywords: causal inference, causal mechanisms, direct and indirect effects, linear structural equationmodels, sensitivity analysisaffects an outcome, it cannot tell us how and why such an effectarises. This is an important limitation because the identification ofcausal mechanisms is required to test competing theoretical explanations of the same causal effects. Causal mediation analysis playsan essential role in potentially overcoming this limitation by helping to identify intermediate variables (or mediators) that lie in thecausal pathway between the treatment and the outcome.Traditionally, causal mediation analysis has been formulated,understood, and implemented within the framework of linear structural equation modeling (LSEM; e.g., Baron & Kenny, 1986;Hyman, 1955; James, Mulaik, & Brett, 1982; Judd & Kenny, 1981;MacKinnon, 2008; MacKinnon & Dwyer, 1993). We argue anddemonstrate that this is problematic for two reasons. First, byconstruction, the LSEM framework cannot offer a general definition of causal mediation effects that are applicable beyond specificstatistical models. This is because the key identification assumption is stated in the context of a particular model, making itdifficult to separate the limitations of research design from those ofthe specific statistical model.1 Second, the methods developed inthe LSEM framework are not generalizable to nonlinear models,Causal inference is a central goal of social science research. Inthis context, randomized experiments are typically seen as a goldstandard for the estimation of causal effects, and a number ofstatistical methods have been developed to make adjustments formethodological problems in both experimental and observationalsettings. However, one common criticism of experimentation andstatistics is that they can provide only a black-box view of causality. The argument is that although the estimation of causaleffects allows researchers to examine whether a treatment causallyThis article was published Online First October 18, 2010.Kosuke Imai, Department of Politics, Princeton University; Luke Keele,Department of Political Science, Ohio State University; Dustin Tingley,Department of Government, Harvard University.Funding for this study was supported in part by National ScienceFoundation Grant SES-0918968. The two companion articles, one formingthe theoretical basis of this article and the other providing the details ofsoftware implementation of the proposed methods, are available as Imai,Keele, and Yamamoto (2010) and Imai et al. (2010a), respectively. Theeasy-to-use software, mediation, is freely available at the Comprehensive RArchive Network . Thereplication materials for all the empirical results presented in this article areavailable at the authors’ dataverse (Imai et al., 2010). We thank MattIncantalupo, Dave Kenny, Dave MacKinnon, Keith Markus, Scott Maxwell, Walter Mebane, and Kris Preacher for useful comments that significantly improved the presentation of this article.Correspondence concerning this article should be addressed to KosukeImai, Department of Politics, Princeton University, Princeton, NJ 08544.E-mail: [email protected] “identification,” we mean whether the causal mediation effects canbe consistently estimated. Thus, identification is a minimum requirementfor valid statistical inference and precedes the issue of statistical estimation, which is about how to make inferences from a finite sample. Seebelow for the formal discussion in the context of causal mediation analysisand Manski (2007) for a general discussion.309

310IMAI, KEELE, AND TINGLEYincluding logit and probit models, for discrete mediators andoutcomes as well as non- or semiparametric models.In this article, we propose a general approach that overcomesthese limitations. We use a single framework for the definition,identification, estimation, and sensitivity analysis of causal mediation effects without reference to any specific statistical model.First, following the recently published work (e.g., Jo, 2008; Sobel,2008), we place causal mediation analysis within the counterfactual framework of causal inference and offer the formal definitionof causal mediation effects. This definition formalizes, independent of any specific statistical models, the intuitive notion aboutmediation held by applied researchers that the treatment indirectlyinfluences the outcome through the mediator.Second, we slightly extend the result of Imai, Keele, andYamamoto (2010), who proved that under the sequential ignorability assumption the average causal mediation effects are nonparametrically identified (i.e., can be consistently estimated without any functional form and distributional assumptions).Sequential ignorability consists of two assumptions: (a) Conditional on the observed pretreatment covariates, the treatment isindependent of all potential values of the outcome and mediatingvariables, and (b) the observed mediator is independent of allpotential outcomes given the observed treatment and pretreatmentcovariates. Such a nonparametric identification analysis is important because it establishes a minimum set of assumptions requiredfor mediation effects to be interpreted as causal without respect tostatistical models used by researchers.Third, using our nonparametric identification result, we developgeneral estimation procedures for causal mediation effects that canaccommodate linear and nonlinear relationships, parametric andnonparametric models, continuous and discrete mediators, andvarious types of outcome variables. In the literature, some haveextended the LSEM framework to these settings (e.g., Li, Schneider, & Bennett, 2007; MacKinnon, 2008; MacKinnon, Lockwood,Brown, Wang, & Hoffman, 2007; Wang & Taylor, 2002). Ourapproach encompasses many of the existing methods as specialcases, thereby accomplishing many of future statistical tasks identified in a recent review article by MacKinnon and Fairchild(2009).The last and yet perhaps most important contribution of ourproposed approach is a set of sensitivity analyses we develop forstatistical models commonly used by applied researchers. Sensitivity analysis allows researchers to formally quantify the robustness of their empirical conclusions to the potential violation ofsequential ignorability, which is the key and yet untestable assumption needed for identification. The fundamental difficulty inthe causal mediation analysis is that there may exist unobservedconfounders that causally affect both the mediator and the outcomeeven after conditioning on the observed treatment and pretreatmentcovariates. Therefore, assessing the sensitivity of one’s empiricalfindings to the possible existence of such confounders is requiredin order to evaluate the validity of any mediation study. In theLSEM framework, Imai, Keele, and Yamamoto (2010) proposed astraightforward way to check how severe the violation of the keyidentifying assumption would need to be for the original conclusions to be reversed. We generalize this sensitivity analysis so thatit can be applied to other settings.Because our approach is developed without any reference to aparticular statistical model, it is applicable across a wide range ofsituations. In this article, we illustrate its applicability using avariety of cross-section settings. Our general approach also allowed us to develop the easy-to-use software, mediation, which isfreely available as an R package (R Development Core Team,2009) at the Comprehensive R Archive Network.2 All the analysespresented in this article are conducted with this software. Thedetails about the software implementation and its usage are givenin a companion article (Imai, Keele, Tingley, & Yamamoto,2010a). Future research should address the application of ourapproach to the panel data settings (e.g., Cole & Maxwell, 2003;MacKinnon, 2008, Chapter 8), and multiple (e.g., MacKinnon,2000; Preacher & Hayes, 2008) and multilevel (e.g., Krull &MacKinnon, 1999) mediators, all of which are beyond the scope ofthe current article.A Running Example: The Job Search InterventionStudy (JOBS II)To motivate the concepts and methods that we present, we relyon an example from the psychology literature on mediation anduse the JOBS II for our illustration. JOBS II is a randomized fieldexperiment that investigates the efficacy of a job training intervention on unemployed workers. The program is designed not only toincrease reemployment among the unemployed but also to enhancethe mental health of the job seekers. In the experiment, 1,801unemployed workers received a prescreening questionnaire andwere then randomly assigned to treatment and control groups.Those in the treatment group participated in job skills workshopsin which participants learned job search skills and coping strategies for dealing with setbacks in the job search process. Those inthe control condition received a booklet describing job search tips.In follow-up interviews, two key outcome variables were measured: a continuous measure of depressive symptoms based on theHopkins Symptom Checklist and a binary variable, representingwhether the respondent had become employed.Researchers who originally analyzed this experiment hypothesized that workshop attendance leads to better mental health andemployment outcomes by enhancing participants’ confidence intheir ability to search for a job (Vinokur, Price, & Schul, 1995;Vinokur & Schul, 1997). In the JOBS II data, a continuousmeasure of job search self-efficacy represents this key mediatingvariable. The data also include baseline covariates measured before administering the treatment. The most important of these isthe pretreatment level of depression, which is measured with thesame methods as the continuous outcome variable. There are alsoseveral other covariates that are included in our analysis (as well asin the original analysis) to strengthen the validity of the keyidentifying assumption of causal mediation analysis. They includemeasures of education, income, race, marital status, age, sex,previous occupation, and the level of economic hardship.Statistical Framework for Causal Mediation AnalysisIn this section, we describe the counterfactual framework ofcausal inference, which is widely used in the statistical literature2The web address is http://cran.r-project.org/web/packages/mediation.

CAUSAL MEDIATION ANALYSIS(e.g., Holland, 1986) and is beginning to gain acceptance inpsychology (e.g., Jo, 2008; Little & Yau, 1998; MacKinnon, 2008,Chapter 13; Schafer & Kang, 2008). Following prior work (e.g.,Imai, Keele, & Yamamoto, 2010; Pearl, 2001; Robins & Greenland, 1992), we define causal mediation effects using the potentialoutcomes notation. We then review the key result of Imai, Keele,and Yamamoto (2010) and show a minimum set of the conditionsunder which the product of coefficients method (MacKinnon,Lockwood, Hoffman, West, & Sheets, 2002) and its variants yieldvalid estimates of causal mediation effects. Finally, we brieflyexplain how our approach differs from the existing approach basedon the instrumental variable methods of Angrist, Imbens, andRubin (1996). As we noted earlier, the strength of this frameworkis that it helps to clarify the assumptions needed for causal mediation effects without reference to specific statistical models.The Counterfactual FrameworkIn the counterfactual framework of causal inference, the causaleffect of the job training program for each worker can be definedas the difference between two potential outcomes: one that wouldbe realized if the worker participates in the job training programand the other that would be realized if the worker does notparticipate. Suppose that we use Ti to represent the binary treatment variable, which is equal to 1 if worker i participated in theprogram and to 0 otherwise (see later sections for an extension tononbinary treatment). Then, we can use Yi(t) to denote the potential employment status that would result under the treatment statust. For example, Yi(1) measures worker i’s employment status if theworker participates in the job training program. Although there aretwo such potential values for each worker, only one of them isobserved; for example, if worker i 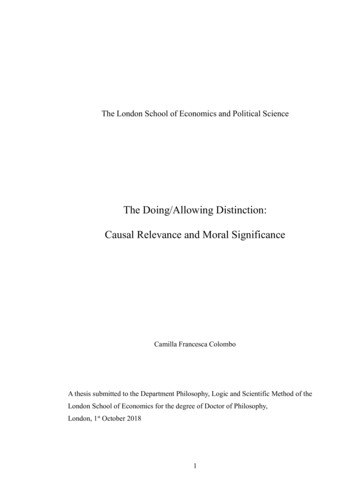 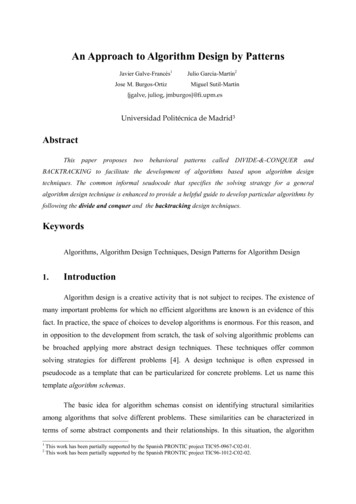 An Approach to Algorithm Design by Patterns 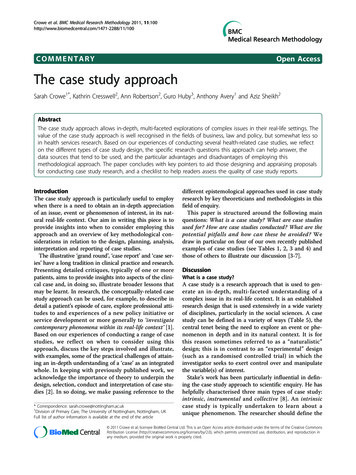 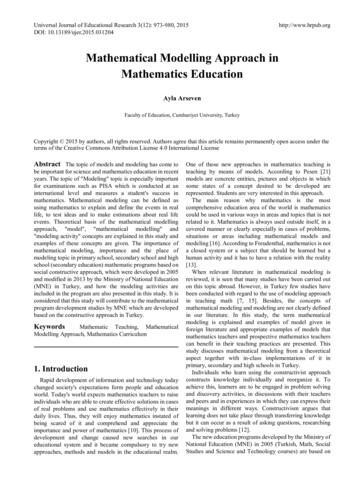 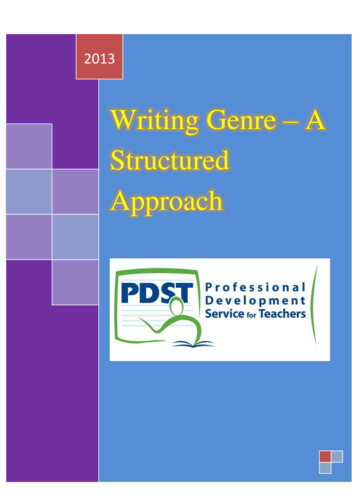 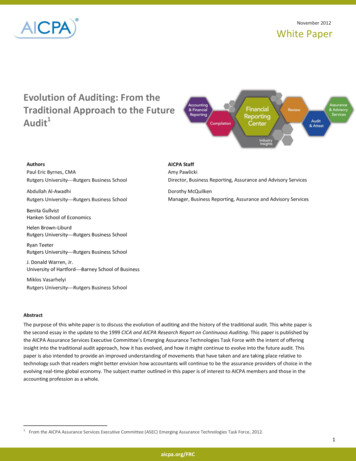 Evolution of Auditing: From the Traditional Approach to . 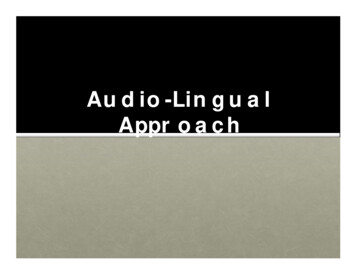 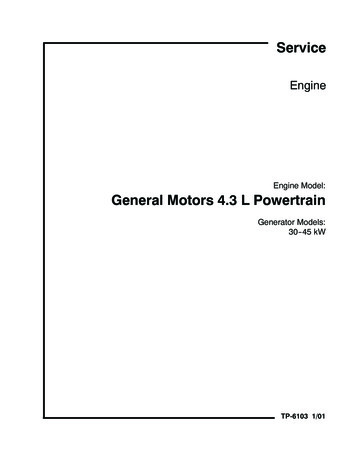 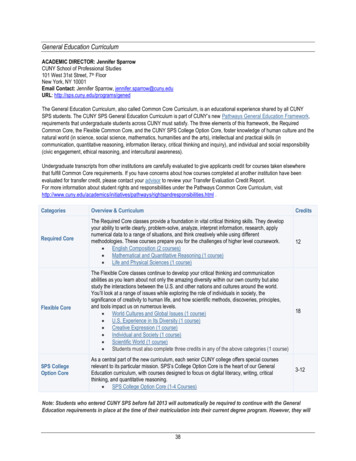 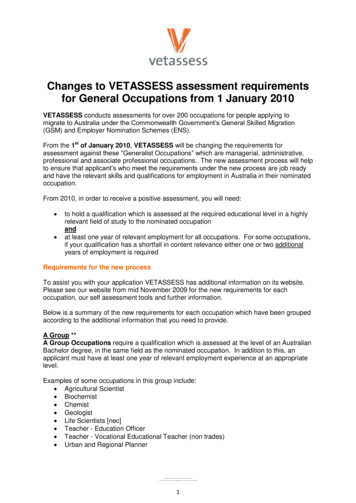 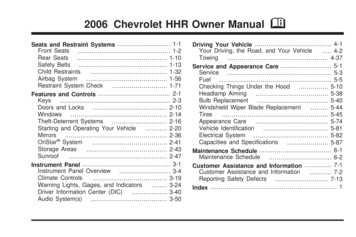 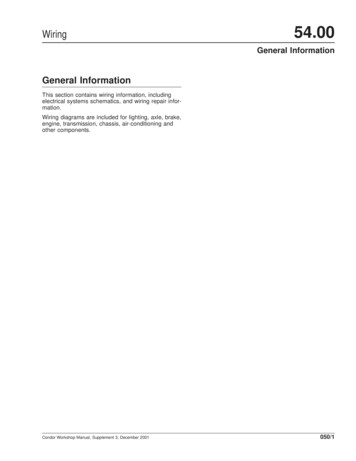