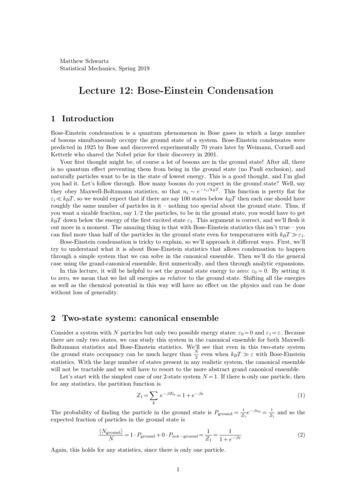 Two-state system: canonical ensemble3This plot demonstrates Bose-Einstein condensation. With Maxwell-Boltzmann statistics, thetemperature has to be very low to get the lowest state to have an appreciable lling fraction.At temperature kBT & " both the ground state and the rst excited state are around equallyNpopulated so hNgroundi 2 . In contrast, with Bose-Einstein statistics, a signi cant fraction of thethe particles are in the ground state even well above the temperature kBT ". For example, withNat kBT 10 " " we nd 90% of the atoms are in the ground state for Bose-Einstein statistics, butonly 52% for Maxwell-Boltzmann statistics. This demonstrates Bose-Einstein condensation.Bose-Einstein condensation is a phase transition whereby the ground state become highlyoccupied. What is the critical temperature for this to occur? There is only two dimensionlessk Tnumbers we can work with B" and N . We want N to be large, N 1. Then we can expand inkBTk Ttwo limits " N (i.e. "N 1) and B" N (i.e. "N 1). Expanding Eq. (10) in the rstlimit gives BEhNgroundi 1N"kBT N(11)N2 12kBT"hN BEihN MBi1This is the true high-temperature limit, where the classical behavior ground! ground 2 isNNkBTapproached as T ! 1. In the second limit N " 1, the temperature is large, but not toolarge, and the expansion gives a di erent result BEhNgroundikBTkBT 1¡ N(12)NN""This limit shows the growth ofto Eq. (10) looks likeBEhNgroundiNtoward 1 as T ! 0. The comparison of these approximationsFigure 2. The approximations to the Bose-Einstein cuve in Eqs. (11) and (12).The crossover point is roughly where the approximations used for our expansions break down.N"The rst term is the same order as the second term in Eq. (11) when kBT 6 . For Eq. (12) theN"N"crossover is at kBT N". Thus we nd a critical temperature Tc 6k k for this two state modelBBindicating the onset of Bose-Einstein condensation. (The crossover point in this 2-state exampleis not at a precise temperature, as you can see from the plot. TC will become precise when weconsider a realistic system with a large number of states in the next section.)To emphasize how strange Bose-Einstein condensation is, remember that at kBT " we shouldbe able to use e¡ " 1 independent of N . That is, the ground state and rst excited state shouldhave pretty similar thermodynamic properties and occupancy at high temperature. This is notwhat we are nding. Instead, for N 10 million, with a temperature 1 million times the excitedstate energy, 90% of the atoms are in the ground state and only 10% are in the excited state.Now, this 2-state model is not a realistic approximation to any physical system. It turns out toBEbe very di cult to calculate hNgroundi in the canonical ensemble for a realistic system that has anin nite number of states. The di culty is that we have to count the number of ways of allocatingN particles to the states, and then to perform the sum over occupancies of the ground state timesBoltzmann factors. It turns out to be much easier to compute the general case using the grandcanonical ensemble with instead of N , as we will now see.

4Section 33 Grand canonical ensembleWith Bose-Einstein statistics, we determined that using the grand canonical ensemble the expectednumber of particles in a state i is1hnii (" ¡ )(13)e i¡1with "i the energy of the state i. So the expected number of particles in the ground state ("i 0) ishNgroundi 1e¡ ¡1(14) Recall that for Bose gases, will always be lower then all the energies (i.e. 0 when "0 0).We can see this explicitly from the plot.We can invert Eq. (14) to solve for in terms of hNgroundi:e¡ 1 1hNgroundi(15)Our strategy will then be to nd the ground state occupancy by using the constraint the the totalnumber of particles is N . That is, we will computeN Xihnii Xi1"ie¡ ¡ 1e Xie 11"i 1¡1i(16)hNgroundhNiOnce we work out the "i we can do the sum numerically or analytically and therefore nd ground.NBefore beginning the calculation, let us quickly ask about the non-ground state occupancies.Can they be large too? Note that for the ground state, the occupancy is large when 0 "0: itis in this limit that hNgroundi blows up. For excited states, we would need "i. However, hasan upper bound of "0 0, so cannot get arbitrarily close to "i and therefore condensation cannothappen in any excited state. The ground state is special.3.1 Exact numerical solutionhNiNow let us calculate N , and hence ground. Bose-Einstein condensation is relevant at low temperNature, where particles are non-relativistic. So consider a non-relativistic gas of monatomic bosonic atoms in a 3D box of size L. The allowed wavevectors of the system are kn L n just like for photons as always. In a non relativistic system, the energies areor phonons, and the momenta are p k"n n2 k 2 2 2 n2m 2mL2(17)We have set the ground state to "0 0 (rather than "0 mc2), since the absolute energy scale willbe irrelevant. Another useful number is the gap to the rst excited state"1 So that 2 2 2 2(1; 0; 0)2 22mL2mL2"n "1n2(18)(19)

Grand canonical ensemble5Then, from Eq. (16) we getN 1Xnx;ny ;nz 0e "1(n2x n2y nz2)11hNground 1¡1i(20)This formula lets us compute N given hNgroundi and "1. For example, if hNgroundi 80 and"T 10 k 1 then doing the sum numerically gives N 167.5. This means with 167.5 particles at"BT 10 k 1 , then 80 will be in the ground state.BWhat we really want is to specify N and T and nd hNgroundi. Do get this function, we needto do the sum in Eq. (20) and then solve for hNgroundi in terms of "1 and N . Unfortunately, wecannot do the sum exactly, but at least we can do it numerically. For N 100 we nd the numericalhNisolution for groundhas the form (see the Mathematica notebook on canvas)NFigure 3. Exact numerical result for the ground state occupancy in a Bose system with N 100.I added to the plot the prediction using Maxwell-Boltzmann statistics. For MB statistics, we dropall the factors of 1. So, hNgroundi e and so Eq. (20) becomesXX2221 N hNie¡ "1(nx ny nz)(21)ground1"1(n2x n2y nz2)nx;ny ;nz enx;ny ;nzhNigroundThese sums can be done numerically with the result is plotted alongside the BE result in Fig. 3. 3/2hN MB i4"1If we turn the sum into integrals, then ground which looks a lot like the exact resultN kBTthat is plotted.For di erent N the curve shifts, but looks qualitatively the same. After a little ddling (inspiredby the analytic result below), we see that if we plot the ground state occupancy as a function ofkBTthe result is essentially independent of N for the Bose-Einstein case:2/3N"1Figure 4. Pulling out a factor of N 2/3 makes the ground state occupancy essentially independent of N .

6Section 33.2 Approximate analytical solutionHaving determined the exact solution numerically, let us proceed to use an analytical approach todetermine some scaling relations and the transition temperature.As with the phonon or photon gas, we rst trasform the sum to an integral viaX 1Z 1!4 n2 dn(22)8 0 n18where the comes from n being a vector of whole numbers, as in the phonon or photon case. Wewant to convert n to ", which we can do using using Eq. (19), " "1n2 so(23)d" 2"1ndnSoX n! 2As before we write this aswhereZ1nndn 0 2X nZr10" d" "1 2"1 4"3/21Z1p" d"(24)0Z! g(")d"(25) p"3/24"1(26)g(") is the density of states.At this point, we would like to integrate over " to nd NZ 1Z 1p 1N g(")hn"i 3/2d" " ("¡ )e¡1004"1(27)This is a little too quick, however. The problem is that converting a sum to an integral can onlybe justi ed if we do not care at all about the discreteness. For Bose-Einstein condensation we docare about the discreteness: the ground state, as we have seen, is qualitatively di erent from theother states.Although discreteness is important for the ground sates, for the excited states, even the rstexcited state, there is no issue the chemical potential can never approach any of their energiesand so their occupancy numbers will never be unusually large. So let us proceed by taking thecontinuum limit for all but the ground state. Moreover, since e¡ 1 when hNgroundi & 1 which isthe region of interest, we can simply set 0 for the excited state calculation and Eq. (27) becomes 3/2Z 1p 1 kBThNexcitedi 3/2d" " " 3/2(28)4"1e ¡104"1¡3 where 3/2 2 2.61 with (z) the Riemann Zeta function.When does the approximation that 0 break down? It breaks down when hNgroundi 0, asyou can see from Eq. (14). As Nground ! 0 then ¡kBT ln(Nground) which goes to ¡1. WhenhNgroundi 0 then hNexcitedi N . Setting Eq. (28) equal to N we nd that our approximationbreaks down when 3/2 kBThNexcitedi 3/2 N(29)4"1We can equivalently write this as T Tc where the critical temperature Tc is is de ned by 3/2 3/2 kBTcmkBTcN 3/2 2.612V(30)4"18 2 where with "1 from Eq. (18) was used. Solving f

Albert Einstein - The World As I See It